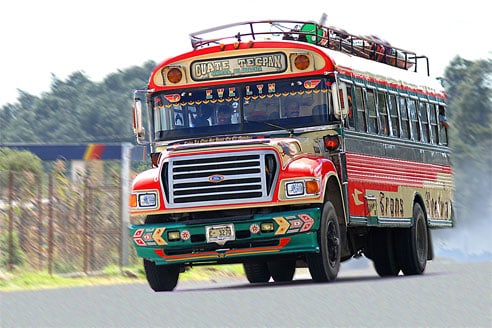 The shouts come from all angles, along just about every street in Guatemala. They’re accompanied by the scream of exhausted air brakes, the growl of engines far past their prime, the boom of exhaust pipes gasping for clear passage, and horns held in exclamation.

A roving whale of a vehicle clanks by in a blur of color and a Doppler whir of Latin pop. Typically, there is an emphatic exhale of black, noxious smoke every block or two, from which you are either shielding your face or waving at furiously to catch a ride.

For those of us who have traveled in Guatemala (and, subsequently, other Central American countries), the “Chicken Bus” is– whether taken as transportation or merely from distant observation– a memorable, if unusual, part of the experience.

READ MORE: 40 Things You Should Know Before Traveling to Guatemala

What is a Chicken Bus?

Many travelers have commuted via Chicken Bus long before ever making it abroad. This is because these colorful contraptions are, in fact, retired  school buses from the United States.

As seen in the documentary, La Camioneta(the local term for the vehicles), U.S. school buses are typically auctioned off after around 10 years or 150,000 miles.

There’s an entire industry of people who travel to these auctions to acquire them for $2000 or less, then drive them back to Guatemala or other Central American countries. There, the school bus transforms into something vastly different.

Upon arrival, these buses are repaired… though one might doubt it when riding in one. The familiar yellow paint is replaced by wild, colorful designs.

The windshields are plastered with silvery Christian slogans and the insides jazzed up with Christmas lights, tassels, and posters of nude female silhouettes and/or Che Guevara.

Murals and names of girlfriends are airbrushed on the exterior, the exit doors occasionally plastered with wrestling posters, and there’s usually a cranked-up sound system installed.

Once renovated, Chicken Buses become the most common (often only) form of public transportation.

They’re often family businesses and usually staffed by two people– a grumpy driver on his cellphone and an ayudante, who shouts out destinations from the opened doorway and collects fares, delivering change from a huge wad of cash stashed in their front pockets. They also help little old ladies with baggage, as well as stowing boxes and crates for people.

Why Is It Called a Chicken Bus?

The term “Chicken Bus” originates in Guatemala and comes from the fact that passengers would often transport live animals on them. This doesn’t happen often anymore.

These days, the bus TV has hit the scene: On a recent trip I got to watch a solid hour of Spanish-language hair band videos. Sure, a clucking chicken might’ve been an improvement, but it was a cultural experience I won’t soon forget!

While the name remains nearly ubiquitous among tourists and expats, most locals who use this form of transportation aren’t familiar with the term “chicken bus” (nor its translation). Here in Guatemala, the closest thing to an actual chicken I’ve ever seen on board a bus is a to-go box from Pollo Compero, the nation’s favorite fast food joint.

However, to my delight, I have been on two buses during my travels— one in El Salvador and the other in Colombia— that did officially warrant the handle.

In both of these cases, the fowl was roaming about the bus freely, which I guess might please some “free range” supermarket shoppers.

The Dark Side of Chicken Buses

Despite their vibrant designs, these rolling party wagons have an notorious reputation for being quite dangerous.

I’ll never forget taking my mother on one from Guatemala City to Antigua and laughing hysterically as she struggled to stay upright. Chicken Bus drivers are notoriously bold with their speed and confidence going around curves.

My mother was sliding all over the seat, unable to gain traction on the vinyl upholstery. However, due to a general lack of seat belts, standing-room-only passengers crammed into the aisles and narrow mountain roads, bus accidents tend to be nasty and unforgiving.

But the bigger danger lies with inner-city buses, which usually pass through gang territory. Drivers are expected to pay tolls in these areas and are often victims of violence, making it one of the most perilous jobs in the world.

Passengers are often robbed– sometimes the entire busload. Our rule when living in Guatemala City was to always be home before dark, or else find a cab.

On one of my first chicken bus trips, the driver shouted something right after we left the station. My wife and I had rudimentary Spanish skills then, so we were confused when everyone laid down on the floor and we were told (via charades) to do the same.

We stayed that way, both giggling endlessly, for half an hour as the bus swerved through the city.

Later we found out that this was so that the bus would look empty as we drove through gang neighborhoods and would not be robbed.

Nevertheless, Chicken Buses are by far the cheapest means of getting around Guatemala, and are typically packed from steps to emergency exit.

An Ode to the Chicken Bus

Despite the darker elements of their reputation, no matter how bad the bulk of them need a major engine overhaul, chicken buses are without a doubt a symbol of Guatemala.

They’ve been the subject of several photography book and have a full-length, award-winning documentary devoted to them.

There is even a beloved song circulating on YouTube, which was written and performed by a friend of mine!

And really, why not? The Chicken Bus is stunning and somewhat startling to behold, as well as a complicated statement about the current state of the world’s economic disparity.

For some they may represent the wastefulness and affluence of the United States, because these cast-aside buses go on for years once they make their way down here.

For others they may exemplify the ingenuity and resilience of Guatemala. Like so many things in this country, Chicken Buses are hilarious at some times and heartbreaking at others.

Regardless of how you see it, Guatemala just wouldn’t be Guatemala without the unusual cultural phenomenon known as the Chicken Bus. -Jonathon Engels

Eco-Building Blocks for a Growing Nation: A New Wave of Construction in Guatemala