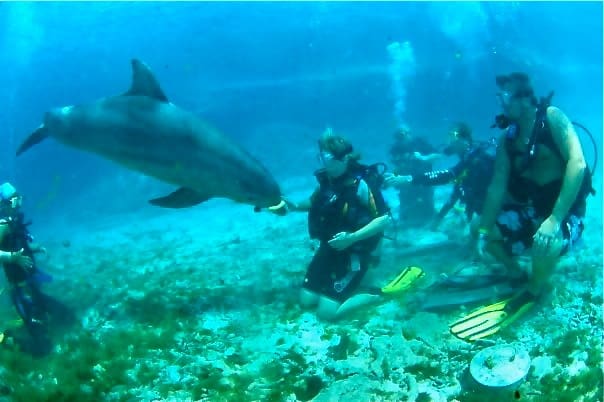 How Mary Conquered Her Fear of Water

I’ve had a crippling fear of water (specifically, putting my face into it) ever since I was little.

For two weeks each summer, I stayed with my grandparents in New Hampshire on the banks of the Merrimack River. My grandmother would watch us play in the water, but couldn’t swim, so she was terrified that we’d go under and she wouldn’t be able to save us. You could see the tension in her eyes, encompassing her entire body. Her fear of water became my own, and I became more and more cautious every time I entered the water.

I also vividly remember getting caught up in the surf of the Atlantic Ocean at the Jersey Shore as a child. I was sitting at the shoreline and a huge wave tumbled me. I got caught up in wave after wave, rolling with the surf, and couldn’t find my way up for what seemed like a very long time. Even though I was close to the shore, it was very scary. Is it any wonder that even the thought of putting my face in the water started giving me the heebie-jeebies?

I’d gone snorkeling a few times in my life, but always walked in gradually from the shore, and always stayed in shallow depths. But in February 2009, three months after Bret and I met, we went snorkeling in Hawaii‘s Kealakekua Bay. I was extremely nervous about jumping from the Zodiac into the open water. If something went wrong, it didn’t look like there was an easy way to climb back in the boat or hold onto anything. My fear of water had never been stronger.

So when it was time to snorkel and everyone else jumped into the water, I had a full-blown panic attack. I couldn’t breathe. My heart was beating so fast, it felt like it was gonna jump out of my chest. I felt like I was going to be swallowed up by my fear. I choked back tears, and I felt helpless to make even the slightest move towards the water.

At the same time, I didn’t want to miss out, and I didn’t want Bret to see my fear. So I gathered just enough courage to jump in the water, and then I panicked again. I felt frantic, with an out-of-control loop of thoughts in my mind. My tremendous fear battled with embarrassment. Finally, with a lot of coaching and encouragement, a few minutes to collect myself, and a death grip on Bret’s hand, we were snorkeling together for the first time.

The next day we snorkeled with sea turtles, and it was much better because we walked in from the shore.  I wore a life vest (even though I can swim) and held Bret’s hand, as I was nervous to go to a place where I couldn’t touch. But the sea turtles were incredibly curious and would swim right up to us. In that moment, I forgot how scared I was and got lost in amazement at these gorgeous, graceful 300 lb creatures. Perhaps that reward was what convinced me to push myself even further on our next trip.

The thought of diving 15 ft down in Curacao’s Dolphin Academy made me totally terrified. You had to be completely self-sufficient with your own Self-Contained Underwater Breathing Apparatus, and our brief hour of classroom instruction was nowhere near complete enough to help me conquer my fear of water. Getting in (and under) the water was really rough, but as soon as I settled in and saw the fish and coral of so many different colors, I started to calm down a bit (though I still held a death grip on the Divemaster’s hand to steady my nerves).

When the dolphins started interacting with us, I remember giggling and feeling an overwhelming sense of joy.  Slowly, I was finally able to let go of the Divemaster’s hand and enjoy an entire underwater world that I’d never seen before. By the end of the dive, I was 10 feet down, hand-feeding huge sharks through a plexiglass hole!

Diving in Panama’s Coiba National Park was a whole new experience. We had extensive 1-on-1 instruction before our first dive, and I got to practice the basic skills in shallow water. When I told our instructor that I feared putting my face in the water, he asked me why. And for the first time ever, I verbalized my fear of water– that it would get in my mask and I’d become disoriented, lose my contacts, become blinded, and no one would be able to help me. As soon as I said it out loud, I thought, “Oh, that’s what it is? I can deal with that!”

When we jumped off the boat after our Discover Scuba training, I was scared for about the first 10 seconds. Then I saw how beautiful the water was and how colorful the fish were. For the first time, I didn’t hold the Divemaster’s hand out of fear. When we got about 40 ft down, we saw four white-tipped reef sharks, which was fantastic. I had more trouble containing my excitement than containing my fear. I knew then that I wanted to get Scuba certified.

Learning the facts about Scuba during our 6-week class at The Dive Shop made all the difference in dealing with my emotional fear response. We spent hours in the 12-foot indoor pool, practicing simple strategies like STOP, THINK, BREATHE & ACT. The basic rationality of, “If you’re breathing, everything is good, and you can figure out the rest later” taught me how to deal with issues logically and control my panic. It made a huge difference for me, both in and out of the water.

Some people get certified in 2-day resort dive courses, but because of my fear of water I really needed the 6-week class. We learned to take our mask off, put it back on and clear it. We learned to throw our regulator hose over our shoulders underwater, and then find it, clear it and breathe normally. We learned to pretend to be out of air, and share air with our buddies. I needed the practice and the challenges of these skills to make me face my fear of water.

Our instructor, Alan Spears, was wonderful. When we were down 60 ft in Fort Lauderdale, doing our Open Water certification dives and executing the skills we’d practiced in the pool, I could hear Alan’s voice in my head, saying, “STOP, THINK, BREATHE & ACT.”  In the pool, Alan was patient and gave lots of encouragement, which was really appreciated. He knew I was scared, but didn’t judge me for it. Having the logical strategies for how to deal with my fear of water helped tremendously.

In Fort Lauderdale, where we got certified by Nick Casper with South Florida Diving Headquarters, we got to dive our first shipwreck, The Copenhagen. I’d never done anything like that before, so seeing the remnants of the ship with a rare red grouper, trumpetfish, cowfish and myriad other species swimming around and fan coral growing on the anchor was pretty incredible. There was a group of advanced divers on our boat that dived a more intact shipwreck 90 ft down. We weren’t experienced enough for that, but it made me think how cool that must be to see a full shipwreck, and it made me want to do even more Scuba training in the future. When Nick isn’t diving, he’s working on his Masters at Nova Southeastern University and is a wealth of information about marine life. Nick took special care to point out several invasive lionfish hiding under rock ledges while we were underwater and later explained how they are eating the native red grouper’s food source causing them to die of starvation.

It’s been an interesting evolution since my first open water snorkeling experience in Hawaii four years ago. The first step I take into open water, I always hear the scared little voice in my head saying, “I don’t want to!” But now, I know that I can. I feel much stronger after getting Scuba certified. I was so scared of open water for so long, but now I think I can use some of the same coping mechanisms I learned in the class for other areas of my life.

So what would I say to others who have a fear of water? Figure out why you’re scared, and then focus on the logic instead of the emotion. Use the logic to combat fear, because there is a whole new world beneath the sea that is waiting for you to explore. Honestly, I don’t think you can have a full appreciation of the ocean without seeing what’s in it up close. There’s a whole incredible ecosystem of coral, fish and other marine creatures so varied in color, shape and size that it’ll blow your mind. Face your fear head-on, and you’ll feel much stronger for doing so!  –Mary Gabbett