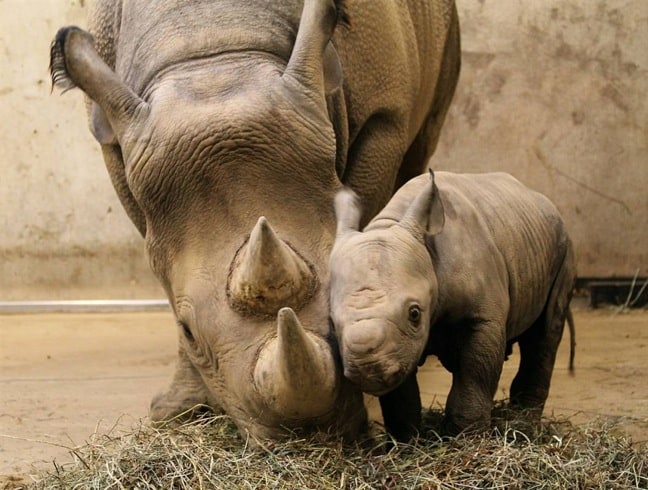 WHERE YOU CAN SEE THEM-  Botswana, Namibia, South Africa, Tanzania, and U.S. zoos including the Lincoln Park and St. Louis Zoos.

“Black rhinoceros” is actually a misnomer, as the animal’s skin has more of a light grayish-brown color. Its African counterpart, the white rhino, was originally so named due to a misinterpretation of the Afrikaans word wyd (or wide), which refers to its square upper lip. The black rhino, on the other hand, has a pointed, hooked lip, and the two species are now often referred to as square-lipped and hooked-lipped rhinos. The black rhino averages 52-70 inches in height at the shoulder, and 9-12 feet in length, with adults typically weighing anywhere from 1800 to over 6000 pounds. The two horns on their skulls are made out of keratin (the same substance in human hair and fingernails), can grow up to more than 50 inches in length, and are used for defense and digging up roots and breaking branches during feeding. In addition to the shape of the lips, you can distinguish black from white rhinos by their smaller size and the position of their heads: Where white rhinos are grazers who prefer grass, black rhinos hold their heads higher to browse on leaves and twigs. Black rhinos have poor eyesight, but an excellent sense of hearing and smell, using their large, rotating ears to detect predators. 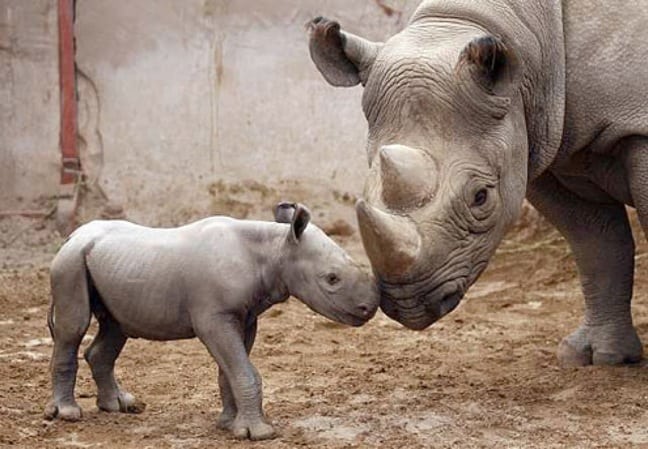 To put it bluntly, because their horns are worth a ridiculous amount of money due primarily to lies purporting their healing and aphrodisiac properties causing a rapidly increasing demand in the traditional Asian medicinal market. With poaching reaching record levels in 2011 (443 killed last year, up from just 13 in 2007), rhino horns have been valued at up to $45,000 a pound on the black market. Although there is not a single scientific report to back up the claims that rhino horn can cure cancer or impotence, these beautiful creatures continue to be killed at an alarming rate: the last Vietnamese rhino was shot and killed in 2009, and in November of 2011 the Western Black Rhinoceros was declared extinct by the International Union for the Conservation of Nature & Natural Resources (IUCN). At current poaching levels, remarkable conservation efforts will be required to save the other Black Rhino subspecies from meeting a similarly tragic fate.

If there’s good news for rhinos, it’s that they have one of the most outspoken and politically active networks within the wildlife conservation community. Organizations such as Save The Rhino, Saving Rhinos, the Black Rhino Foundation, World Wildlife Fund, and the Sheldrick Wildlife Trust are all extremely active in raising awareness and funds for rhino conservation initiatives. On the ground, the war against poaching has become increasingly violent: Rangers have been authorized to shoot poachers on sight, and in the last two months alone police in South Africa have arrested two Vietnamese nationals in illegal possession of rhino horns and seized the assets (over £4 million) of accused poaching kingpin Dawie Groenewald. Though it seems difficult to understand how African nations such as Botswana, South Africa and Tanzania– who depend so heavily on the revenue generated by ecotourism– could let one of the legendary “Big 5” species teeter so close to the brink of extinction, it appears as if they are finally treating the situation with grave severity it merits. Hopefully, with the help of captive breeding programs and private game reserves, it won’t prove too little, too late to save the black rhino. –Bret Love