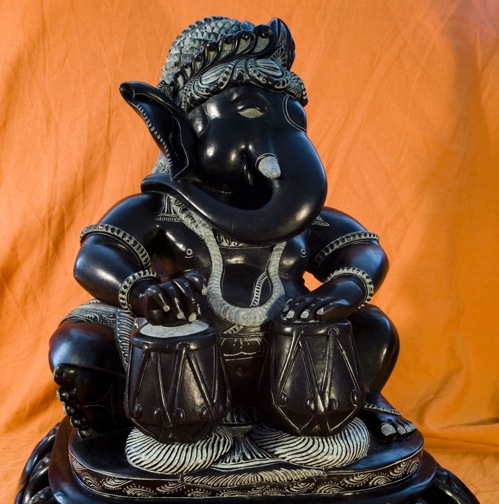 The most important percussion instrument in the North Indian classical musical tradition, the tabla is actually a pair of drums that evolved around 450 years ago from the pakhavaj, a two-headed drum played on its sides with the hands.  Details of how the tabla developed from the pakhavaj are widely debated, but one theory involves an anecdotal incident in which two percussionists brothers were involved in a battle of skills. Out of frustration, one of the brothers threw his pakhavaj to the ground, splitting it in two and thereby creating a new instrument.

Of the tabla’s two units, the higher-toned one, called the “tabla” itself, is cylindrical, made of wood, and tuned by sliding wooden pegs beneath the straps that tighten the head.  The lower-pitched bayan is larger, kettle-shaped, and usually made of brass. The head of the bayan is kept relatively loose, allowing players to alter its pitch by applying pressure with the palm as it is struck with the fingertips.  These components and techniques, along with the gab (the black circle of paste in the center of the heads, which is made from rice powder and iron or magnesium filings), give the tabla its characteristic sounds: a bendable bass tone and a harmonic, ringing high tone.  It all makes up one of the world’s most distinctive, complex percussion instruments.

The tabla has more than 50 different bols– spoken syllables assigned to the various sounds the instrument can produce-and students spend years learning to connect these syllables to form “words” that complete a rhythmic sentence.  In the hands of tabla masters like Ustad Allah Rakha, Zakir Hussain and Badal Roy, who introduced the tabla to Western audiences back in the early ‘70s as a sideman with Miles Davis, these sentences are joined together to form a gorgeously poetic rhythmic language. Check out the video below to hear the amazing sounds the tabla is capable of in the hands of a true master.  –Bret Love