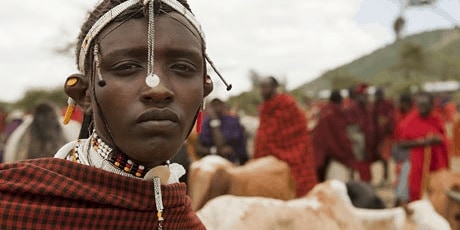 According to Tanzania‘s government, spreading worldwide outrage over reports of Maasai pastoralists being forced from their land so wealthy Middle Easterners can have their own hunting playground is gravely inaccurate. But an online petition to “Stop The Serengeti Sell-Off” at activism site Avaaz.org, which launched the global protest at the request of Maasai tribal leaders, has drawn over 863,000 signatures as of August 21, and pressures are mounting on the East African nation.

For their part, the government insists the accusations that “a big-game hunting corporation could sign a deal which would force up to 48,000 members of Africa’s famous Maasai tribe from their land to make way for wealthy Middle Eastern kings and princes to hunt lions and leopards” is untrue.

What cannot be debated is that the Maasai have been in ugly land disputes with the Tanzanian government for over two decades now. Led by President Jakaya Kikwete, the cash-strapped country started allowing foreign investors– the most infamous of the bunch being the Dubai-tied Ortelo Business Corporation–  to take over huge plots of land so they could trophy hunt big cats.To clear the land, over 40,000 Maasai were forced from the Loliondo region of Tanzania in 2009.

But, according to I’m Black and I Travel publisher Greg Gross, enough people heard about the injustice and spoke out to President Kikwete that he ultimately backed out of the deal. Where the government faltered, according to Gross, is that it did not “engage, involve and consult the Maasai at the front end of this process, rather than just [present] the people with a done deal and an eviction notice. They need to insist that the Maasai be treated as partners. Make sure that they benefit directly, and that their voices are heard and their views respected.”

Sadly, it doesn’t appear that the Tanzanian government learned much of a lesson fro that experience. “For us,” Maasai elder Mzee Orosikos told The Guardian, “our land is everything, but these Arab princes have no respect for the animals or our rights. Many of us would rather die than be forced to move again.”

Avaaz.org representatives echo the Maasai elder’s sentiment. Tanzanian officials continue to insist that nothing sinister is going on, and that the Serengeti is safe. Greg Gross suggests that the best thing for all other concerned parties to do is do your own homework on the subject.

“The first step is to learn as much as possible about what’s going on,” he continues. “U.S. mainstream news media does a lousy job of covering Africa in general, so do the research yourself. Sign the Avaaz petition. Email the Ministry of Natural Resources and Tourism of Tanzania and let them know that actions like this don’t inspire international tourists to come to their country and spend money there.  If enough prospective visitors send that message, it just might cause them to reconsider.”  –DeMarco Williams