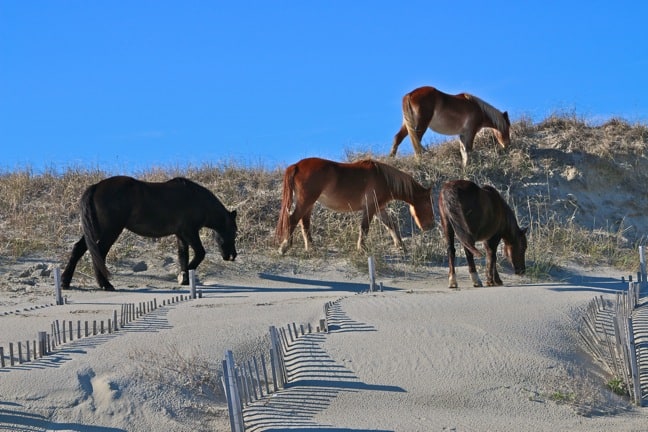 The Controversy Behind the

When we first began planning our visit to the North Carolina coast, I had no idea that there was any controversy about the Outer Banks wild horses. But when I received the following email from a manager of two National Wildlife Refuges in the area after inquiring about visiting, my curiosity was piqued:

“I try to stay far away from the wild horse issue. On a refuge purchased and managed for migratory birds (Currituck), any horses, cows, or other critters that compete with these birds for food are a problem. But the ‘Corolla wild horses’ are a huge political issue right now.  So you’re on your own with that one…” 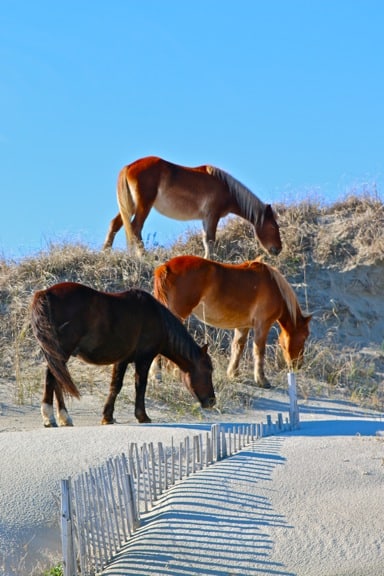 This was the same U.S. Fish & Wildlife Service employee who had suggested in a previous email that I should make time for a chat with one of their biologists in order to gain the FWS perspective on the “wild horses,” and acknowledged that there was a major focus on the issue of horse use on Currituck at the time.

So why was she unwilling to discuss the issue, other than to describe the Outer Banks wild horses as “a problem”? Why would a government agency take a confrontational stance against a species that is the area’s #1 tourist attraction? And why would migratory birds be more important than animals that have reportedly been on these islands for some 500 years now?

There were just a few of the questions raging through my mind as we met up with Andrew Cole, a guide from Corolla’s Wild Horse Adventure Tours, for a 4WD ride into Currituck National Wildlife Refuge. 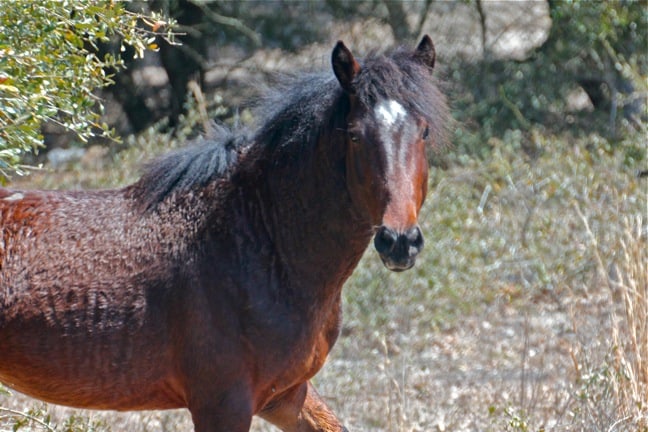 Commonly known as Banker Horses, these small, docile horses can be found living on Currituck Banks, Ocracoke Island, the Rachel Carson Estuarine Sanctuary, and Shackleford Banks. Their distinctive genetic characteristics suggest that they share ancestry with Colonial Spanish Horse breeds such as the Pryor Mountain Mustang and Paso Fino.

They’re believed to have arrived on these barrier islands sometime in the 16th century, but how these feral horses originally came to the Outer Banks is the subject of some debate.

The most common theory is that their ancestors swam ashore from Spanish galleons that wrecked on hidden shoals, which earned the region the nickname “Graveyard of the Americas.” Ships heading back to Spain often navigated a route along the Gulf Stream 20 miles off the Outer Banks’ coast. Eight Spanish shipwrecks have been discovered nearby, sinking close enough to land for the horses to survive. 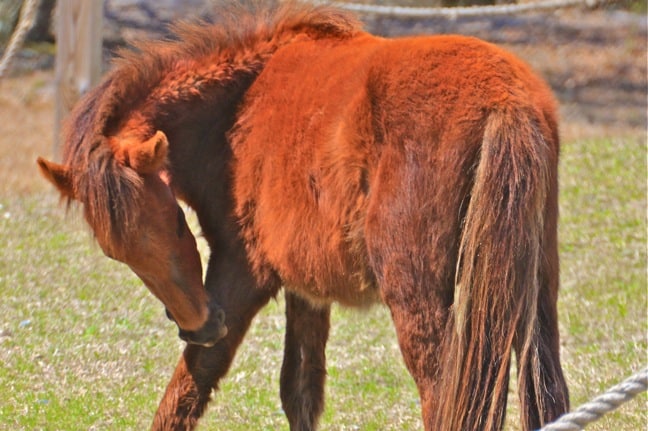 Another story suggests that the breed’s ancestry can be traced back to horses brought to America in 1526 by Spanish explorer Lucas Vásquez de Ayllón, who tried to establish a colony near South Carolina’s Santee River. When a majority of the colonists died, the survivors dispersed, and ultimately fled to Hispaniola, abandoning their horses.

Another theory centers on explorer Sir Richard Grenville, who brought horses to the islands in 1585 and tried to establish a British naval base there. All five of his ships ran aground at what is now Ocracoke, and there’s documented evidence that they carried livestock obtained via trade in Hispaniola. In a letter Grenville sent to a business associate later that year, he claimed that some of his livestock survived on the island. 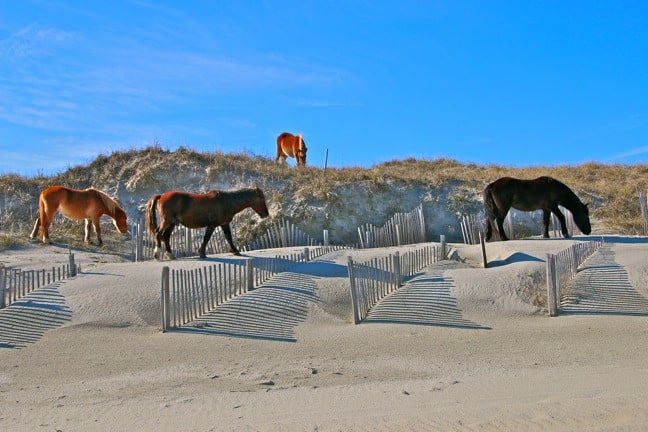 Regardless of how they got there, the ancestors of the original Banker horses have lived on North Carolina’s barrier islands ever since, grazing on grasses and sea oats and digging holes ranging up to four feet deep in order to reach fresh groundwater.

In the early 1900s, the U.S. Lifesaving Service used the horses for beach patrol and rescue; the Coast Guard did the same during World War II. In 1955, Boy Scouts tamed 10 horses from the Ocracoke herd, riding them in parades and using them in programs for spraying mosquitoes in local salt marshes. Even as late as the 1980s, Bankers were used in service at Cape Hatteras National Seashore.

In short, these animals played a significant role in the state’s coastal heritage, with thousands of them once roaming the Outer Banks. Less than 400 survive today. 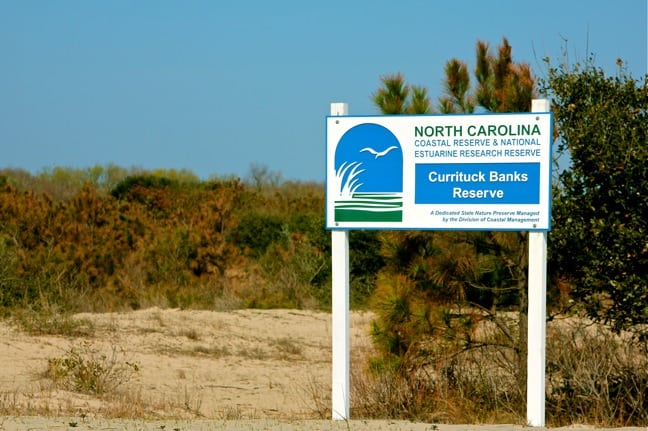 But in the mid-1980s, the encroachment of human development into the Corolla wild horses’ habitat began to create problems. Highway 12 was built, extending from the town of Duck north to the edge of what is now Currituck National Wildlife Refuge. By 1989, 11 Banker horses had been killed by cars, while other horses seemed confused by the fact that they weren’t allowed to enter the Food Lion grocery store.

That same year, the non-profit Corolla Wild Horse Fund was created to help protect the species. The herd was moved to a remote section of the island, fenced into 1800 acres of land– some federally owned, some privately donated– that was declared a feral horse sanctuary. 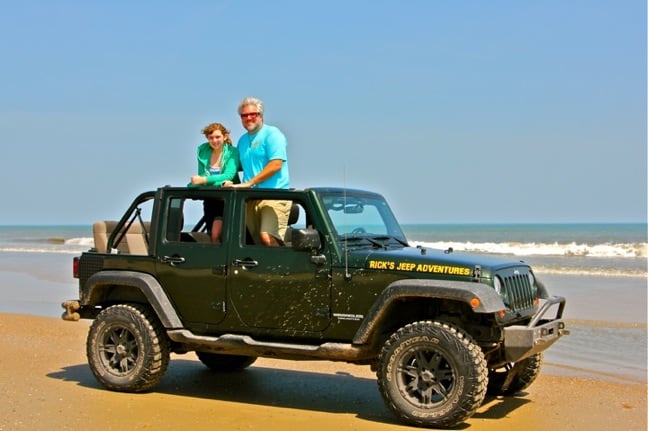 We learned much of this local history from Andrew during our 13-mile drive from the Wild Horse Adventure Tours parking lot in Corolla north to Carova, a tiny unincorporated community located on the North Carolina-Virginia border.

The remote Currituck Banks community is accessible only by boat or 4-wheel drive, which you’ll need to make your way down the expansive beach, past stumps from an ancient (but long-extinct) maritime forest, and over massive sand dunes to reach the unmarked trails that pass for roads through the 4570-acre Currituck National Wildlife Refuge. 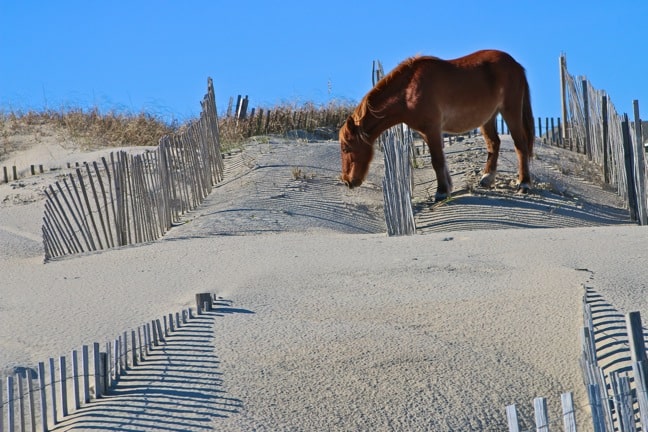 You can explore this area without a guide if you choose, but I wouldn’t recommend it. For one thing, there’s the whole unmarked roads thing: Surrounded by sand and scrub thickets on all sides, it’s easy to get lost if you don’t know the way. Then there are the waist-deep puddles of freshwater that dot the landscape, which we actually saw one 4WD get stuck in.

But most importantly, there’s the other side of the controversy surrounding the Outer Banks Wild Horses: The residents of Carova. Though sparsely populated, with no businesses whatsoever, the tight-knit community is fiercely protective of the horses, and will not tolerate anyone breaking the rule that states visitors must stay at least 50 feet from the horses at all times. 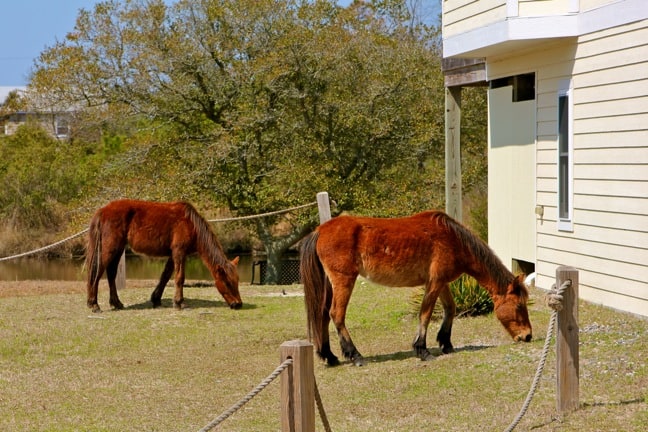 Of the eight horses we spotted during my two visits to Carova, four were seen grazing on the grass in people’s front yards, looking about as domesticated as a friendly neighborhood dog. The community works in alliance with the Corolla Wild Horse Fund and tour companies to ensure that these horses (which are clearly more feral than “wild”) are protected, with a volunteer citizen patrol organized to do just that.

The other four horses? They made their way to the dunes along the beach (right behind the “Please Keep Off Dunes” signs), where they fed on grasses fenced off by the Dune Protection Project. And therein lies the problem: The Fish & Wildlife Service has prioritized protecting the dunes, grasses that prevent erosion, endangered migratory birds that depend on the island’s wetlands, and sea turtles that nest on its shores. They claim that the herd (around 120 animals) is too big and taxes the local ecosystem.

But residents fear the population will grow dangerously inbred if the numbers drop any lower, citing a DNA analysis published in 2012 by Texas A&M equine genetics expert Dr. Gus Cothran, which claimed the herd needed 110 to 130 horses in order to slow genetic erosion. The same report suggests Corolla’s horses may be genetically connected to an ancient Iberian breed that exists nowhere else in the world. 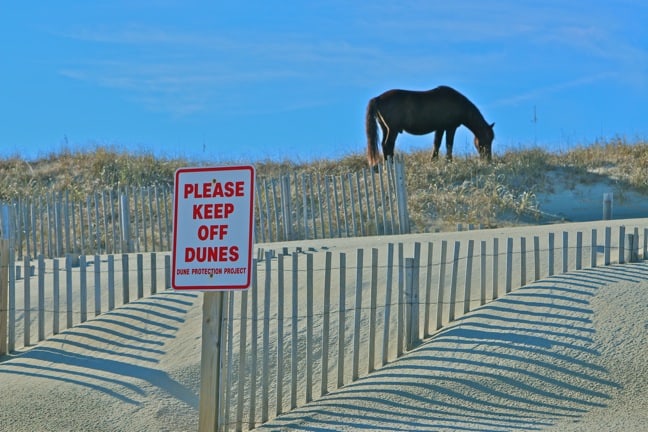 Regardless of which side of this conservation debate your opinion falls on, the Banker horses seem to have won the battle: Last year, the U.S. House of Representatives passed the Corolla Wild Horses Protection Act, which will maintain the herd at around 130 horses, provide cost-effective herd management, and introduce new horses from Cape Lookout National Seashore as needed to preserve genetic viability.

In the eyes of the Fish & Wildlife Service and other conservationists, the horses may never be considered anything more than “a problem.” But if public sentiment is any indication, the ancient bond between horses and humans will ensure that Corolla’s horses continue to roam free for another 500 years.  –by Bret Love; photos by Bret Love & Alexandra Love

This post was brought to you in part by Enterprise Rent-A-Car, which offers electric and hybrid vehicles at neighborhood and airport rental locations across the country. Visit their website for more information.