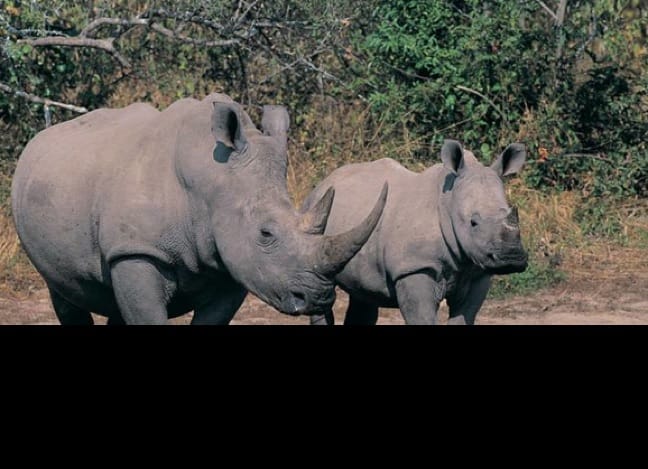 On The Battle to Stop Rhino Poaching in South Africa

There’s a war going on in southern Africa. And though it may not have the human body count of, say, Sudan, this battle is just as bloody. In 2012, rhino poaching in South Africa left more than 650 rhinos illegally slaughtered– approximately one every 16 hours– and more than 100 humans died in the fight to protect them.

Why? Because rhino horns are worth $45,000 a pound, thanks to lies alleging their healing properties that created increasing demand in the Asian medicinal market. There’s not a single scientific report to back up the claims that rhino horn can cure cancer or impotence, yet these majestic creatures continue to be killed at an alarming rate.

So Animal Planet, the network that brought you Whale Wars, decided to do something about it. They assembled a crack team of American special forces operatives, including 30-year-old Navy SEAL sniper Jeff “Biggs,” and sent them to South Africa’s Kruger National Park to work with the Anti-Poaching Units there. The results were filmed for an excellent new docu-series, BATTLEGROUND: Rhino Wars.

Biggs, who joined the military back in 2001, did 7 years of active duty (primarily in Iraq and Afghanistan), and is currently an Active Field Reservist. He recently took some time out of his schedule to talk about why stopping rhino poaching in South Africa is important, why the South African APUs seem to be losing the battle against poachers, and what solutions he sees for the rapidly dwindling species. 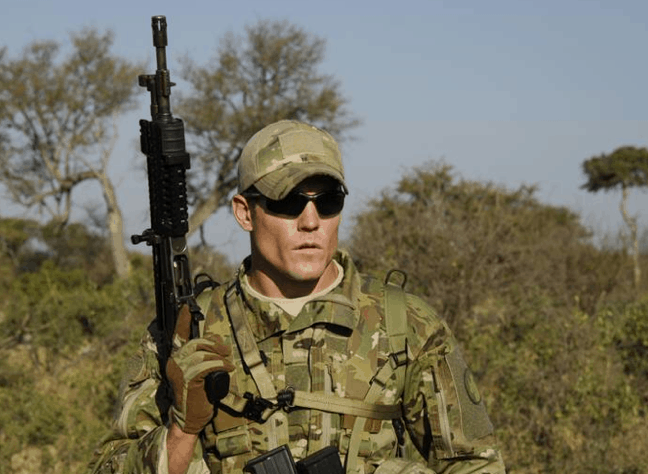 What compelled you to take an assignment protecting rhinos?

Like most people, I was a little uneducated to begin with. I didn’t understand what was happening over there. Once I was given the brief on the decimation of the species, I stood up and said I’d love to fight for the cause. It sounded like a great adventure, and the right thing to do. I felt privileged to be chosen.

What are the biggest obstacles in Kruger National Park to keeping poaching under control?

Money. It is financially irresponsible for them to devote all of their energy and money to one animal, because then they can’t protect the other animals, like lions, elephants and leopards. All of these animals need to be cared for. The game wardens just don’t have the resources necessary to build up their defenses. The solution isn’t that hard. The rhinos are just targets to the poachers, and to harden the target would take better defenses and more rangers. Ultimately, we need to tell the world what’s going on so the demand [for rhino horn] goes down. 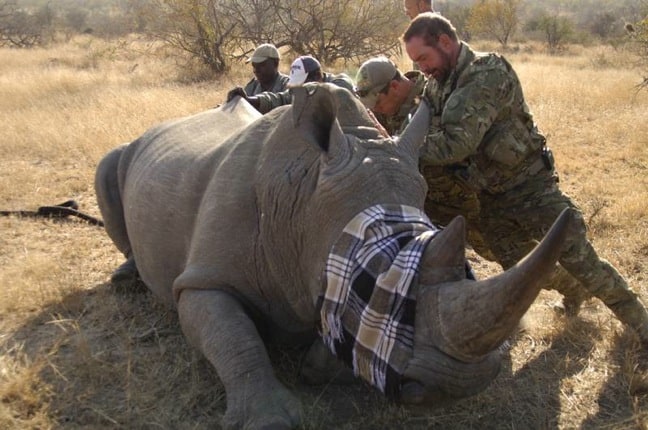 The scene in the first episode where you’re doing the sniper testing and the rifle’s aim is so far off must have been an eye opening experience.

We make due with what we have. But I don’t want people to have the misperception that it’s about us carrying rifles. That is only for our protection. We are ultimately there to protect and save the rhino’s life. We don’t want to pick a fight. Our mindset is to get the mission done without any casualties, period.

That may be your mindset. But, as they say on the show, in 2012 Kruger lost 600 rhinos AND 100 people in the battle to protect the species.

That’s ultimately why we have to be armed. You have to protect yourself and protect your brothers from the evil person behind that gun. We definitely don’t want to be out-played or out-gunned.

What do you think it’s going to take to get people concerned enough about this crisis of wildlife conservation in Africa to take action?

I hope we get some global awareness. We have to educate people and let them know that there’s a problem, because so many people don’t know. But something needs to be done. You can’t watch this show and not understand that there’s a huge problem now. That’s where we’re going to get the world behind us. It’s not a South African problem; it’s a human problem. It’s our responsibility as humans to stop our own species from killing these animals. 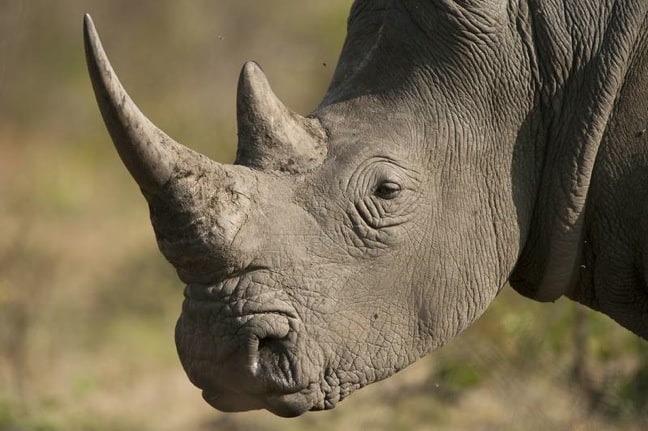 Why do you think the South African government only issues a small fine on convicted poachers, when ecotourism brings so much money into their economy?

The love of money is the root of all evil. I’m not the South African government, and I don’t know what their policies are. I can only tell you what we know about the problem: It’s all greed-driven. It’s all about money. They need to understand that there is no amount of money that will ever bring these animals back.

It seems like corruption of the system itself is part of the problem.

Do you think there’s genuine hope that poaching can be stopped or slowed before all the rhinos are gone?

I think hope [among the APU] was dead, or close to it, when we showed up. People were giving up left and right, saying, “It is not if the rhinos will be gone, but when.” I think that we shocked them back into being hopeful, and they see that if we can get the masses behind us on this and educate people, the rhinos will be OK. But we don’t have a lot of time to act. We need to start now. 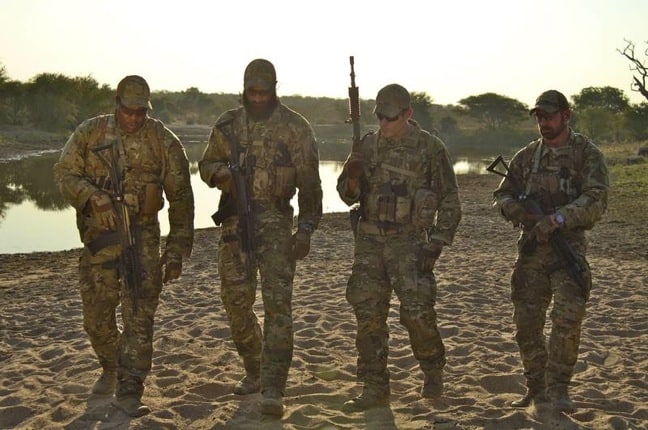 How did your experience in South Africa change you on a personal level?

Doing the job I do, I lack emotion a lot of times. I live two separate lives– a professional life and a personal life. In my personal life I try to be emotional, but in my professional life I’ve always been forced to keep emotion out of it, because it has no place in warfare. But here, emotion was brought into it. It was actually the motivator. I’m a loving, caring person in my personal life, and I’m a precision shooter and outside-the-box thinker in my professional life. I mixed those together, and it was fun for me to be able to do that. It’s the only environment in which I’ve ever been able to do that in my career.

In the scene where you’re watching a baby rhino cry for its dead mother, someone said it made them angry. Seems like it would be difficult to turn off your emotions completely in situations like that.

We’ve always had compassion. You come onto a target that has children, and you’re always compassionate to that. You don’t fight against good; you fight against evil. With the rhino, not only is it not evil, but it’s a baby. It pulls at your heart if you have children. You connect that to your child losing its mother. As a father and a husband, I connected that to losing my wife and seeing my children deal with that, all for nothing. All for greed. 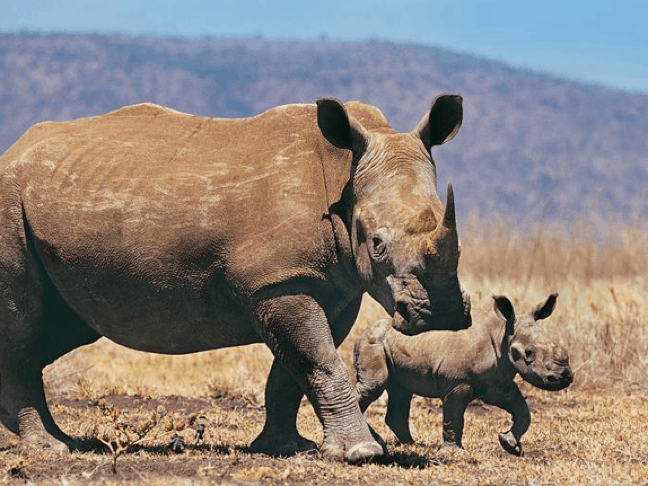 Has there been any discussion of you going back to South Africa in the future and helping to ramp things up over there?

We are hopeful at this point that we will, but nothing is set in stone yet. I’ll go back over, no matter what. I’ve given my word that I’ll help the people that I’ve met over there. In what capacity, I don’t know. Hopefully, it’s with the power of the masses behind us. But, if it’s not, I’ll do everything I can to save them one at a time. You’d probably hear similar things from the rest of the [Rhino Wars] team. They’re all awesome guys. They’re all extremely passionate about everything that they do, professionally and personally. And when you mix them together, you have a very passionate team that gets the job done.  –by Bret Love; photos courtesy Animal Planet

If you enjoyed reading about the battle to stop Rhino Poaching in South Africa, you might also like: