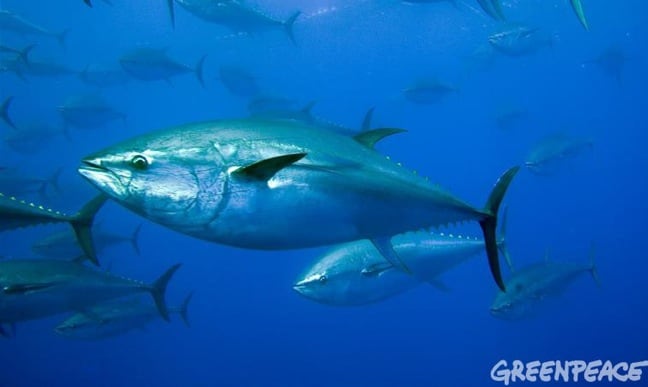 (The following is a guest post by Sofie Couwenbergh, a Belgian language lover who balances a full-time job with a never-ending wanderlust, sharing her experiences on Wonderful Wanderings. You can also follow her on Facebook and Twitter.  If you’re interested in contributing a story to Green Global Travel, please email pitches to Bret Love at info@GreenGlobalTravel.com.)

CURRENT RANGE: Found in the open southern hemisphere waters of the Atlantic, Indian and Pacific oceans.

WHERE CAN YOU SEE THEM: In southern waters from 30° to 60° south, except during spawning season, when the Southern Bluefin Tuna migrates to the tropical seas off the west coast of Australia.

Everybody has seen tuna served as sushi, or in small cans ready to put on a salad or sandwich. But it’s easy to forget that the bony, torpedo-shaped Southern Bluefin Tuna can actually grow to be 2.5 meters (over 8 feet) in length, weigh up to 260 kg (570 pounds) and live 40 years. Swimming at speeds up to 70 km per hour, the fish migrates over large distances and feeds on a wide variety of fish and other sea animals.

The commission has introduced reduced fishing quota and control systems, such as the monitoring of fishing vessels and farming operations. It not only sets up general quotas, but also decides how much each member can catch annually. Unfortunately the price for Southern Bluefin has gone up considerably as a result, making the fish even more valuable. At auction in Tokyo, the fish typically bring in thousands of dollars per kilo.

Farming operations that feed juvenile fish for future sale may also have a positive influence on the Southern Bluefin Tuna population. By holding onto the tuna for a longer period, farmers could give them the opportunity to reproduce. These fish would eventually be sold to the food industry, making fishing in the wild less necessary, as these farms could supply the industry year round.  –Sofie Couwenbergh

ECO NEWS: Killing For Conservation- Can Hunting Save the Black Rhino?