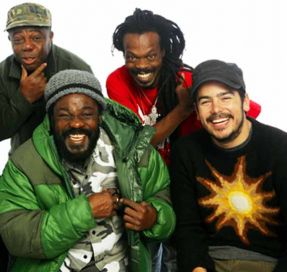 Formed in the late ‘60s in Jamaica and best known as Bob Marley’s legendary backing band, The Wailers remain the world’s most popular reggae act, selling over 250 million albums and performing for over 20 million people around the world. Though Marley died in 1981, the Wailers continued to record and tour, led by bassist/co-founder Aston “Family Man” Barrett and fronted by American-born singer Elan Atias. We caught up with Jamaica’s foremost cultural ambassadors during their recent “Exodus” tour, during which they played the classic 1977 album in its entirety, spreading Marley’s message of peace, love and equality to a new generation of fans.

Why do you think the themes of Exodus continue to resonate with audiences today?

Aston Barrett: The music that we play is for all time and for all ages and races.

Elan Atias: I think the lyrics are even more relevant today because there are more atrocities and problems in the world, from war and hunger to the economy and the environment.

How do you think Bob Marley would feel about you guys embarking on this tour just as America was inaugurating its first African-American President?

EA: It’s very exciting. Barack Obama ran his campaign on the theme of change, and change is always good. The Wailers’ message has remained the same since Fam (an abbreviation of Barrett’s nickname) helped start it in ’67, and he’s been the guy who has held the Wailers family together. But we’re excited about the change, and looking forward to a more positive movement.

When you first started the band, the Civil Rights movement was going full force, and now we’re finally seeing the historic results of those efforts. Is it rewarding for you to see those changes?

AB: Yes, the rastaman vibration is positive, and the prophecy spoke of a man who would bring changes for the new millennium. This is the sort of movement the Wailers have been talking about in our music for many years, and we hope these changes will make things for better for the world. 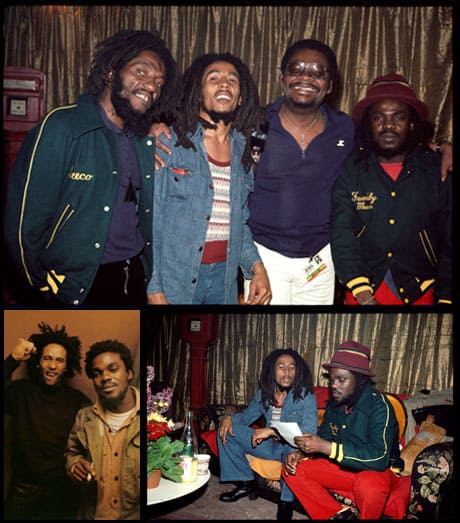 How would you say Jamaica has evolved as a country in the years since you were a boy?

AB: Well, Jamaica is a little island surrounded by the Caribbean Sea, but the people there are very forceful about keeping up with the world around them. They want to take part in what’s happening in the high-tech age– computers, Internet, email…

EA: Jamaica is at the forefront of music, and look what happened last summer with Usain Bolt winning all those medals at the Beijing Olympics! It’s an island of less than 1% of the world’s population, yet they’ve made a huge impact. From the time when Fam and Bob started this band, to all the music that has been inspired by them, it’s been a give-and-take between Jamaica and the rest of the world. They took the sounds of rhythm & blues, jazz and soul and created reggae, ska and rocksteady. Even hip-hop emerged from the sounds of the Jamaican dancehalls, where they’d have DJ sound system parties in the streets and an MC toasting on top of instrumental breaks! If you listen to old school rap, nearly every song had a bassline that sounded like Fam’s.

Why do you think Jamaica has able to maintain its cultural identity in the wake of European influences?

AB: I and I lead the way as the originators, while the rest is the imitators. There are many leaves and branches, but I and I is the root! (Laughs)

If someone were visiting Jamaica for the first time, where would you suggest they go?

AB: Man, there’s so many places! You have to go to the capital, Kingston, and visit the beaches there and all of the shops. And in St. Thomas on the Eastern side, there’s the healing waters of Bath hot springs…

EA: Port Antonio has the Blue Lagoon, you can jump off the cliffs in Negril, there’s Dunn’s River Falls in Ocho Rios, the coffee of the Blue Mountains, the Bob Marley Museum in Kingston, and his burial place at Nine Miles in St. Ann’s Parish… It’s such a beautiful country. With so many members of the band living in Jamaica, we tend to take a lot of these places for granted.

As you guys tour the world playing Exodus, what are the messages you hope people will come to hear?

AB: We want all the people who come to the shows to be able to close their eyes and feel like Bob is on the stage.

EA: I think the message is what has kept this band relevant since 1967. The message is positive, and it brings people together. One love is the message, because everyone is connected.  –Bret Love

The History & Influence of Jamaican Music