Things To Do On Hawaii (a.k.a The Big Island)

With a total area of 4,028 square miles, the island of Hawaii‘s nickname, “The Big Island,” would appear to be something of a misnomer. After all, you can drive around the island’s circumference from the rainy east coast city of Hilo to its sunny west coast counterpart, Kailua-Kona, in less than two hours. But what the Big Island lacks in geographical size it more than makes up for in ecological diversity, boasting 11 different ecosystems that includes the snow-capped summit of the tallest mountain in the world, an arid desert, humid tropical jungles, postcard-worthy beaches, and the world’s most active volcano.

We began our Hawaiian adventure in the tiny hillside town of Holualoa. Though it’s just a short drive from the hustle and bustle of Kailua-Kona, our stay at the quaint Holualoa Inn felt far removed from the trappings of civilization. We actually had to slow our rental car to avoid hitting a wild boar crossing the road, and our pastoral stroll through the B&B’s well-tended tropical gardens and coffee farm was interrupted only by various birds and mongooses in search of their morning meal. Yet its location made Holualoa Inn a perfectly tranquil base from which to explore the nearby coast.

Our trip got off to a rousing start when we embarked upon Captain Zodiac’s Raft, Snorkel & Dolphin Adventure. Leaving from Kona’s Honokohau Marina, the 4-hour trek takes visitors to Kealakekua Bay, the site where Captain Cook landed upon first discovering Hawai’i (and also the site upon which he was later killed during a dispute with the natives).

But the excitement began long before we even got there, with the sightings of a breaching humpback whale with young calf in tow and a massive school of hammerhead sharks swimming in search of sustenance. The bay seemed tame by comparison, with its natural harbor providing a buffer from the Big Island’s pounding surf and allowing amazing opportunities to snorkel with Honu (Hawaiian green sea turtles) and a cornucopia of tropical fish. 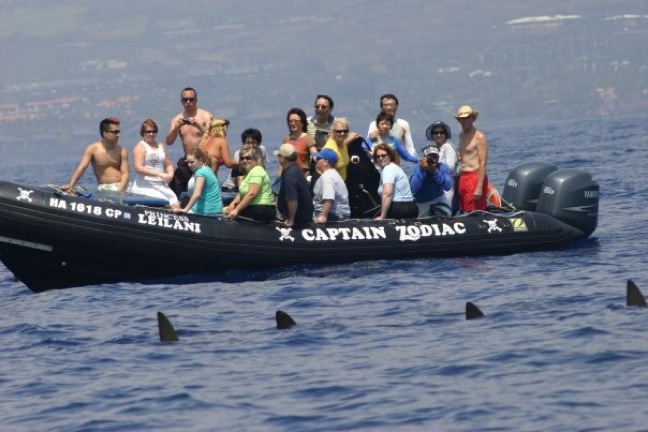 On the way back we stopped at Pu’uhonua o Honaunau National Historical Park, a place of refuge where, until the early 19th century, Hawaiians who broke one of the ancient laws against the gods, defeated warriors and non-combatants alike could come to find safe haven. The 420-acre complex of archaeological sites was once home to several generations of powerful chiefs, and now includes temple platforms, royal fish ponds, coastal village sites and a reconstructed version of the original sacred temple. 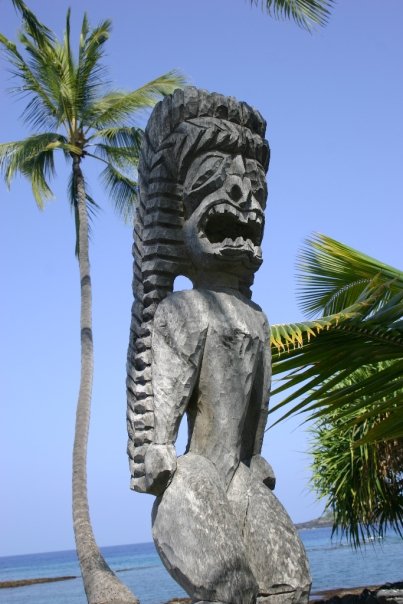 The second leg of our trip found us cutting across the island to visit Hawai’i Volcanoes National Park, which was designated an International Biosphere Reserve in 1980 and a UNESCO World Heritage Site in 1987. The park, which encompasses both the world’s most massive volcano (Mauna Loa) and its most active (Kilauea, which has been erupting continuously since 1983), had changed considerably since my previous visit in 2006. Then, my team visited the Halema’uma’u crater, traditionally considered the sacred home of the volcano goddess Pele, where we left an offering only to be blessed with a rare double rainbow as rain pelted us from the rear and sun warmed us from the front.

But in 2008 a volcanic explosion damaged the overlook on which we’d once stood and covered part of Crater Rim drive, hinting that perhaps Pele had had enough visitors for the time being. Still, we had a great time hiking through the Thurston Lava Tube, learning about the park at the Visitor Center, and browsing the traditional and modern art gallery at the Volcano Art Center. 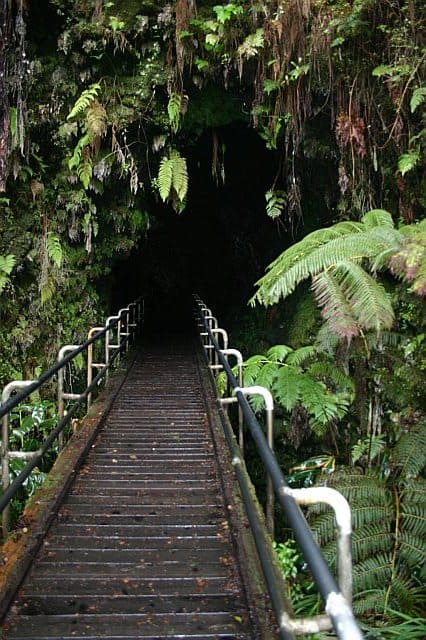 Drenched by a torrential downpour, we eagerly made our way to the lesser-known Kapoho coast, where sun-soaked sanctuary awaited in the form of our residence for the next two days, Shangri-La. An amazing rental property featuring four Bali-style cottages, an outdoor shower and hot tub, and a private lagoon surrounded by palm trees and stocked with thousands of fish, Shangri-La is the sort of heavenly haven that will leave you canceling plans just so you can immerse yourself in its serene splendor for a few more hours. 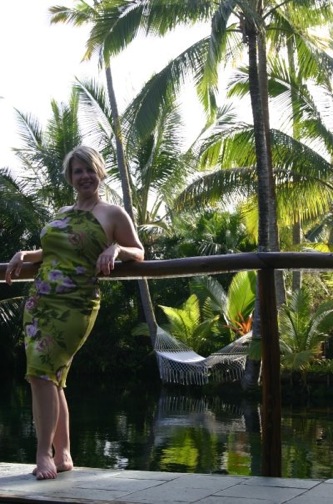 Unfortunately, duty called, so the next morning we set out for a sunrise boat tour with Lava Ocean Adventures. Launching before the sun had crested the horizon– when wind, weather and swell conditions are at their best– we set off down the Kalapana coastline towards a massive plume of billowing smoke. There, radiating intense heat, we found the spot where glowing streams of fiery magma flow from Kilauea all the way to the Pacific, creating a black beach of lava that has gradually expanded the Big Island’s land mass by over 500 acres in the last 25 years.

Returning to Shangri-La after a stomach-churning boat ride that left us delighted to be back on terra firma, we were sad to bid a final farewell to Kapoho, but excited to head north to the island’s Kohala coast to close out our Hawaiian holiday with a visit to the 32-acre Fairmont Orchid.

This 5-star resort offers something for everyone: Luxury lovers can play golf, savor impeccable cuisine and indulge in a relaxing treatment at the Spa Without Walls (all of which are administered in either a tropical garden surrounded by waterfalls or private beach-side tents); adventurous types can paddle an outrigger canoe to watch whales and dolphins on the move or hike through the largest field of petroglyphs in the Pacific; and families can snorkel with Honu in their white sand lagoon or learn about Polynesian history in the Gathering of the Kings cultural show and luau. Naturally, we partook in all of the above.

For our last day on the Big Island, we decided to ascend to Hawaii’s highest peak with the guides from Mauna Kea Summit Adventures. This awe-inspiring 8-hour excursion takes you slowly up the world’s tallest mountain, which measures 33,476 feet above its base on the floor of the Pacific Ocean. After stopping briefly at the visitor center to eat dinner and get acclimated, buses make the bumpy ride up Saddle Road to the snow-crested peak at 13,796 feet.

Here, above 40% of Earth’s atmosphere and 90% of the water vapor, surrounded by many of the world’s leading astronomical observatories, we watched the sunset from above the clouds, wearing parkas and snuggling together for added warmth. Afterwards, we descended to an area near the visitor center, where impeccable views of the night sky made for an exceptional stargazing experience to end our amazing week in Hawaii. 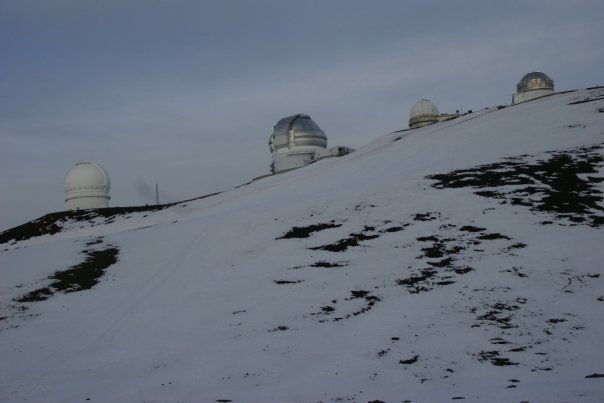 By the end of the week, after driving nearly 500 miles and taking a half-dozen tours (including exploring the island’s massive volcanic craters and lava fields from the air with Blue Hawaiian Helicopters), our minds were swimming with a cornucopia of vivid memories, from the fresh tropical fruits we’d been served for breakfast our first morning at Holualoa Inn to the excellent couples massage we received at the Fairmont Orchid just before leaving for the airport. But even after three visits in the past four years, I’m fairly certain I’ve yet to experience the majority of the wonders Hawaii’s Big Island has to offer.