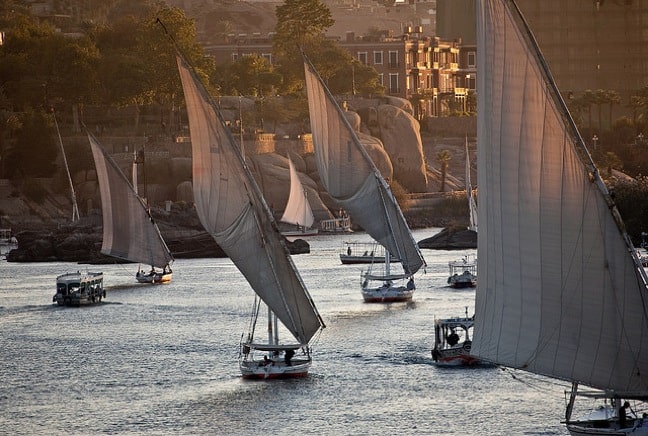 For many years, I was obsessed with all things Egyptian. I’d sit for hours reading the Encyclopaedia Britannica, absorbing page after page on Egypt and its history. Once I hit traveling age, I set off on a solo backpacking trip around a few countries in the Middle East, with Egypt as my last stop. I fell in love with the country and its culture, and after many visits realized  that there’s much more to this wonderful country than pyramids and pharaohs. Here are the top five Egypt eco attractions that I hope will inspire you to visit.

CRUISING THE NILE ON A FELUCCA

The longest river in the world (6,650 km), the Nile is one of the most popular Egypt eco attractions. The most  frugal way to explore this ancient waterway is via felucca, a small, single-mast wooden sailboat able to ferry up to 10 passengers. The duration of your trip is spent on one deck, shaded from the sun by a sail cloth. By night, it doubles as your bed… and everyone else’s.

Cozy it may be, but it’s also a wonderfully leisurely way to observe life unfolding on the increasingly threatened river. Boys jump into the murky waters for their daily wash, birds perch atop the reeds along the banks, and farmers tend their fields in the searing heat of the sun.

You’ll also visit various temples along the way, including the ruins of Kom Ombo (a vast 2nd century temple) and one of the best preserved in the country, the Temple of Edfu (built between 237 and 57 BCE to honor the falcon god, Horus). If spending several days zig-zagging up river against the tide doesn’t appeal, there are short felucca trips available as well.

People always seem shocked to learn that diving in the Red Sea is so good.

This narrow inlet of the Indian Ocean measures 2250 km long, 355 km wide, and is classed as the most northerly tropical sea. Around 40% of it is shallower than 100m, with 25% of that above the 50m mark, making it perfect for diving. The warm, shallow waters mean there is more reef near the surface, which attracts a rich and varied array of marine life. Turtle, manta ray, whale shark, barracuda and shark sightings are common.

Wreck diving is popular here , with the SS Thistlegorm being one of the busier dive sites in peak season. I suggest avoiding the site during this time: When I last dived there, all I could see were bubbles and fins from the mass of divers. Marsa Alam on the southern coast is relatively new on the dive scene, so it still has many areas of unspoiled reef just offshore. If you’re a thrill-seeker, check out one of the few Blue Holes in the world, in Dahab.

Far from the Nile, in the arid Sahara desert, sits Siwa Oasis. Rarely visited by the average tourist, this indigenous Berber community has been an important settlement for desert communities since around 10,000 BC. Now, with private funding and management through Environmental Quality International, Siwa is emerging as a model of sustainable development, and said to be one of the world’s best examples of a responsible ecotourism project..

Here, you can visit the ancient Temple of Amun, where it is said that Alexander the Great consulted the Oracle (a manifestation of a god) to confirm that he was the son of Amun, and therefore the legitimate ruler of Egypt and all the lands he conquered.

The Siwans have their own language, customs and traditions. In fact, at one point same-sex marriage was commonplace there. But they do expect visitors to dress in a way that respects their conservative views and religion.

HAVING LUNCH WITH THE BEDOUIN

The Bedouin, a traditionally nomadic tribe who live in tents in the desert, are primarily found on the Sinai Peninsula and  the outskirts of Cairo. The growth of ecotourism to the area has led to a huge change in their culture, with many of the men leaving herding behind to move into hospitality. Many tribes now run small group tours into the desert, keen to show travelers their unique way of life.

When I visited, the entire family warmly welcomed us into their tent with wide smiles. I could see the matriarch giving me the once-over, as her weathered, wrinkled eyes shone from behind gold sequins hanging from a veil that covered most of her face. I distinctly remember the relief I felt when her scrutiny turned into a belly laugh and she beckoned me over to share tea. Phew!

We sat eating with the family for a few hours, conversing in bad Arabic and hand signals, gradually learning a little more  about each other. No matter which part of Egypt you visit, I highly recommend a trip to see how the Bedouin really live, outside of the Westernized holiday hotspots and cramped markets where they sell their crafts. It’s worth it just to see the genuine joy on their faces when they realise you’ve made the choice to learn more about their way of life.

CHECKING OUT THE FOSSILS AT WHALE VALLEY

Otherwise known as Wadi Al-Hitan, Whale Valley gained UNESCO World Heritage Listing in 2005 for having the most abundant collection of whale fossils in the world. These fossils tell the story of whale evolution and their move from being a land-based animal to a marine animal. The fossils vary from single bones to entire skeletons. Some show that whales once had small hind legs and powerful teeth normally associated with carnivorous land mammals. The shark palaeontologist inside me got silly with excitement at the possibility of seeing these ancient fossils. But when I heard that fossils of a primitive elephant have also been found there, I knew for certain that a return trip to Egypt is a must.  –Linda McCormick

JORDAN: The Secret Trail At Petra