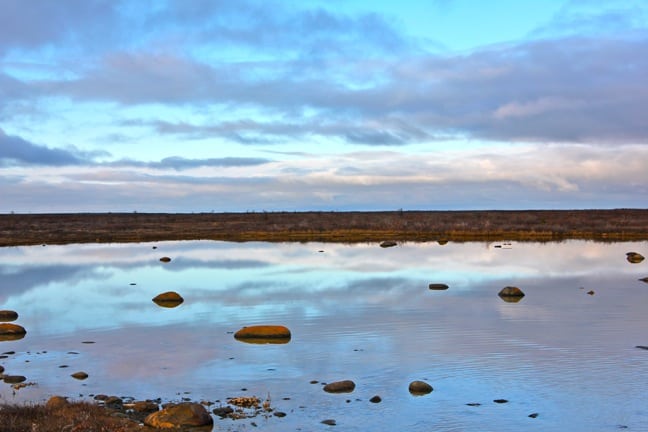 Into The Wilds of the Canadian Arctic

I am vexed. Anxious. Perhaps even worried… which is strange, given the fact that I am not historically prone to such a purposeless emotion.

We’re in the middle of the barren tundra in Churchill, Manitoba, riding in a massive ATV “Polar Rover,” which is built on a fire engine’s chassis with massive wheels like you’d see on a combine. We move at a crawl, bouncing over rocks, crossing shallow lakes fringed with ice, scattering little flocks of Snow Buntings who fly in our wake.

Our Natural Habitat Adventures guide is talking, but I’m so distracted by the vast, expansive terrain– the multi-colored lichens, the cloudy sunset reflected in the tiny lakes that dot the landscape, the boulders on the horizon (which are easily mistaken for polar bears sleeping in the tundra)– that her voice sounds like the teacher in the old Peanuts cartoons. Even Mary, sitting less than 10 feet away from me on the other side of the aisle, feels a million miles away.

It’s taken 36 hours– four flights (8 hours), 2 short layovers (3 hours), 2 flight delays (6 hours) and an overnight stay in Winnipeg to get from our home in Atlanta to here. But even here is not yet “there.” My butt and back are tired from sitting. My mood is sour from waiting. And, for the first time in my travel life, I am truly concerned that perhaps the reality of this trip cannot possibly live up to my Arctic dreams.

I first fell in love with bears in my early twenties. Trying to escape a troubled past, and spurred by stories of Native American rites of passage and South American shamanic traditions, I embarked upon a self-styled coming-of-age “Vision Quest” to discover my innermost self. I dug within my layers of consciousness, twisting and turning them like a metaphysical Rubik’s Cube, curious to figure out, not just who I was, but why, and whether or not my life’s journey had led me to become the man I wanted to be.

One night, in a moment of lightning-bolt hallucinatory clarity, it occurred to me that the bear was my spirit animal. At 6’2” and 250 pounds, I am big and burly, with copious hair that seems to emerge from every possible follicle. I am generally very easygoing, somewhat silly and incredibly playful. Yet I can also be moody, defensive, and fiercely protective of those closest to me.

Within a few years, I had several bear tattoos and was wearing bear totems almost daily. I felt empowered by my connection to the bear, and seeing my brethren in the wild went right to the top of my World Travel Bucket List.

If you want to see polar bears in their natural habitat, there’s no better place than Churchill, which bills itself as “Polar Bear Capital Of The World.” Located on the shores of Hudson Bay in the sub-Arctic region of northern Manitoba, Churchill is prime bear-watching real estate thanks to polar winds that turn the shallow water into ice early in the season. In October and November, hundreds of hungry polar bears make the pilgrimage to these shores to wait… and wait… and wait for enough ice to form that they can go out in search of their favorite delicacy: Ringed seals.

Up until the 1970s, when polar bears wandered into the tiny town of 900 people (more than 50% of aboriginal origin), they were typically shot on sight. But in the mid-‘70s, a now-defunct company called Churchill Wilderness Encounters got the bright idea that tourists might pay a lot of money to see these bears up close, and a booming ecotourism industry, which now attracts several thousand people per year in a short 5-week season, was born.

Over the years, Churchill has proven a trailblazer in responsible ecotourism practices. In 1983, after a man was killed by a bear in the streets, the town created its first “Polar Bear Jail.” Problem bears that enter the town are darted, caged without food for 2-30 days (repeat offenders stay longer each time), then darted again and helicoptered out to the boonies, where they are tagged and set free. There are “Polar Bear Alert” signs all around town warning visitors and residents against venturing on foot into polar bear hotspots near the Churchill River and Hudson Bay. And there is no limit for the town’s budget to take care of “bad” bears.

Outside of town, only 19 tourist vehicles have permits to enter the protected wilderness area. Even those are strictly regulated: They’re not allowed to deviate from the bumpy roads originally created when the military tested rockets in the area; tourists are not allowed to set a single foot on solid ground; and feeding a bear will not only get you removed via helicopter immediately, but you will be handed a bill for the evacuation expenses. Clearly, these people were serious about protecting their bears.

As for us, we’re headed to a prime polar bear-viewing spot I’ve been dreaming about ever since I first learned of its existence back in the late ‘90s: Natural Habitat’s Tundra Lodge. It’s essentially a rolling train– two sleeper cars holding up to 29 passengers total, a lounge car, a dining car, and a car for the 6-person crew– set on the shore of the Hudson Bay, smack dab in the heart of prime polar bear activity. During four days there, you’re virtually guaranteed a bear-lover’s dream come true, with 24-hour a day access to all the sleeping, staring, cuddling and play-fighting polar bears your heart desires.

So why the hell can’t I relax?

It’s not until I sit for a chat with naturalist guide Annie Van Dinther on the way home that I finally understand my anxiety. “Polar bears are humbling,” she said. “And I think deep down inside of all of us, we need to be humbled. We need to be put in our place relative to Mother Nature and our place in the balance of things. Polar bears are a big old reminder that we’re not at the top of the food chain. I think there’s something in us that likes to be reminded of that.”

We’re not even there yet, but already I feel trapped. In the land of the polar bear, we humans are the ones in cages, while the bears roam free (and deservedly so). For the first time in my adult life, I am acutely aware that I’m not in control of my own destiny. And clearly, I am not responding well. After 36 hours of travel, I feel as if I am on the verge of an emotional breakdown, hiding inside a shell that reminds me of a teenage me I’d just as soon forget.

And then finally, just when I feel as if I’m about to snap, the Tundra Lodge comes into view. Set against the expansive Hudson Bay backdrop, its lights glow brightly against the grey-clouded dusk. Almost immediately, I see two massive white forms, like oversized puppy dogs, sitting on their haunches just outside the lodge. I almost weep with relief, and suddenly I know everything will be OK…  –by Bret Love; photos by Bret Love & Mary Gabbett

Living The Dream: We’re Headed to the Canadian Arctic