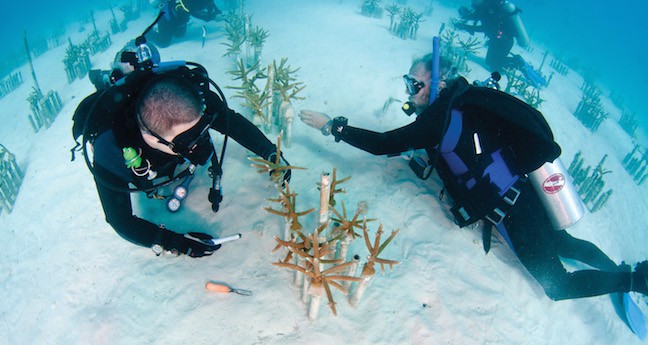 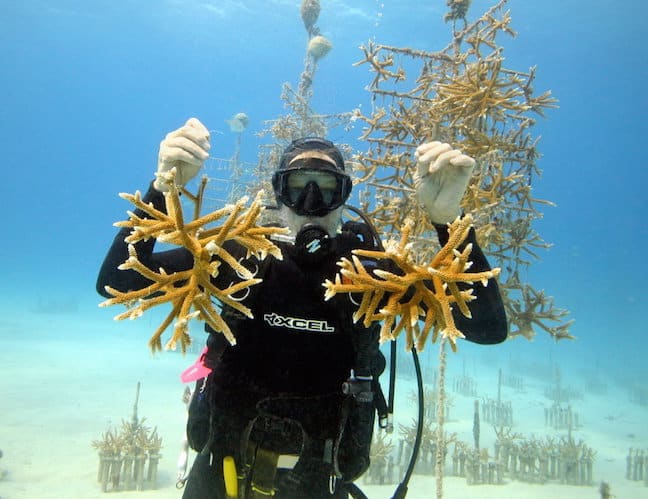 Held on June 8, World Oceans Day is an annual day of celebrating our oceans and taking actions to protect them. Originally proposed at the Earth Summit in Rio de Janeiro in 1992 by Canada, the day was officially recognized by the United Nations in 2008. Now, thousands of conservation organizations around the world observe the day with events such as beach cleanups, educational programs, art contests and sustainable seafood festivals.

To honor this year’s theme of “Healthy Ocean, Healthy Planet,” the Florida Keys-based Coral Restoration Foundation is hosting its first ever Plantapalooza. The event will find eight vessels taking around 70 volunteers to plant 1,000 healthy stag horn corals in seven different reef sites. In the process of promoting the World Oceans Day message of international ocean awareness, they’ll also be helping to save one of the world’s most threatened coral reef systems.

We recently spoke with the CRF’s Education Outreach Coordinator Ashley Hill to learn more about the importance of corals to the marine ecosystem, the importance of healthy oceans to our planet, and what divers, boaters and other travelers can do to make a difference.

You grew up in Colorado. When did you first fall in love with the ocean?

I’ve been fascinated with the ocean since I was 6.

My mom always tells the story about the first time I saw the ocean: Apparently I just stood there, looking at the Pacific Ocean in California, and went completely quiet. She said I had this look on my face like I’d discovered where I was supposed to be in the world.

My curiosities about the ocean developed as I got older, but my sense of wonder remained. I never cease to be amazed by the vastness of it.

Loving the sea is one thing, but dedicating your life to Marine Ecology is another. What was it about this particular Environmental Science that made you so passionate?

I fell in love with Marine Ecology in college. I took a few Marine Science classes, including Marine Ecology and Stream Ecology. Ecology is an especially powerful tool to understand how the environment functions as a whole.

I loved how the tiniest organisms in the water column, such as plankton, affected apex predators through a series of calculated, crucial, but effortless interactions. When I learned how easy it was to disrupt these natural patterns, I wanted to learn as much as I could in order to protect the oceans.

I’ve since gotten the chance to study these systems in several locations, including Washington State, the Turks & Caicos, Hawai’i, and now the Florida Keys.

What were some of the key things you learned about tropical reef systems in Turks & Caicos that influenced your career direction?

When I learned the intimate details of corals in my Tropical Marine Ecology course, I was floored. I was astounded that such a tiny animal had the ability to grow a structure that provided habitat, coastal protection and economic support.

Corals, as individual animals, evolved to have a symbiotic relationship with a single-celled algae found in their tissue. Through this relationship, the corals obtain nutrients they otherwise would not be able to get. In fact, most of their nutrition comes from this relationship. They must rely on their symbiotic algae and tiny tentacles to catch microscopic animals from the water column.

Though they’re small, the skeletons they lay down over time provide the critical habitat many fish and invertebrates require. They also work in cooperation with eel grass beds and mangrove forests to provide nursery and foraging grounds.

What can you tell us about the Coral Restoration Foundation’s history and mission?

The Coral Restoration Foundation is a non-profit conservation organization founded in 2007 and headquartered in Key Largo, Florida. Ken Nedimyer, our Founder & President, worked to gain an understanding of coral propagation and outplanting after a staghorn coral serendipitously began growing in his underwater live rock farm.

Staghorn and elkhorn corals are our bread and butter. They’re quick-growing, branching corals that used to be prolific here in the Florida Keys. In the last 50-60 years, up to 98% of these two species have died in the Caribbean and the Atlantic. This is why we do what we do.

In the Florida Keys there are five offshore coral nurseries that help us understand the best methods for growth. We have access to the Upper and Middle Keys reefs, where we outplant corals under our permits from the Florida Keys National Marine Sanctuary. We can then take our techniques for coral restoration to other coastal communities in hopes that they’ll successfully restore coral reefs in their area.

With your focus on education, what are the key things about marine conservation you hope people will understand after reading this story?

The ocean’s connectedness and power are ineffable. In every educational outreach program I do, I cover simple topics such as “What is a coral?” “Why are corals important?” and “What do coral reefs do for the ocean and for us?” With each of these topics, people can discover how coral reefs support life, both in the water and on land.

What I hope people will understand is that, no matter where you’re located, you have an effect on the ocean and you can do something to help make things better. Learn about your local watershed: Where does your water come from? Where does it go when you’re done using it? Are you using a sewer line or a septic tank? Do you make good use of the reduce/reuse/recycle concept?

In its most basic form, ocean conservation– especially coral restoration– is about changing behaviors.

Can you discuss the negative impacts climate change is having on our oceans, reef systems and the marine life that inhabit them?

As global climate change progresses, these limits have been pushed past the tipping point. As a result, coral reefs experience bleaching, algal overgrowth, invasive species and disease.

I like to say that corals are like toddlers– more resilient than they seem, but still fragile and temperamental. Other factors, such as coastal development and overfishing, affect coral reefs through changes in food webs and pollution.

How does planting new corals help the situation?

The corals we grow in our nursery have been collected over the years from local reef systems with permission from the Florida Keys National Marine Sanctuary.

Occasionally there are healthy colonies of staghorn and elkhorn. Under our permits, we can collect corals that are “winners,” surviving a bleaching event or a disease, and bring them to our nursery. We work with our university partner, Penn State, to genotype our corals. If we know that a particular coral is more resilient to bleaching, we want to find the right reef  and try to get more of those corals on the reef.

We know that we cannot replant every single coral that has died on the Florida Reef Tract. What we can do is collect “winning” corals, propagate them, and put them back on the reef. Reestablishing healthy, reproducing colonies can aid in recovery over a long period of time.

What can you tell me about your new World Oceans Day event, Plantapalooza?

Plantapalooza has been in the works for a few years. Kayla Ripple, our Nursery Program Manager, and Jessica Levy, our Restoration Program Manager, were the biggest proponents. They wanted to host an event on World Oceans Day that would promote our mission alongside the message of international ocean awareness.

We decided on 1,000 corals as a reasonable number we could plant with support from our staff, board members and volunteers. We have 8 vessels going out to 7 reef sites, with about 70 volunteers. Each team has an assigned number of corals, people and a specific reef site. We’re planting as far north as Caryfort Reef and down into the other Upper Keys reefs (such as Molasses Reef and Pickles Reef).

People can get involved by visiting our Education Center between 12 and 3pm on Monday, June 8. We’ll have a few staff members here to answer questions and share our mission. They’ll also be receiving live info from the field about the status of the project.

This year’s World Oceans Day theme is “Healthy Ocean, Healthy Planet.” Can you explain why we need the former if we want to have the latter?

The ocean supports the health of the planet. The ocean is involved in weather patterns, carbon cycling and supporting humanity, to name just a few of its functions. Many of the world’s economies are completely reliant on the ocean, and many coastal and island communities see intrinsic and aesthetic value in the systems of the sea.

What tips can you offer for snorkelers/divers, fishermen, boaters and other travelers for responsible recreation that doesn’t harm our marine ecosystem?

One of my favorite phrases I learned after becoming a diver is “global awareness.” This term transcends diving, and can be guiding in other ways.

I’m more likely to appreciate and completely follow a rule if I have a better understanding of why it exists. If you love to dive, ask the charter captain of any special rules to be aware of. You should always take only pictures, and leave only bubbles!  –by Bret Love; all photos courtesy Ashley Hill & Coral Restoration Project unless otherwise noted

How Mary Conquered Her Fear of Water & Learned To Love Scuba!