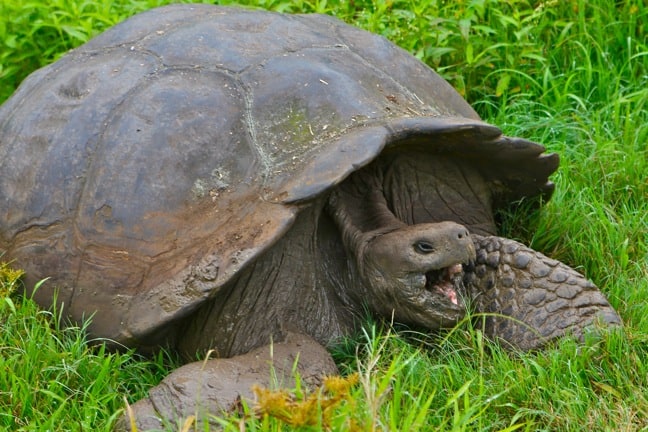 We first met Matt Kareus two years ago, when he was working with Sustainable Travel International and Natural Habitat, and we were newbie bloggers trying to find our feet. He asked us to contribute a few ecotourism posts to the STI blog, we gladly obliged, and we ended up working together on various other projects.

Now, Kareus has assumed the role of Executive Director of the International Galapagos Tour Operators Association, a non-profit coalition of nearly 40 ecotour operators dedicated to “preserving the Galápagos Islands as a unique and priceless world heritage that will provide enjoyment, education, adventure and inspiration to present and future generations of travelers.”

Unlike other similar organizations, the IGTOA is not about increasing profits for its Members. Instead, it focuses on supporting conservation and responsible tourism initiatives in the Galapagos Islands, recognizing that ensuring long-term sustainability is crucial to the future of ecotourism in this incredible unique ecosystem. So we were delighted to chat with Kareus about the preservation of one of our favorite travel destinations.

How did the IGTOA originally come together, and how did you get involved?

IGTOA was founded in 1996 by tour operators concerned about the growth of Galapagos tourism and conservation issues such as population growth and illegal fishing in the islands. They wanted to ensure that tourism remained a positive force, and that tour operators who support well-regulated, low-impact tourism could make themselves heard.

I got involved a few years ago. For 13 years, I worked for a company that was a founding member of IGTOA. When I left, I wanted to get more directly involved with conservation and sustainable tourism, and the Galapagos is a place I’m very passionate about. So when they offered me the job, I jumped at the opportunity.

What does the IGTOA do on behalf of Galapagos conservation, and why is it necessary?

IGTOA is different from other tour operator associations because our mission is exclusively focused on protecting the Galapagos. Rather than pushing for more opportunity and less regulation, like many trade organizations, we support sensible, scientifically based limitations on tourism. We work to make sure people understand the impacts of tourism, so they can make informed decisions and choose to support conservation.

What, in your eyes, makes the Galapagos Islands worth preserving?

The Galapagos is home to hundreds of endemic species that don’t exist anywhere else, which evolved in isolation to inhabit the unique ecosystems of the Galapagos. Marine Iguanas and Giant Tortoises are two well-known examples.

Because humans arrived in the Galapagos relatively recently, in historical terms, our impact there has been small compared to the impact we’ve had on other isolated island groups, such as New Zealand and Hawaii. In the Galapagos, 95% of the endemic species are still around. So it’s a living time capsule– a link to a time before humans conquered and changed every corner of our planet. This gives scientists the opportunity to study natural processes, such as evolution, in ways that are impossible to study elsewhere.

For the rest of us, I think Galapagos conservation is important for the same reasons preserving wilderness and biodiversity are important everywhere; their existence makes our world a better, healthier, more complete place. Ultimately, if we can’t protect something as unique and special as the Galapagos, what hope do we have to protect all the other places that need and deserve our protection?

What ecotourism practices have proven effective in the Galapagos, and what can other destinations learn from those successes?

I think Galapagos conservation has been a good model for ecotourism for the rest of the world.  Only 3% of the islands’ entire landmass is open to human habitation. There are strict limits placed on the number of tourist boats that operate there and where they can go. Real efforts have been made to limit population growth, and there are no high-rise hotels crowding the beaches.

I think it’s fair to say that the Galapagos has thus far escaped many of the worst ravages of mass tourism. Galapagos tourism– and the hundreds of millions of dollars it injects into Ecuador’s economy– provides the means and incentive for the government to protect the islands. As Sir David Attenborough once said, “Without tourism, the Galapagos would no longer exist.”

That said, tourism has been a double-edged sword. It’s driven population growth in the islands, and there’s been huge growth in the number of invasive species there since tourism has taken off. The question is, how can we reduce the negative impacts of tourism while maximizing its benefits? As ecotourism explodes around the world, other destinations are struggling with many of the same problems.

What are some of the biggest challenges facing the future of ecotourism in the Galapagos?

The Charles Darwin Foundation estimates there are over 1,400 invasive species living in the Galapagos. More people visiting and living on the islands means more planes and cargo ships, which are the primary vectors for invasive species.

You only have to look at the impact one invasive species can have to understand why this is such a big problem. For example, there’s an invasive fly species whose larvae feed on nestlings. Once the larvae are in a nest, the birds’ mortality rate is 100%. They feed on Darwin’s finches, including the Mangrove finch, which could become extinct. If it does, it’ll be the first registered extinction of a bird species in the islands.

So the stakes are high, and I think the tourism industry has an obligation to help. IGTOA has donated $50,000 to WildAid, which is spearheading a massive initiative to bring quarantine procedures between the mainland and the Galapagos up to international standards, which will have a huge impact on the problem.

Sea Shepherd and other NGOs have been trying to stop shark finning in the region. Are there any solutions to the poaching problem on the horizon?

Sea Shepherd has worked hard to improve monitoring within the reserve. They’ve helped implement a high tech system for identifying all of the vessels there so authorities can track who’s doing what and figure out who isn’t supposed to be there. The reserve is vast, and resources don’t exist to effectively patrol it by traditional means, so this type of innovation is very important.

Unfortunately, when criminals are apprehended, they often aren’t brought to justice, because the Galapagos is the only Ecuadorian province without its own provincial court. Environmental crime cases are sent to the mainland, where judges claim they don’t have the competence to rule on them, and they’re dismissed.

With IGTOA support, Sea Shepherd is working on a project to improve judicial response to marine crimes. Last year, the national judicial authority of Ecuador announced its decision to install a provincial court in the Galapagos. Environmental prosecutions will no longer take place 600 miles away on the mainland, and cases will be presided over by a judge who is competent to rule on them.

Do you believe responsible tour operators have an obligation to take part in initiatives like the IGTOA that give back to the destinations from which they profit?

What do you think ecotourism in the Galapagos will look like 10-20 years from now?

Right now, there’s huge growth in the land-based tourism segment. For years, the vast majority of Galapagos travelers flew in, spent a week on a boat, and then flew out. Now, at least half of all visitors stay in hotels. This has led to an increase in the number of illegal hotels and unregistered day tour operators.

I think one of the challenges will be to figure out how to regulate the tourism market more effectively. Travelers can do their part by making sure they’re booking tours with registered operators. There are some really eco-sensitive hotels and tour operators, including IGTOA members, who offer land-based tours.

Ultimately, both the tourism industry and the people fortunate enough to visit the Galapagos have a huge role to play in determining how things will look in the coming decades.  –Bret Love

Secrets to Swimming With Galapagos Penguins