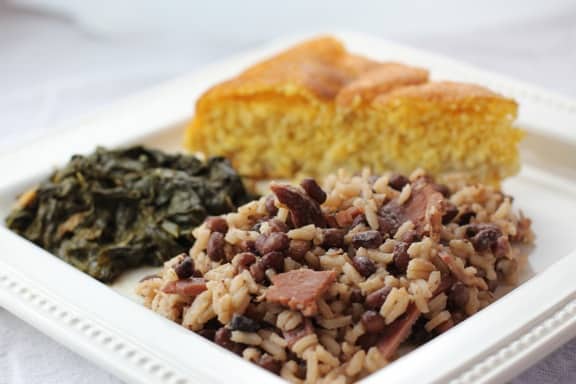 Hoppin’ John is a “soul food” that is a must-have New Years Day Meal in the American South, but its origins can be traced to West Africa and European cultures dating back to the Middle Ages.

Back then, eating beans on New Year’s Day to bring good luck in the coming year was common in France and Spain, while the combination of rice and beans has been popular in Africa for hundreds of years.

Together, they formed a New World tradition now known as Hoppin’ John, which typically consists of rice, black eyed peas and bacon, ham or ham hock.

Widely eaten on New Year’s Day in the Southeastern U.S., the dish is believed to bring a prosperous year full of good luck, with the peas symbolizing coins (one of which is often added to the pot).

Even if don’t believe in such superstitions, the dish is remarkably tasty, and we’ve altered the Joy Of Cooking‘s traditional Hoppin’ John recipe a bit to suit our tastes. Wishing all of our readers a Healthy, Happy & Prosperous New Year!

DIRECTIONS: In a large pan place the peas, ham (or bacon, if you prefer), peppers, celery and spices. • Cover with water and bring to a boil. • Reduce heat to medium-low and cook for 1 1/2 hours. • Stir in the rice, cover and cook until rice is tender, about 20 to 25 minutes. •  Season to taste with salt and pepper. • Sprinkle shredded cheese over top.

TIP: As a time-saver. Mary often takes a short-cut by purchasing canned black-eyed peas which are already cooked (be sure to drain them). Cook the rice separately. Saute the vegetables, spices and ham together. Then combine the black-eyed peas, rice and ham/vegetable rice mixture. Top with cheese.