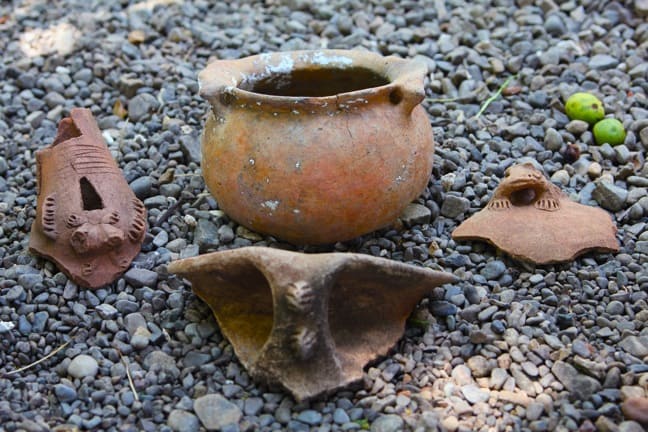 If I could go back in time, knowing of my life what I know now, I’d spend a lot less time studying the music business and a lot more time learning about archaeology and cultural anthropology.

Even as a child, I was always fascinated by history, nature and culture, reading my grandparents’ huge collection of National Geographic magazines and watching PBS shows like Nova and Nature. I was 12 years old when Raiders of the Lost Ark came out, and often fantasized about myself as an intrepid adventurer a la Indiana Jones. Add in a healthy appetite for books by Rudyard Kipling, Robert Louis Stevenson and Jules Verne, and you have a fairly direct road map of the path that led me to become the man I am today.

When I was 15 and my family moved from inner-city Atlanta to 32 acres of rural forest outside the city, I got my first personal taste of archaeological history.  Our land was once part of the Hightower (Etowah) Trail, an ancient road which stretched from Augusta in the east to the mountains of northwest Georgia and served as a major highway for Native Americans. While digging up ground to lay the foundation for our house and barn, we often found Indian arrowheads in impeccable condition– enough to fill several large jars to capacity.

That was the entire extent of my archeological experience until we went to Islas Secas. Tucked away on a chain of 16 jungle-cloaked volcanic islands in the Gulf of Chiriqui (about 30 minutes by boat off Panama‘s Pacific coast), the tiny resort offered eco-attractions ranging from big game fishing and Scuba diving in Coiba National Park to beautiful beaches, world-class cuisine and even spa services.

But one of our favorite Islas Secas adventures was nowhere to be found in their informational brochure.  “You won’t believe it,” their PR rep had told us before our trip. “There are 2000-year-old archaeological relics of Panama history just lying all over the place!”

The notion seemed too extraordinary to be believable, so when we got to the islands it was one of the first things we mentioned to our hosts. The property’s manager, Kieron Baudains, assured us that it was true, and showed us a few of the staff’s more impressive finds (see picture atop this page), which were on display in the restaurant/lounge. Although we had other important items on our immediate agenda, we decided that an amateur archaeological expedition would  be our main activity on our last day in Panama.

As Kieron led us on a trail behind the restaurant and into the woods that ran alongside the employee housing, he explained what we were looking for. Every year around the beginning of May, Islas Secas shuts down for a rainy season that lasts around 5 months. During that time, the islands of the archipelago become flooded as the water runs down the hills to reach the ocean. Over the last 20o0 years or so, this process has eroded stream beds on the property around the resort, loosening the dirt around the remains of an ancient civilization the staff knew almost nothing about.

As we were walking, Kieron went over to the side of the trail, poked around in a ridge of dirt perhaps 4 inches tall, and pulled out what was clearly a shard of ancient pottery (which turned out to be the leg of a large pot). “That’s what you’re looking for,” he said with a smile. And, as we reached the beginning of the stream bed, he left us to our search.

It was slow going at first. The narrow path was covered with leaves at least a foot deep, the morning sun was blinding, and for every tiny shard of pottery you’d find in the bank of the stream bed there seemed to be at least a gazillion rock imposters. After a half-hour I got hot and frustrated and started thinking maybe this archaeology thing wasn’t for me. Fortunately I’m a tenacious bastard, and stubbornly decided to move much further upstream.

There, where the banks were 7 feet tall, we spread out and began finding so many shards that they became commonplace. You didn’t even have to dig: They were sticking out of the dirt amongst layers upon layers of rock, where anyone with a sharp eye could see them (the clay rattle on the left-hand side of the top photo was found by our fishing guide’s 5-year-old daughter). We started finding more impressive pieces– the rim of a pot here, a pot handle or leg there– and began shouting to each other with increasing exuberance. It was like digging for buried treasure, using only our fingers!

When we returned to camp with our haul, I became overwhelmed with conflicted feelings. I can’t lie: There was a part of me that wanted to take a piece of the ancient pottery home as a souvenir of our amazing experience at Islas Secas. After all, they said they’d had people from the Smithsonian Institution out  to do an archaeological survey of the property, and the Smithsonian folks decided it didn’t merit further study. So what would it hurt to take just one piece out of the thousands that must still be there, just waiting to be uncovered?

Ultimately, my conscience got the better of me, and we left all of our finds at Islas Secas to be shared with future guests. We also made a suggestion to the resort’s staff: Make guided 1/2-day archaeological expeditions one of the resort’s offered excursions, and use the profits to build a small museum honoring the island’s place in Panama history. We have no idea whether they’ll take our advice, but if you ever make it to Panama, you should absolutely pay the islands a visit. It was like nothing we’d ever experienced, anywhere else in the world. –Bret Love; photos by Bret Love & Mary Gabbett

PANAMA: Our Own Private Island