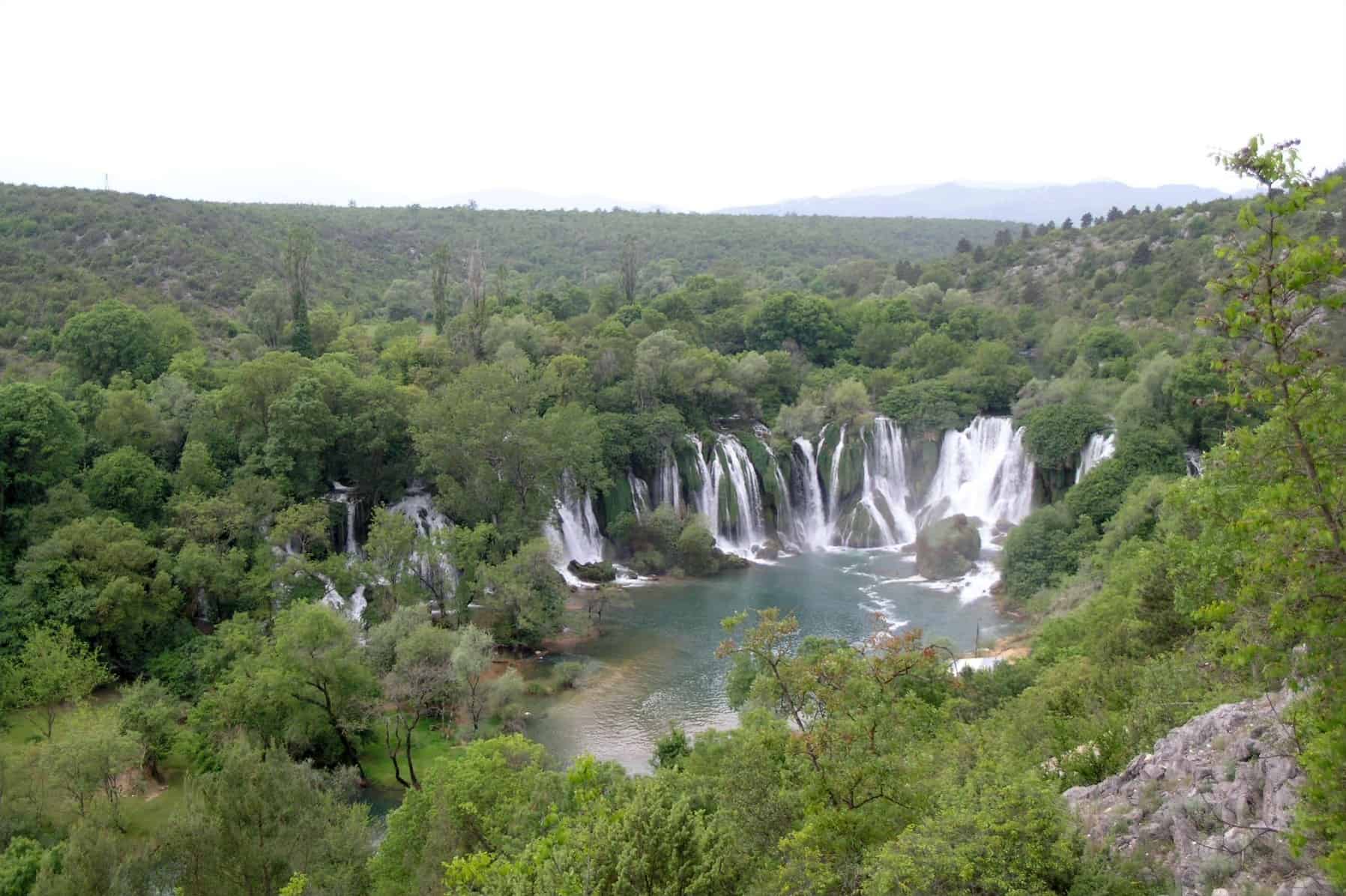 When planning a trip to Europe, Bosnia and Herzegovina might not be the first destination on your itinerary. Many people still relate the country with the war-torn ’90s, and imagine the landscape to be bleak and barren. But in reality, there are numerous attractions in Bosnia and Herzegovina that make it an up-and-coming ecotourism destination, including its incredible history, glorious weather, rich culture, and broad range of ecosystems.

Located 40 km outside the city of Mostar and stemming from the Trebižat River, the Kravice Waterfalls attract thousands of visitors every year. Kravice is shaped a bit like a giant horseshoe, and the water looks as if it is falling from the green trees above, which are dense and thick.

Visitors can swim in the clear waters and enjoy the view from the base of the falls, or go climbing up and behind the falls, exploring the natural basins and curtains of water. For thrill-seekers, there’s a rock in the center that’s around 30 feet high, which you can jump off of into the deeper waters below.

If birds are your thing, there’s no better place in Southeast Europe to see them than Hutovo Blato National Park, which has over 240 migratory bird species and dozens of others that make the marshlands their home.

A meeting point for a number of different rivers, Hutovo Blato is mostly made up of wetlands, but also includes swamp meadow and forests habitats, making it a melting pot of vegetation and wildlife.

The park offers boat tours through the wetlands that are perfect for bird-watchers. There are also a number of walking and cycling paths, allowing visitors to cover as much of the park’s 7,400 hectares as they choose.

The Vrelo Bune (or “Buna Spring”) is the source of the Buna River, and lies just outside the village of Blagaj.

The spring, which runs through a cavern, is one of the largest and most beautiful in Europe, producing extremely clean and cold water. So cold, in fact, that the restaurants built next to the spring actually cool their crates of bottled drinks in the river instead of a fridge!

The Blagaj Tekke (a monastery) was erected next to the water source back in the 17th century, and sits tucked under the enormous vertical cliffs, creating picture-perfect scenery for visitors to enjoy. Vrelo Bune makes for a relaxing day trip from Mostar– perfect for picnics or a lunch at the restaurants around the river.

With over 6 km of passageways, the Vjetrenica Caves are the largest in Bosnia and Herzegovina. They’re located in the Popovo Polje valley, and are named for the cold air which blows from the entrance in the warmer parts of the year (Vjetrenica means “wind hole”).

The cave houses the largest subterranean biodiversity in the world, with over 200 species ranging from cave-dwelling fish and insects to shellfish that only survive in underground systems. Vjetrenica also has ancient cave drawings of bears and leopards estimated to be over 10,000 years old. It’s currently sitting on the UNESCO World Heritage Site list, waiting to be approved for protection.

Tours of the caves are possible from within Bosnia, but you can also find tours departing from Dubrovnik, Croatia.

Sutjeska National Park attracts both nature and history lovers alike. Established in 1962, it’s the oldest national park in Bosnia and Herzegovina. The park features the highest peak in the country, Maglić. It also contains the Perućica Forest Reserve (one of only two primeval forests left in Europe), which hides the 246-foot tall Skakavac waterfall.

The park was the location of the 1943 Battle of the Sutjeska during World War II. A war memorial now stands within the “Valley of the Heroes,” where the Yugoslavian Partisans overpowered the German occupying forces, even though they lost a third of their men.

With over 300 species of birds, and other animals such as bears, wolves, the Balkan Chamois and foxes, Sutjeska National Park is a must-see for any animal lover visiting Bosnia and Herzegovina. –Emma Higgins

ITALY: Singing for the Pope