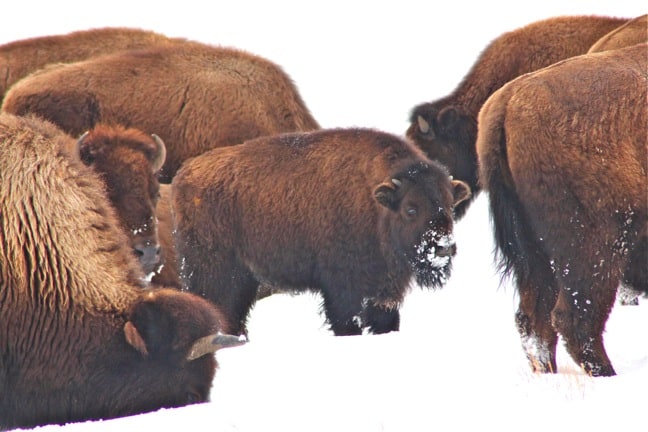 The next day found us venturing deeper into the heart of Yellowstone National Park, venturing south from Mammoth Hot Springs Hotel towards the opposite end of the park. The road is closed to regular traffic from November to mid-April, but Off The Beaten Path hires Alpine snowcoaches outfitted for traveling over snow and ice. Riding in the odd-looking snowcoaches was one of my daughter’s favorite parts of the trip, and I loved the dual sunroof, which allowed us to pop out of the top and snap photos without ever leaving the vehicle.

That feature came in handy almost immediately, as we FINALLY encountered a bison herd close enough to the road to get incredible close-ups. I took at least 50-60 shots in a span of 2-3 minutes, most of them focused on this young bison grazing at the center of the herd. According to our guide, Eve Wills, baby bison are usually born in the late spring, meaning this adorable little fella was probably around 9-10 months old. It was cool how the herd kept a protective circle around him, even though we saw no predators in the area.

It took about 5 seconds after getting out of the snowcoach to understand how Roaring Mountain got its name. Formed of rhyolite, a volcanic rock that contains 70-75% silica, the mountain sits just 1-2 miles above the boiling magma of the Yellowstone Caldera, and is covered in fumaroles (vents or cracks in the ground from which steam escapes). When water– or, in this case, snow– seeps down through the cracks and gets heated up, it essentially boils, and the sound of the escaping steam was like a giant volcanic teapot.

As cool as Roaring Mountain was, I was even more fascinated by the runoff, which took on a vivid green hue due to the presence of Cyanidium caldarium, an acid-loving algae. Basically, the Hydrogen sulfide gas from the magma dissolves in the water, the acidic water rises back up to the surface and dissolves the rhyolite rock, then gradually cools as it flows away from the mountain. Once it does, the algae has a field day, and the stream looks a lot like the Savannah River on St. Patrick’s Day!

There were no cars, but snowmobilers were almost everywhere. I couldn’t get over how much their guided packs looked like snow-bound motorcycle gangs, and I every time I saw them I thought of Sons Of Anarchy.

For the third day in a row it snowed most of the morning, so we were delighted when we reached the Canyon Visitor Education Center, allowing us to grab a bite to eat and warm ourselves by the fire. They also had some great displays of animal furs and skins, and a great video on the wildlife of Yellowstone. This photo gives you a pretty good idea of just how much snow we were dealing with.

The attraction known as the Grand Canyon of the Yellowstone had an entirely different look during our Winter Wonders Tour than what we’d seen in postcards. For one thing, the upper falls looked almost completely frozen, with crazy shapes formed in the ice from the waterfall’s mist. The ice around the falls also took on the blue-green hue of glacial ice, which complemented the colors of the snow-capped evergreens perfectly.

From this angle, you get a better idea of the canyon’s scope, which measures approximately 24 miles long, between 800 feet (244m) and 1,200 feet (366m) deep and between one quarter of a mile (.45 km) and three quarters of a mile (1.2 km) wide. You can also see more of the vivid colors for which it is known, which are  a result of hydrothermal alteration of the iron compounds in the canyon’s rhyolite rock. In short, the canyon is gradually rusting.

We don’t normally post a lot of snapshots in our GGT photo galleries, but this one was too cute not to share. Several times during our trip, while I was shooting photos, my daughter would amuse herself by making little baby snowmen (I believe she named them all “Snowy”). I was so busy working that I didn’t notice this one until after I took the photo, but in retrospect I love that she chose to pose beside her new friend.

I never get tired of photos of waterfalls, and I like this one in particular because of the vignette framing provided by the evergreens, as well as the blue-green tinge of the ice created by the falls’ frozen mist.

In our most exciting wildlife sighting of the day, our other snowcoach driver radioed back that they’d spotted a red fox walking in the vast open plains of Hayden Valley. We got there just in time to watch the bushy-tailed beauty running and pouncing in the snow in a hunt for rodents. It wasn’t our first time seeing a fox in the wild– Alex and I saw one in the north Georgia mountains about 5 years ago– but the pristine setting, the striking sight of the red coat against the white backdrop, and that incredibly fluffy tail made seeing him a highlight of the trip.

We were equally excited when, for the very first time since we arrived in Yellowstone, the sun emerged fully to illuminate the peaks of the mountains in the distance. Living in Atlanta, we tend to take the sun for granted in winter (and occasionally curse it in the heat of summer), but 3 days of freezing cold made us appreciate its warmth on our skin. It’s amazing how rejuvenating a little Vitamin D can be.

Ecotourism operator Off The Beaten Path uses the trumpeter swan in its company logo, so it seemed somehow appropriate that we spotted a whole flock of them swimming in the river as we made our way to the hotel for the second half of our Yellowstone National Park adventure.

We were too pooped to ponder by the time we finally arrived at the Old Faithful Snow Lodge, a relatively new resort  opened in 1999. But the beautiful lobby was a warm, welcome sight, with its exposed wooden beams, historical decorative accents and popular open hearth fireplace. It also proved a great location from which to explore Yellowstone’s famous Geyser Basin…  –by Bret Love; photos by Bret & Alexandra Love