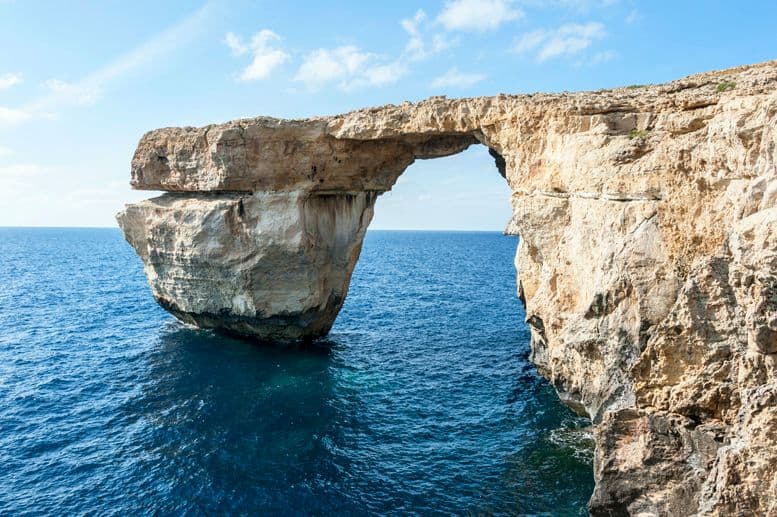 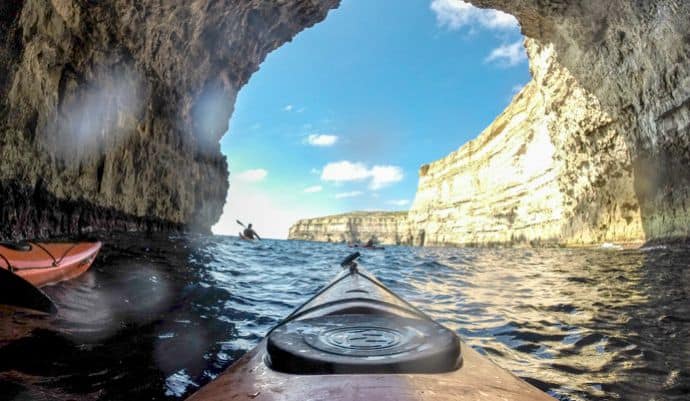 Adventure lovers, brace yourselves. I’m going to tell you about Gozo Island, a pristine paradise in the Mediterranean where you can hike, bike, climb, dive and abseil, all within 26 square miles.

You can wake up in the morning and go for a Scuba dive, exploring some of the most unusual rock formations in the Mediterranean. After lunch you can go for a bike ride, and finish the day off with a couple of rock-climbing pitches at sunset.

The nature is unspoiled, the locals are friendly and, unless you visit in the height of summer, there are very few visitors around. Sounds like a dream, right?

AN INTRO TO GOZO ISLAND

Gozo Island is Malta’s little sister, situated just north of the main island. Malta is on the brink of succumbing to urbanization. Approximately 400,000 people live in just 122 square miles, making it the most densely inhabited country in the EU.

The whole western coast of Malta is like one big sprawling mega-city, with congested roads and public transport insufficient to cater to the needs of a rapidly growing population and an ever-increasing number of tourists.

By contrast, Gozo Island remains wonderfully tranquil. It totals about 30,000 inhabitants, but full-time residents are probably fewer (many Gozitans retain residence on the island even though they actually live in Malta).

On Gozo, the majority of the population lives in the capital of Victoria/Rabat, and even that feels like a sleepy country village. Outside Victoria, the island sort of feels like a place where time has stopped. Elderly ladies make lace by hand while sitting on their doorsteps. Children chase cats and footballs in the sun-baked streets.

Everywhere you go, you can see the coastline. If you walk to the top of Citadella, the ancient fortress on the highest point of Victoria/Rabat, you’ll be able to glimpse the sea in all four directions. Yes, Gozo Island really is that small.

Gozo Island has very few sandy beaches, with the red beach of Ramla Bay a notable exception. But  part of Gozo’s beauty is its rocky coastline, which offers adventurous travelers the opportunity to explore cliffs, coves and secret beaches.

Mgarr Ix Xini is one of the most spectacular places on the island– a narrow, long inlet (almost a mini-fjord) with clear emerald-colored sea surrounded by cliffs and a lone restaurant on the beach. Angelina Jolie famously fell in love with the location during a visit to Malta, and chose it as a location for her film By The Sea.

For us, the real attraction was not the inlet itself, but the surrounding rocks. Even getting to the climbing walls of Mgarr Ix Xini was an adventure. From the road, we descended on a trail that was a really little more than a goat track down into a river canyon that was completely overgrown with plants and shrubs.

Our guide spent over two years clearing the walls of vegetation with a pair of gardening shears before being able to open the climbing routes. We had to squeeze through a hole in the rock just to get to the section of the wall where the climbs were easy enough for us to do.

When we first started climbing, we quickly realized that our guide’s effort was worth it. The rock was a pleasure to climb– thick, compact limestone, still relatively untouched, making it rough to the touch and easy to grip.

Rock climbers will know what I mean, but for newbies here’s a quick explanation: Limestone is a great type of rock to climb, as it’s full of holes, notches and “handles” to grip. Bigger grips mean easier climbs because the smaller the grips get, the harder the climb becomes. If the rock is climbed a lot, people’s hands make the rock gradually smoother and oilier until it gets slippery. Several popular routes in the Alps are so oily that climbing them is not fun at all.

To be honest, I’m far from being a good climber. I’ve climbed occasionally for about three years now, but, having started at the age of 29, I’ll never become proficient. But in my mind, there’s nothing that makes me feel closer to nature. Up there, only the rock and I exist.

I search for grips with my fingers and clutch them tightly until I manage to find the right angle to push with my legs, heading upwards. I learn to trust nature. On the rock wall, there’s no time for everyday worries. Only that moment exists. My mind becomes laser-focused on the next step that takes me one meter closer to the top. When I get to the top, I feel like I’m on top of the world.

We spent the whole morning climbing and barely saw a half-dozen people, so we thought Gozo was an undiscovered secret. Sadly, the reality is different, which we learned that afternoon when we went kayaking at Dwejra.

KAYAKING THE COAST OF DWEJRA

Also known as the Azure Window, this rock arch was chosen as the setting for the marriage between Daenerys Targaryen and Khal Drogo in Game of Thrones‘ first season. The rocky coast is whipped by the wind year-round, and the soft sandstone is broken into coves, sea caves and rock formations.

We started our kayaking trip in the so-called “inland sea,” a lagoon on the other side of a cliff. We then kayaked through a cave, heading towards the open sea, with a plan of paddling slowly along the coast and visiting caves until we got close to the Azure Window.

As soon as we got out of the lagoon and into the cave, controlling the kayak became much harder. Part of it was due to the waves, which were much stronger away from the lagoon. But the situation was made more difficult by the dozens of sightseeing boats zipping in and out of caves, taking tourists below the fabled arch.

Don’t get me wrong: Kayaking along the coast of Dwejra, exploring small caves where the sea sounded like an ancient creature and traveling through the great blue while gently rocked by the motion of waves was a great feeling. Gozo’s coastal environment was as beautiful as it is fragile.

When we approached the Azure Window, our guide warned us not to go right under it. However, waves pushed me along, and when I got closer to it than intended I immediately understood the need for caution. A MASSIVE crack ran through the middle of the arch: The whole thing could have collapsed on me at any minute! Needless to say, I paddled away as fast as I could.

Once we got back onto land, we noticed that near the top of the arch there was a sign saying, “Danger – Do Not Cross.” But tourists completely ignored the warning and headed right to the top, above the crack that I saw very clearly from below. Our guide explained that the Azure Window is gradually being eroded by the wind and sea, year after year.

We saw pictures showing how the arch had gotten thinner and thinner over the last twenty years. One day, Dwejra will ultimately be known as the Azure Pinnacle. That day could be a few years from now, or perhaps only a few months. But it could literally collapse at any time and, if the recklessness of these tourists continues, there may be some victims when that happens.

The majority of Malta’s economy is based on cinema and tourism. With the variety of landscapes found on Malta and Gozo, these islands have doubled in film and TV shows as Jerusalem, Egypt and India over the last few decades, not to mention a variety of fictional landscapes.

As far as tourism, a large percentage of visitors to Malta are day-trippers from cruise ships, mostly visiting the capital of Valletta and perhaps Mdina or other locations on the main island. Only a trickle of visitors ever make it across to Gozo, meaning that the smaller island misses out on a lot of tourism-driven revenue.

But the number of visitors to Gozo Island are gradually increasing year after year. For this reason, the Maltese government has started to plan construction of a cruise terminal on Gozo, in addition to the one on Malta’s Great Harbour. The site has already been identified, not far from the current ferry terminal linking Gozo to Malta.

The plan is controversial, to say the least. On one hand, the project is relatively eco-friendly, utilizing the site of a former quarry, which will need less construction compared to a cruise terminal built from scratch. On the other hand, building a cruise terminal on Gozo Island would not only disrupt the slow, local lifestyle of the island, but also wreak havoc on the seabed, which houses a variety of sea life and some of Europe’s largest underwater meadows of poseidonia algae.

The debate is ongoing. Unemployment on Gozo is high. The cruise terminal would bring a much-needed boost to the economy, and stop the exodus of young Gozitans to Malta and beyond.

But surely giving a natural paradise like Gozo Island away to the destructive world of mass tourism cannot be the answer. The environmental implications would be severe: It’s difficult to imagine that the ecotourism wonderland we have come to love might end up becoming a thing of the past, buried under tacky souvenir shops and pavement cafes. But who knows what the future will bring?  –by Margherita Ragg; photos by Nick Burns

MALTA: Celebrating the Festival of Mnarja

Top 10 Places To Go Before They Disappear