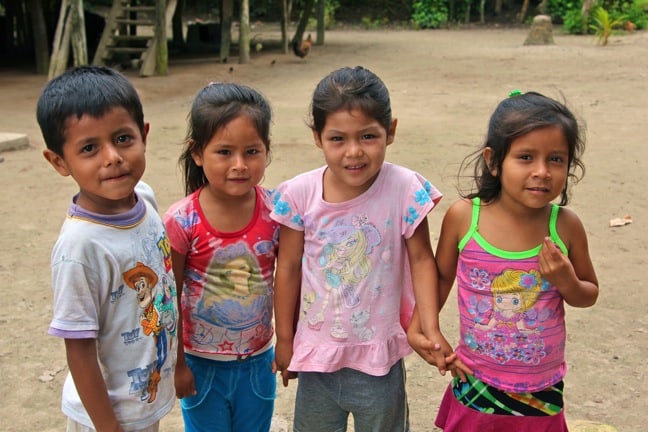 When people think about visiting the Amazon Rainforest, their first consideration tends to be nature and wildlife.  After all, with 2,700,000 square miles (representing more than half of the world’s remaining rainforests), the Amazon offers a remarkable amount of biodiversity. The region is home to more than  40,000 plant species and over 2,200 types of fish, 427 mammals, 428 amphibians, 378 reptiles, and approximately one-fifth of all the bird species on the planet.

So, when we were initially invited to visit the Peruvian Amazon with ecotourism operators International Expeditions last year, the people of Peru were honestly the last thing on our minds.

But, as amazing as our wildlife encounters deep in the Amazon’s tributaries were (especially meeting the rare baby manatee), one year later the memories that stick out the most in our minds involve our time with the region’s Ribereños, or river people. What follows are some of our favorite photos of the Faces of Peru, including shots taken in the streets of Lima and the remote villages of Nueva York and San José… 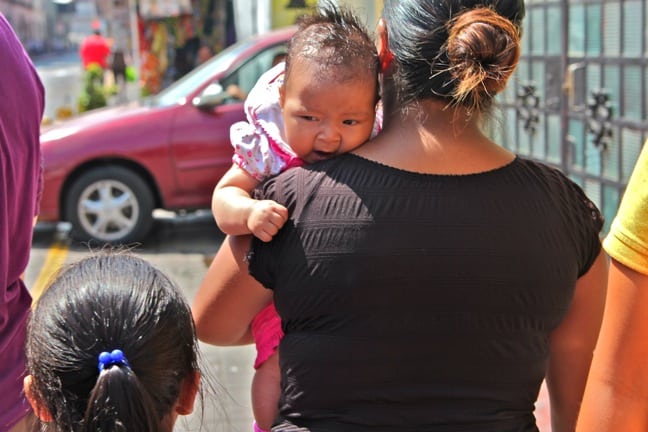 Our trip began with a tour of some of the more historical sites in Lima.  We saw this beautiful baby and her family walking in front of us, and were endlessly amused by her dramatically curious facial expressions. 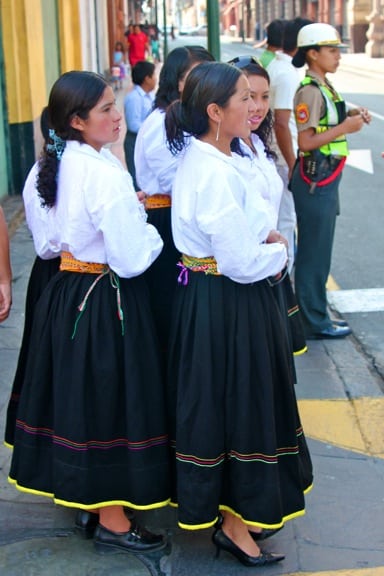 As much as we love portraiture, we also enjoy slice-of-life photographs that portray people in their natural state, completely oblivious to the presence of a camera. These teens were part of an indigenous dance group about to put on a performance in Lima. They buzzed with nervous, excited energy as they made their way towards the stage. 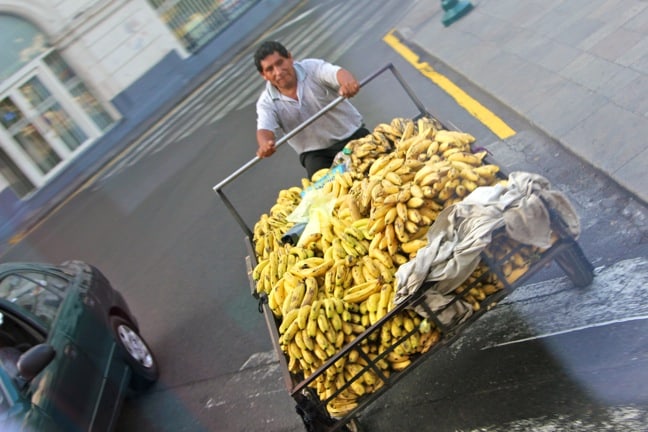 As we made our way by bus to the airport for our flight to Iquitos, we passed this man taking his bananas to market by bicycle. The glare from the window is a distraction, but this is one of our favorite Lima shots nonetheless. 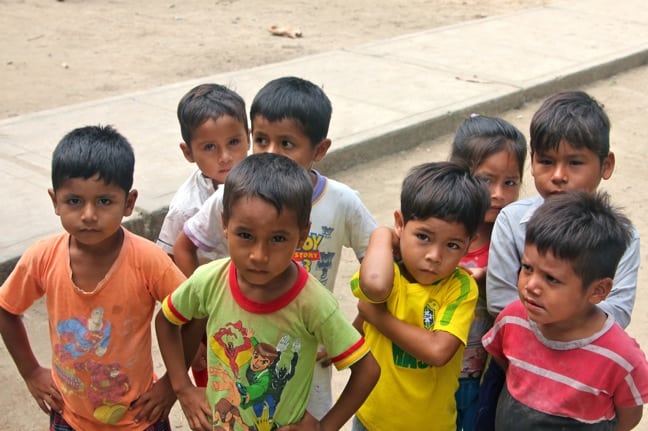 The young Ribereños boys of Nueva York were initially a little standoffish, clearly watching us carefully to see how they should react to our presence. Since International Expeditions works with many different villages and spreads out their visits so each gets a chance to benefit from ecotourism revenue, some of these kids had never seen tourists before. 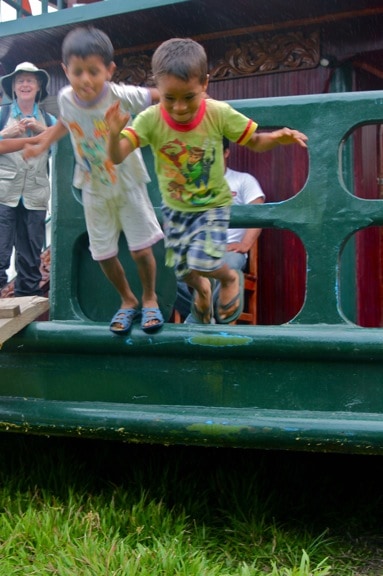 But once they got comfortable with our presence, the kids started going bonkers, particularly these two boys, who took immense joy from jumping off the front of our boat and somersaulting into the grass of the riverbank. We quickly fell in love with these children of Peru. 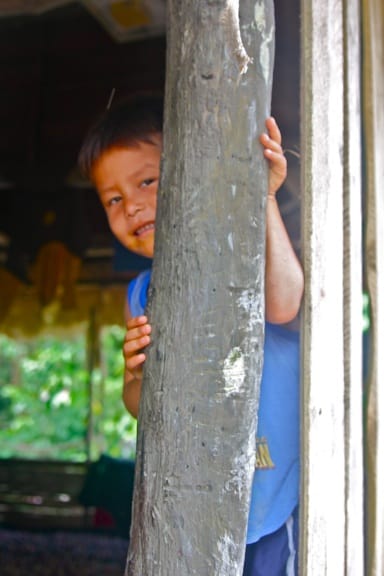 A few of the kids never quite seemed to get over their initial hesitation. Though two of his older sisters posed sweetly when I asked if I could take their photo (and we always asked permission), this shy, smiley guy played peek-a-boo from behind the post of his family’s front porch. 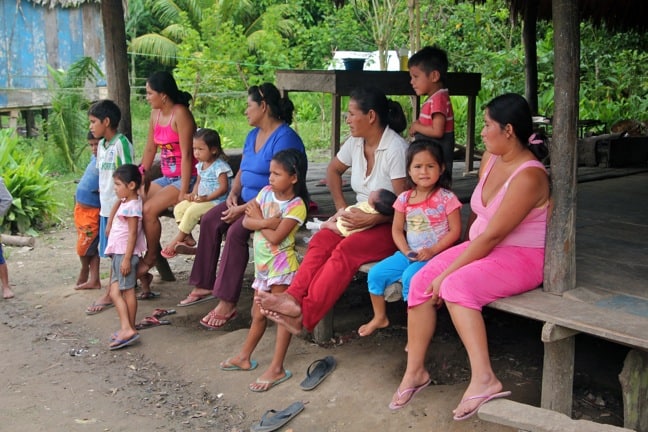 When we arrived, most of the men of the village were gone, presumably out hunting or fishing for food. The few who were there seemed to stand around and watch the woman work– washing clothes in the river, sweeping their houses, roasting manioc (a.k.a. yucca), and tending to the kids. Seemed to us as if the men got the sweet end of that deal… 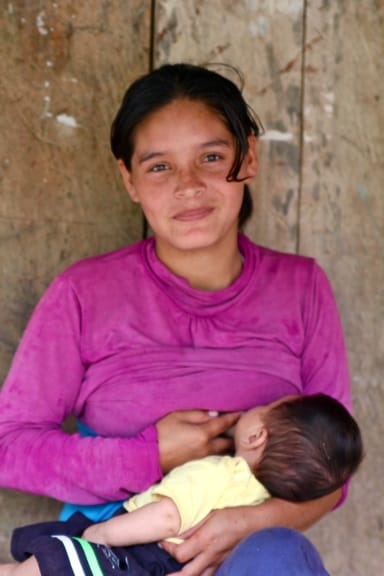 Our guides explained that women in the Peruvian Amazon start having kids at an early age, tend to have quite a few, and have significantly shorter life spans than their husbands. This young, nursing mother was so strikingly beautiful, we were delighted when she graciously agreed to pose for a photo. 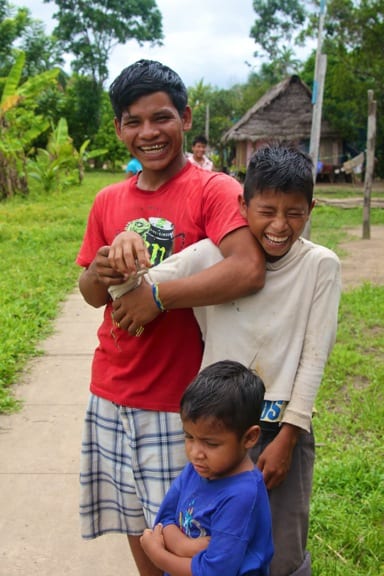 For some reason these two teenage boys thought it was HILARIOUS when Mary asked if she could take their photo. We’re not sure if it’s because she was a woman, or because she had blonde hair, which none of the kids in the village seemed to have ever seen before. As we walked through Nueva York, Mary attracted quite the entourage of admirers! 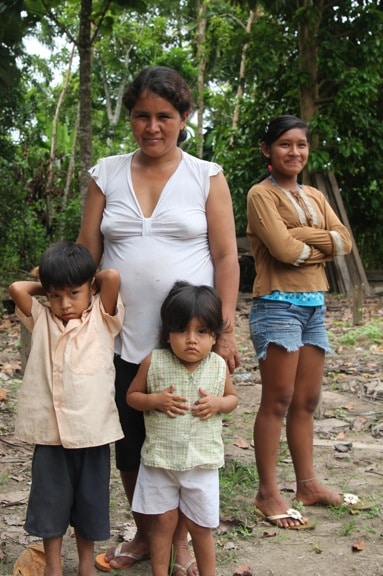 One of my favorite faces of Peru, this young teen was one of only two girls we saw in the entire village who adorned themselves with jewelry. We just loved her enigmatic smile, her proud posture, and the intriguing body language that seemed to separate her from the rest of her family. 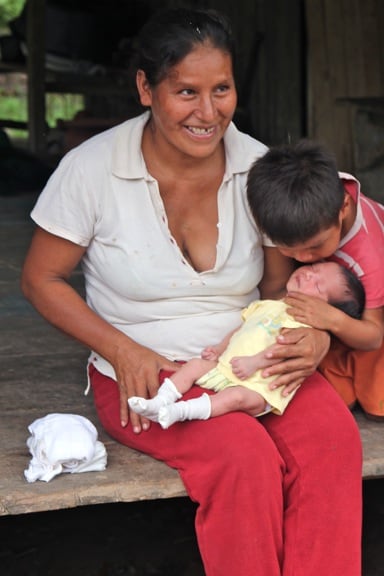 This was clearly the first photo that this mother had ever had taken of her and her newborn, and visible pride emanated from her beaming smile. But I was more intrigued by the baby’s brother, who seemed somewhat disinterested in his tiny sibling until he saw that photos were being taken!

Our favorite part of the Nueva York visit involved us going to the village’s tiny schoolhouse, where our guide Johnny Balarezo Malatesta presented the school with some supplies brought by IE passengers. After teaching us some Spanish words and the kids some English words, we had a fun cultural exchange in which we sang “Cómo Estás” with them, and they sang and danced “The Hoky Pokey” with us. It was pretty hysterical to see their looks on their faces as they watched us grown-ups dancing and grinning like overgrown kids. 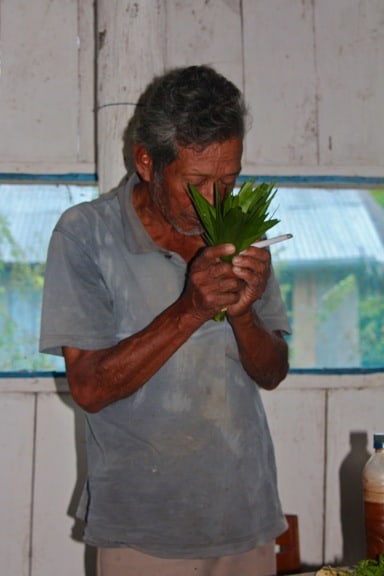 Equally memorable (but a LOT less silly) was the time we spent with 72-year-old Peruvian Shaman Don Juan, whom Johnny referred to as “Maestro.” Learning from, and being blessed by, him in his village of San Jose was arguably among the single most emotionally powerful moments we’ve ever had on our travels. 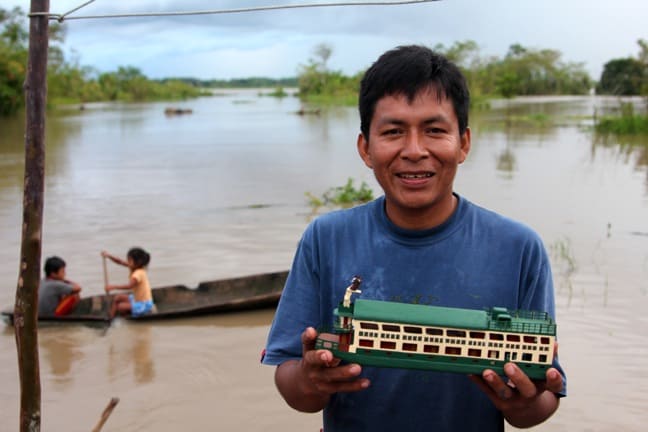 Though International Expeditions has upgraded to a new Amazon riverboat this year, I still regret not having the money to buy this artist’s scale-model replica of our boat, the Aquamarina. His work was extremely detailed, and I’m proud to say that one of his hand-carved gourds now hangs in our bedroom. It’s a wonderful reminder of our amazing experiences during our week in the Peruvian Amazon.  –Bret Love; photos by Bret Love & Mary Gabbett

PERUVIAN AMAZON:  Out Of The Village & Into The Jungle