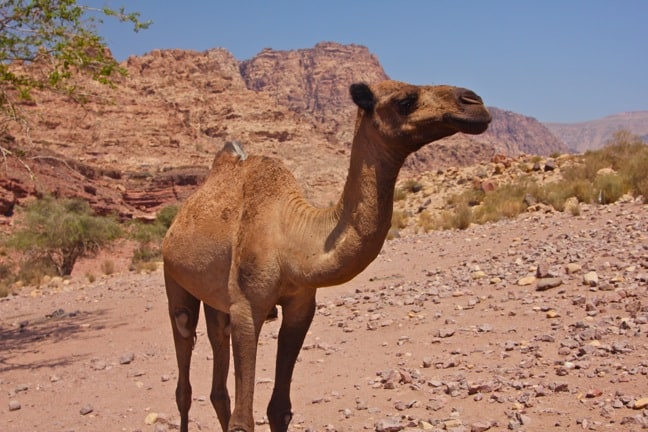 You know those days you occasionally have in your travels when you’re glad for the adventure, but you’d never, ever want to do it again? That’s an accurate summary of our day in the 119 sq mi Dana Biosphere Reserve, Jordan’s largest nature reserve.

We’re not hardcore hikers, and I’m not a huge fan of extreme heat. Had we known in advance that we’d be taking a 14-km hike over rugged mountainous terrain (which drops from around 1500 meters to the desert plains of Wadi Araba) during the middle of a 100º day… well, it’s safe to say I probably wouldn’t be telling you this story.

Things started out well that morning, as our naturalist guide spotted a small herd of incredibly rare Nubian Ibex moving slowly along the ridge of a mountain directly across from us. Soon, we met the first of many Bedouin shepherds bringing their flocks of goats and sheep to graze on some of the 800 plant species found within the reserve.

Around lunchtime, we ran into a friend of our guide’s father, a shepherd whose family had been working this land for hundreds of years. We invited him for Bedouin tea, and our guide quickly started a small fire and poured us some of the delicious brew (black tea with sage) as we sat in the cool shade of an Acacia tree.

The elder, whom our guide referred to as Abo Ahmad (“father of Ahmad”), dug into the rucksack on his donkey’s back and offered us some of his pita bread. So we, in turn, dug into our backpack and offered him an apple and a protein bar. Next thing you know, with typical Bedouin hospitality, he was inviting Mary to ride his donkey!

Eventually we went on our way, and it was then that things got increasingly difficult. Our guide was adjusting his keffiyeh and felt a sharp prick, then realized he’d been stung by a yellow scorpion (a.k.a. Deathstalker), which has a potent venom that is extremely painful and occasionally deadly. He was clearly in agony as we increased our pace and, as he tried sucking the toxins from his finger, we worried he might need immediate medical attention. But he assured us he was OK, telling us how his mom had put ash from burned scorpions in his milk as a child to help him build up a tolerance to the venom.

Eventually his swelling subsided, but the heat did not. The sun was merciless, our backpack full of water and camera gear began to feel oppressively heavy about 7 miles in, my hiking boots started falling apart, and I somehow found myself running from a crazy camel who took offense to our attempts at a photo op. But as I moaned and groaned about how miserable I was, we passed through a Bedouin village. As I saw how few simple comforts these people had in their lives, I began to feel very spoiled indeed and kept my mouth shut from that point on, instead focusing on putting one foot in front of the other.

I was relieved when we finally made it to Feynan Ecolodge. We were too exhausted to take advantage of their “Bedouin Experience,” which allows guests to visit the Bedouin village for a cultural exchange. But we did wind up sleeping on the roof of the lodge, eating fresh figs Ali had bought for us, and drinking Bedouin tea under a sky filled with more stars than I’d ever imagined could be seen in one night.  It proved to be a welcome reward after an exhausting (and, at times, unnerving) day.

Located 90 km south of Amman, Wadi Mujib is the lowest nature reserve in the entire world, with the gorge entering the Dead Sea at 410 meters below sea level. Its importance to the Hebrews dates back to biblical times (when it was known as the Arnon River), and its mountainous terrain remains a crucial habitat for wildlife, including 10 species of carnivores (such as the medium-sized cat, the Caracal) and numerous native and migratory bird species.

The 220 sq km reserve’s importance to us was slightly more trivial: It offered our first chance to get into the water in Jordan. After days of 96-degree heat, we were thrilled to hike up the series of waterfalls, which are fed by cool water flow from seven tributaries stretching north into the Kerak and Madaba mountains.

To describe the area as striking would be an understatement. The narrow canyon is surrounded by stunning sandstone cliffs with colorful sediment layers that looked like intricate works of art. As we ventured further upstream, the valley took on the look of the slot canyons of the American Southwest, occasionally getting so narrow that I could extend my arms and touch the walls on either side.

We climbed a series of refreshing waterfalls whose waters ran cold, crisp and clean, pulling ourselves up with ropes and ladders while trying to protect the camera gear in our backpack. Eventually, we got to one we knew we couldn’t climb without getting everything drenched. So we simply sat and savored the sumptuous view before hiking and floating our way back downstream to rendezvous with our guide, Ali, and make our way to the next stage of our amazing Jordanian adventure…  –Bret Love; photos by Bret Love & Mary Gabbett

Jordan- The Middle East & Our Culture of Fear