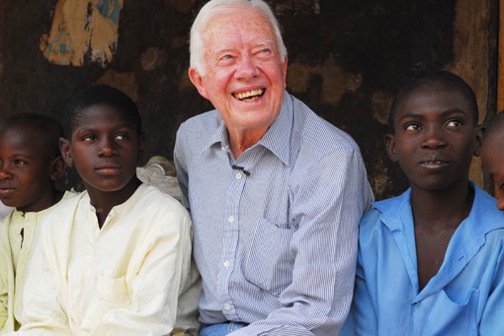 Born and raised in the small town of Plains, where his family has owned land since 1833, Jimmy Carter is arguably among the most accomplished individuals ever to spring from Georgia’s red clay soil. In addition to being the state’s only US president, the former Georgia governor is also a Nobel Peace Prize winner, bestselling author and respected lecturer at Atlanta’s prestigious Emory University. With the Carter Center, his post-presidency life has included over 25 years of work spreading democracy, negotiating peace and seeking cures for diseases around the globe. As a native Georgian, it was an honor and a privilege to speak with the former president, who revealed his thoughts on the state of the nation and the obstacles on the road to world peace.

When you were growing up in Plains, did you ever imagine you’d one day grow up to be President, or did that aspiration come later in life?

Much later. When I was growing up, my highest ambition was to go to the Naval Academy and get an education. Nobody in my family had ever been to college before. It was during the Great Depression, and my parents knew the only free universities were Annapolis and West Point. Going to Annapolis was my ambition the whole time I was growing up.

Most Presidents seem to fade from public view after leaving office, yet you’ve only increased your dedication to the causes of human rights, peace and health worldwide. What is it that drives this passion within you?

I’ve had a wonderful opportunity, challenge and obligation to fulfill the purposes of the Carter Center in Atlanta, which has very specific goals to promote the causes of world peace, democracy, freedom, human rights and the alleviation of suffering. The work of the center has been the avenue through which I’ve continued to maintain my interest and involvement in international affairs. 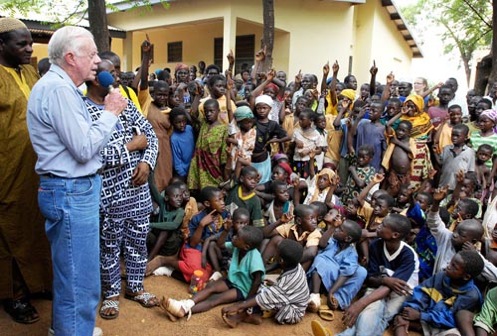 The Carter Center has achieved quite a lot. Is there any particular accomplishment of which you are proudest?

I think the work of the Carter Center demonstrates in the most vivid way the finest ideals that make all Americans proud. We promote the basic concepts of peace, negotiate to prevent and end wars, spread democracy and freedom by monitoring 68 elections on all the major continents, help to control or eradicate six diseases in the world, and promote mental health, and we also have a strong agriculture program through which we’ve taught about eight million families how to grow more food grain.

What do you think people can learn from your experiences?

The major thing I’ve learned is the character of the people we try to help. These are the poorest, most isolated, most neglected people in the world. And in dealing with literally millions of them, I’ve learned that they’re just as intelligent and ambitious and hard working as I am, with family values that are just as good as mine. 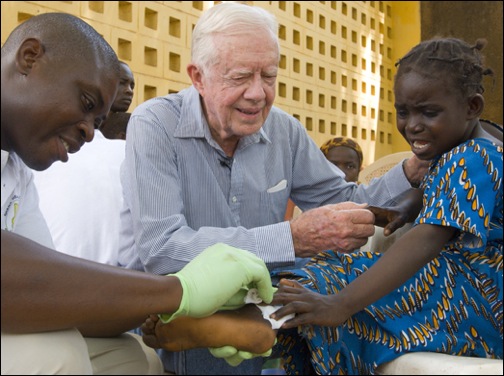 So would you say that the only thing separating us is the level of opportunity?

Given your remarkable success with revamping the voting process and promoting democracy in Third World nations, what fixes might you suggest for the problems with the American electoral system?

After the 2004 election, former Secretary of State James Baker and I made recommendations on how our electoral system can be improved. We essentially have over 400 different electoral systems, with each county having control. We have too much influence of money. In most countries, everyone who qualifies to seek office has guaranteed equal access to the news media, whereas in our country you have to buy TV and radio time, which is extremely expensive. Over the last 20 years, an excessive amount of that is negative ads, trying to destroy the reputation and character of your opponent. This has caused sharp divisions between Democrats and Republicans after the elections are over, and all that negativity condemning your opponent tends to make people think neither candidate is worthy of trust. Those things didn’t exist when I ran for office. 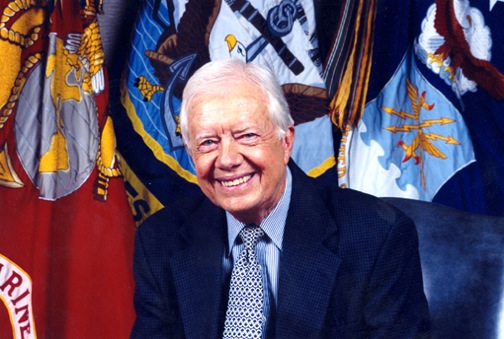 What do you consider America’s biggest challenges in smoothing the diplomatic bumps in our international relations?

We need to elevate the peaceful resolution of differences that are inevitably going to exist to a top priority, and make sure we communicate with people who disagree with us. We need to comply with international law. We need to protect human rights. We need to honor the agreements that have been reached in the past concerning the control of nuclear weapons. We need to preserve the environment. We need to make sure we have fair systems of justice and taxation so that working-class people get fair treatment… We need to cling to the values that have made this country great over the last 200-plus years.

What is the biggest obstacle on the road to global peace, and what can we as individuals do to conquer it?

I think the most powerful nations on earth, and certainly the United States, need to set the preservation of peace as a very high priority and avoid wars unless our own security is directly threatened. We need to give a higher priority to mediation and negotiation of conflicts that exist between other countries that might lead to military action, and let every nation know that if they have a problem that might lead to a civil war, they can turn to Washington for help in preserving the peace.

As you’ve watched world events unfold, has there ever been a part of you that longs to be back in the thick of politics again?

Not really. I think I have a role to play that’s much more gratifying to me, and maybe even much more effective, in the work of the Carter Center. We maintain a very strong and positive presence in over 70 nations around the world, among the poorest and most needy people on earth, and we’re deeply involved in international affairs. So I don’t think that I could possibly find a better opportunity to have an adventurous, gratifying, unpredictable and exciting life.

Plus, you don’t have to run every move you make by a few hundred congressmen. 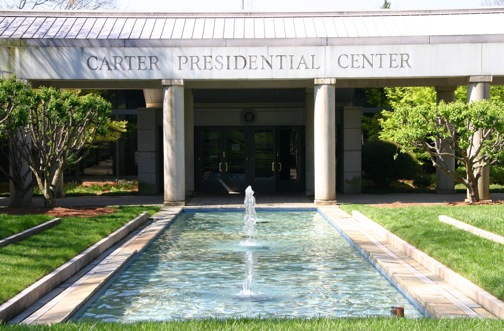 What’s your personal dream for the Carter Center’s future?

I would hope that the center would stay independent, flexible, idealistic and willing to take a chance if a project seemed worthwhile. I hope that we’ll reach out and get as many partners as possible to join us in worthy projects, and continue to be willing to let other people get credit when successes are realized. And I sincerely hope that the basic principles of morality, idealism and human rights will still prevail. – Bret Love