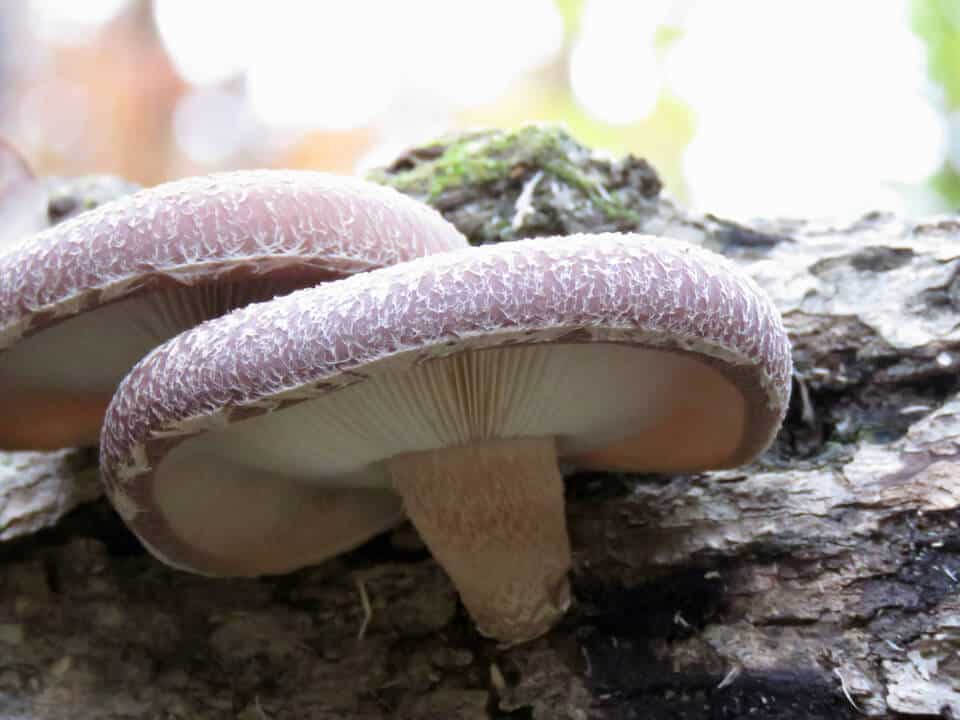 As many of us begin to look into producing food at home, it’s easy to become enamored with small vegetable plots and food forests.

So much so that we may overlook mushrooms as a wonderful addition to the self-sufficient person’s pantry. But we can easily grow mushrooms at home for about the same amount of money it costs to plant a garden.

While most people are accustomed to eating the button mushrooms we buy at the supermarket, that little fungi only scratches the surface of what’s available in the gourmet mushroom department.

In reality, those mushrooms are low on the flavor spectrum, and they’re much more persnickety to grow. “Grow mushroom” kits are available for them, but they end up costing about 12 bucks a pound.

On the other hand, choice edible mushrooms such as Shiitakes and Oysters can be grown at home for less than a dollar per pound! Unlike grow kit mushrooms, they can also provide you with food for years, fruiting over and over again.

In this article, we’ll discuss how to grow mushrooms at home, which are the best types of mushrooms to grow at home, and what we need to grow them. Not only is it going to be really interesting, but it could possibly lead to some of the tastiest homegrown food imaginable!

READ MORE: What is Permaculture Gardening? (Intro to Design & Principles)

HOW TO GROW MUSHROOMS AT HOME

Best Mushrooms to Grow at Home

There are many delicious types of mushrooms that be found while foraging in the forest. But not all of them can be grown at home.

Some of our most beloved edibles– such as chanterelle and morel mushrooms– have special symbiotic relationships with living trees.

This is something we just can’t reliably replicate at home, though folks are trying to find work-arounds.

However, many types of tasty mushrooms are saprobic fungi, meaning that they are decomposers. They specialize in breaking down organic material so that it can be cycled back through the forest system.

These are the mushroom varieties that we can most readily grow at home, because we can give them organic matter (typically some type of hardwood chips) to feed on.

Shiitake mushrooms are amongst the most commonly cultivated mushrooms, both in the United States and all across the world.

They are relatively normal looking in terms of fungi we know, with a bell cap and a little stem. But they like to grow on hardwood, especially oak and maple.

They are famed for having loads of umami– a certain I-don’t-know-what in terms of flavor– and they have a fairly meaty texture.

Wine cap mushrooms, which are sometimes referred to as King Stropharia, are also typical in appearance, though they do have a reddish cap and gray gills.

Rather than logs, however, wine caps prefer to grow on the ground in hardwood mulch, wood chips, or even thick layers of straw.

Wine caps are often described as having a flavor and texture similar to portobellos, with notes of white potato and asparagus.

Oyster mushrooms are familiar to most mushroom lovers, and they’re a great find when you’re out foraging in the woods.

Oysters are named for their oyster-like appearance. But their taste also suggests seafood (perhaps scallops) in terms of flavor and texture.

As its name suggests, lion’s mane mushrooms look a little like the mane of a lion, if said lion were an albino.

It is highly regarded for its medicinal value, which helps the brain when treating degenerative diseases like Alzheimer’s and dementia.

Lion’s mane is also among the most delectable mushrooms a person can come across in the wild. It tastes something akin to crabmeat or lobster, both in flavor and texture.

5. Maitake/Hen of the Woods (Grifola Frondosa)

This mushroom is native to both Japan and North America. It grows at the base of dying trees, but can also be cultivated on cut logs.

It can be very large, and has lots of grayish-brownish lobes that form a ball of mushroom madness.

It’s my personal favorite for flavor and texture because of the aforementioned umami thing. But for the sake of plain talk, they’re dense and juicy, and much more steak-like than portobellos.

As a vegan, it’s not a flavor/texture I often get anywhere else.

6. Chicken of the Woods (Laetiporus sp)

Chicken of the woods mushrooms are a popular forager favorite because they taste delicious (as the name suggests) and are easy to spot.

Chicken of the woods is bright orange, with large lobes that meet in the center. It’s usually about the size of a basketball, but brighter.

The underside is either yellow or white, depending on the species. It smells faintly of sulfur.

It is a fantastic substitute for chicken, both in terms of taste and texture.

Ways to Grow Mushrooms at Home

There are several different ways we can grow mushrooms at home, but most home cultivators use either logs or wood chips as the mushroom substrate (or host).

Mushroom kits, which typically use substrate bags or trays, are also widely available.

For some mushroom varieties, only one of these options is available. But some types are agreeable to growing in several different situations.

Most of the mushrooms we discussed above– including shiitake, maitake, lion’s mane, and chicken of the woods– are particularly well suited to mushroom logs.

Oyster mushrooms, which are arguably the most versatile of the bunch, also perform well on logs.

In general, this means using freshly cut (ideally no more than a month from being felled or limbed) hardwood logs.

The general consensus is that oak is the best choice, with maple, birch, and beech also being good options. Poplar, which is a softer hardwood, is said to work well for oysters.

Cultivating on mushroom logs has several advantages. They’ll produce for years to come: The general rule of thumb is one year for each inch of diameter (i.e. a log that’s six inches across will fruit for six years). They also don’t require sterilization or pasteurization like other mushroom substrates often do.

That being said, mushroom logs are a bit bulky to carry. And putting in the plugs (or sawdust spawn) is a bit of a process, requiring a drill and hot wax.

READ MORE: How To Make A Do It Yourself Vertical Garden

Some types of mushrooms, such as oyster and wine cap, can be cultivated on wood chips or straw, both of which can be bought at any garden supply center.

As far as the wood chips go, the fresher they are the better. This will ensure that they’ve not been contaminated by something else, and there’s still plenty for the mushroom spawn to feed on.

Cultivating on straw and wood chips can be advantageous because they’re easy to handle and can be put just about anywhere. A shaded mulch pathway works great for mushroom production!

They can also be easily purchased in most places, whether urban, suburban, or rural. Another nice aspect is that if the inoculated area is given fresh mulch or straw annually, it’ll keep producing ‘shrooms!

The downside to straw and wood chips is that they should be pasteurized (straw) or sterilized (wood chips) because they are prone to other lifeforms, like mold, colonizing them.

READ MORE: How to Attract Birds to Your Garden

While mushrooms can be grown on used coffee grounds, it’s better form to use the sterilized grounds as a supplement to a more carbon-rich substrate, such as sawdust or straw.

Because coffee is so rich, it does give the fungi rocket fuel. However it also makes the coffee grounds more susceptible to contamination. They also require a container (usually mushroom grow bags), which makes extra waste.

That being said, brewing the coffee does pasteurize the grounds. So if they’re kept in a safe spot, it shouldn’t be a problem.

The other beauty of using reusing coffee grounds is that it reduces waste. Lots of coffee shops will gladly give away grounds at the end of the day, because they’re often used for coffee compost as well.

This means you can get free mushroom supplies, and that’s a great thing!

READ MORE: Best Coffee in the World (A Gourmet’s Guide to 30 Types of Coffee)

Lastly, mushroom grow kits are widely available, from both specialized sites like Field & Forest as well as bigtime retail outlets like Amazon, Lowe’s, and Etsy.

However, these are usually more fun experiments for beginners than for serious gardeners.

Nevertheless, they can be a good way to ease into the hobby for those who are a little apprehensive.

How to Grow Mushrooms At Home

Growing mushrooms at home is a project best begun in the springtime.

In general, the naturally spawning mushrooms we want grow on wood. And wood is at its best for inoculating in the early spring, when it’s still dormant from the cold of winter.

How to Grow Shiitake Mushrooms on Logs

Growing mushrooms on logs is the same no matter which type of mushrooms we choose. Because shiitake are generally done on logs, we’ll venture through this one.

Fast-producing mushroom logs will provide their first fruit within six months, but it’s not uncommon for them to take longer.

The type of wood you use will often dictate this, with hard white oak taking longer and maple (which is not nearly is hard) taking less time. That said, harder wood will likely provide mushrooms for longer.

How to Grow Oyster Mushrooms in a Mulch Bed

These can be done as garden paths or actual garden beds, with the mushrooms popping up under the kale and chard. Oyster mushrooms are especially good for this approach.

Oyster is a relatively generic term for a plethora of different edible mushrooms, so it’s possible to grow a dozen different types of mushrooms this way. Wine cap mushrooms are another fantastic choice for this particular method.

READ MORE: What is Aquaponics? The Ultimate Beginners Guide

Where to Get Mushroom Spawn & Other Mushroom Supplies

Finding mushroom spawn for sale and other supplies for growing mushrooms is easy via the internet.

As with anything, rather than turning directly to Amazon to meet all our needs, it’s good practice to seek out small businesses and local sources.

Not only will specialist retailers know more about how mushrooms grow, but they will provide you with experienced, personal accounts to help you grow your own mushrooms.