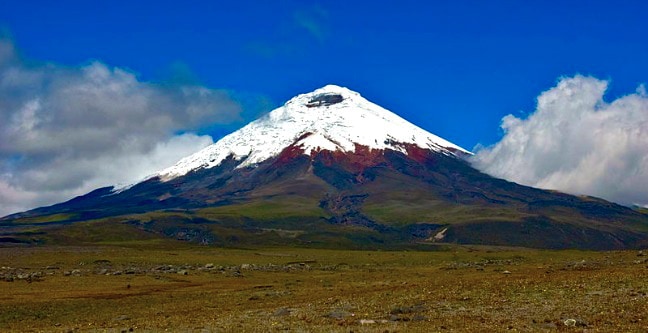 Some people wouldn’t consider a Volcano as their dream vacation destination due to the destructive power of these fire-breathing mountains. But Volcanoes also have positive environmental impacts: Their eruptions offset some of the effects of Global Warming by cooling down the earth, and the soil surrounding volcanoes is often very fertile. Just think about how many volcanic islands (Hawaii, Galapagos, etc.) are in the heart of a nature lover’s paradise! Here are our Top 10 Volcanoes for your World Travel Bucket List:

Every year more than 2 million people climb the winding trail to the summit of this notorious Volcano overlooking Italy’s Bay of Naples. Once you reach the summit, you’ll be awarded with a spectacular view into the wide crater. Mount Vesuvius has erupted many times: the best-known eruption buried Pompeii and Herculaneum under a thick layer of ash in 79 AD. It’s highly recommended to combine touring this volcano with visiting the remarkably well-preserved city of Pompeii, which was covered with ashes for centuries. Although Vesuvius’ last eruption was in 1944, it’s still marked as one of the most dangerous volcanoes in the world. If it erupts again, more than 3 million Italians will fall within its line of fire.

Kilauea (meaning “spewing”) is located in Hawai’i Volcanoes National Park next to Mauna Loa, the largest active volcano in the world. According to Hawaiian mythology, Kilauea represents Pele– the Polynesian goddess of fire– and the park remains a sacred place for native Hawaiians today. Kilauea has been erupting continuously since 1983, offering a unique guaranteed opportunity to see active lava flows. Seeing the lava flow into the ocean from a little boat is a sight you’ll never forget, and there are also lava-spotting opportunities on the lava fields. A UNESCO World Heritage Site, Volcanoes National Park also includes great hiking opportunities, the Thurston Lava Tube, Halemaumau Crater, the Thomas A. Jagger Museum, and the Volcano House, among other awesome tourist attractions.

The Sierra Negra Volcano is located in the dream destination of Isabela Island, the largest in the Galapagos archipelago. This Volcano, with its huge, 10-kilometer-wide caldera (the second largest in the world), last erupted in 2005. Second only to watching the region’s incredible wildlife, Isabela’s most popular eco attraction is hiking from the Sierra Negra caldera to Volcano Chico through an unreal landscape dotted with active volcanic zones. From the viewpoint on Volcano Chico, you get a fabulous vista over the other volcanoes on Isabela, as well as on Fernandina Island.

The 5897-meter Cotopaxi (one of the tallest active volcanoes in the world) is located in the Andes of Ecuador, near Quito. The indigenous people revered this snow-capped mountain as sacred, believing it would bless them with rain to make their land fertile. The most interesting among its long list of eruptions was the one in 1534, when locals were at war with the Spanish invaders. In the midst of an intense battle, the air suddenly became thick with hot ash and the mountain started spewing lava, causing both sides to flee in terror. Today, it’s possible to make a 2-day climb to the top of the Volcano, from which you’ll have an incredible view over the surrounding Andean landscape.

Prominently featured in The Lord of the Rings trilogy, New Zealand’s Tongariro (which is comprised of at least a dozen cones) is one of the world’s most visited Volcanoes. Its first eruption occurred more than 275,000 years ago, and the different vents have all erupted regularly since then. Although Ngauruhoe is the most active cone, it was Te Mari that erupted unexpectedly in 2012, briefly closing down the popular Tongariro Alpine Crossing. Located on NZ’s North Island, Tongariro National Park was declared sacred by the Maori tribe in the 19th century, and was one of the first protected National Parks in the world. Today, the Tongariro crossing hike is more popular than ever.

Boasting an altitude of 2,329 meters, Mount Bromo is not the highest peak in Indonesia. But it’s definitely the most popular one, and also one of the most important tourist attractions in East Java. The mountain was named after the Hindu god Brahma, and is one of many active volcanoes known to have been part of ancient rituals involving sacrifices to appease deities. A princess started the tradition known as the “Yadnya Kasada” ceremony in the 15th century, offering her 25th child as a human sacrifice. Now, every year people offer food and cattle to the Volcano during the annual festival, and retrieving these sacrificed goods is believed to bring good luck. Watching the sunrise over this peak is very popular, and provides some seriously out-of-this-world views.

This youngster, just 7000 years of age, is located in La Fortuna, Costa Rica. Until the end of 2010, Arenal was one of the world’s Top 10 Volcanoes in terms of eruptions: Visitors could usually count on seeing this 1600-meter mountain spewing magma, with lava streaming photogenically down its flanks. Although dormant for nearly 3 years now, the area is still a dream destination for many travelers, with ecotourism attractions including Lake Arenal, La Fortuna Waterfall, various hot springs and, of course, the Volcano, which looms ominously over a verdant landscape, like a sleeping giant waiting for an opportune moment to re-awaken.

In Japanese, “Sakura” means cherry blossoms and “Jima” means island. But there’s nothing on Sakurajima that would suggest a harvest of cherry blossoms coming anytime soon.Located in Japan’s Kagoshima Bay, the island features a picturesque, 1117-meter peak that appears to rise from the surface of the sea. Taking a ferry from Kagoshima to Sakurajima is one of the most popular tourist activities in this region. There are several hiking trails on the island, hot sprints, and a visitor centre. A word of warning: This Volcano has been erupting continuously since 1955, so caution definitely needs to be exercised when visiting.

The snow-capped Mount Shishaldin– the highest peak of the Aleutian Islands in Alaska– has erupted many times in the last couple of centuries. Due to its remoteness, there are no significant human settlements in the area. The only signs that help discern volcanic activity here are melting snow on the peak and the emanation of ashes, which can disrupt the visibility of aircrafts. Taking a flightseeing tour from the Cold Bay Airport will provide you with incredible views of this majestic white peak, but climbing Shishaldin and skiing back down its slopes is a popular activity among local daredevils.

With more than 1000 earthquakes a year to its credit (most of them minor), this super-volcano in Yellowstone National Park has inspired many Hollywood movies. America’s oldest national park is a “hotspot” in more ways than one– a huge area of volcanic activity filled with spewing geysers, boiling mud pots, and hot springs. These natural features (as well as the abundance of megafauna and other wildlife) attract millions of tourists to the park each year. The last eruption in Yellowstone was more than 600,000 years ago, and experts don’t expect another one in the next 5,000 years. So you still have plenty of time to give this awe-inspiring park a visit.  –by Freya Renders