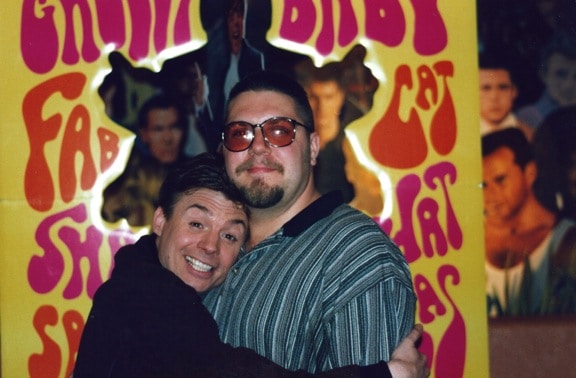 HOW DO YOU BECOME A WRITER?

The one question people ask me more than any other is, How did you become a writer? This is the somewhat long, but very detailed  answer– a revealing look at the journey that brought me where I am today, and some valuable lessons I learned along the way.

I wasn’t supposed to be a writer.

A world-famous rock star, a record label-owning talent mogul and/or producer, maybe. But the closest I came to journalism in my college studies was one creative writing course.

No, me being a writer was one of those happy accidents that only seem to happen when you’re willing to go with the flow of the Universe, taking advantage of opportunities without trying to force your own agenda on Fate.

I was majoring in Music Business at Georgia State University, putting myself through school by working a 30-hour-a-week night job delivering pizza. One of my co-workers at said pizza place got a job as program director for WRAS/Album 88, one of the top college radio stations in the country. So it was that I landed an unpaid gig as a DJ on the graveyard shift, from 2-6AM once a week.

LESSON LEARNED: You never know who may be your next great connection.

While at WRAS, I saw an ad on the bulletin board for a marketing internship in the Alternative Music department at BMG, one of the largest music distribution companies in the world.

After several interviews, I was hired as assistant to the Southeast region Marketing Director, making about half what I made at the pizza place but getting to work with major artists such as Tool, Henry Rollins, A Tribe Called Quest and Sarah McLachlan.

As a devout music lover I was in heaven, with all the free CDs and concert tickets I could want, not to mention the opportunity to hang out with musicians whose work had inspired my own.

While I was at BMG, a guy named Marc was hired in the mailroom. Marc worked for a new college newspaper, University Reporter, as their Music Editor, and we struck up a friendship.

A longtime fan of magazines like Spin and Melody Maker, I asked him how to become a music journalist, as I had no clue. The paper didn’t pay, he said, but they were desperate for writers, and he “hired” me on the spot.

That was March of 1993, and I reviewed Tool’s Undertow and Primus’ Pork Soda for that issue. With each subsequent issue, I wrote more and more. The paper had no connections, so through my music biz friends I began tracking down record labels, making connections, sending clips of my writing and requesting CDs.

In the summer of 1993 my BMG internship was over (i.e. I was laid off), and I was devastated. But I focused on writing, averaging 10 CD reviews per issue plus columns on world music and jazz.

LESSON LEARNED: See failures as an opportunity, not a setback.

In early 2004, one of the UR’s publishers (Shane Finkelstein, to whom I owe a great debt of gratitude) began encouraging me to try my hand at doing interviews. The paper was growing and needed more editorial, and I was becoming increasingly confident in my skills.

I was nervous, but dove in head-first when I learned that one of my favorite artists– Chuck D of Public Enemy– was coming to town. My friend who worked at his label couldn’t guarantee me an interview, but invited me to an appearance Chuck was making and said he’d do his best.

We began the day at an industry luncheon, where Chuck gave a passionate speech about how screwed up the music business was (5 years before Napster toppled the empire and companies like BMG went the way of the dodo). At the end, I got to meet my idol, and I was ecstatic.

I followed Chuck to a celebrity basketball game, where he raised money for charity. There, after 6 hours, I FINALLY landed my dream interview, getting 30 minutes 1-on-1 with the biggest name in hip-hop. I was hooked!

From that point on, whatever else I may have once aspired to be, I was a Writer. When Marc stepped down, I became Music Editor (still unpaid) and interviewed the biggest bands of the day, including Red Hot Chili Peppers, Jane’s Addiction, De La Soul, P-Funk and hundreds more.

I bought a camera and started shooting concerts 3-4 nights a week. Eventually I was named Entertainment Editor, and got to interview celebs such as Adam Sandler, Mike Myers and Chris Rock, as well as counter-culture icons such as Timothy Leary and Beat poetry legend Allen Ginsberg.

That same editor wound up overseeing an encyclopedia of world music, to which I contributed more than 70 entries. An editor for Rolling Stone contacted the PR rep for Sonic Youth, searching for a photographer who was shooting their Atlanta show: She referred him to me, and suddenly I was doing photos and reviewing concerts for the biggest music magazine in the world.

After doing lots of local and phone interviews with people from the film, TV and comedy worlds, I started getting flown out to film junkets. My first one, in DC for 1996’s Courage Under Fire, found me interviewing Matt Damon, Denzel Washington and Meg Ryan.

My second one was for Ransom and The Crucible: In one day, I interviewed Ron Howard, Mel Gibson, Rene Russo, Daniel Day-Lewis, Winona Ryder and legendary playwright Arthur Miller.

After our publication changed its name to INsite Magazine in 1996, things built slowly and steadily into a 15-city editorial network with me as the National Managing Editor.

I still wasn’t making great money, but I was getting to travel a lot to interview world-famous rock stars and movie stars (including going to Scotland to interview Sean Connery and England to interview Hugh Grant), and I was doing what I loved.

I started dipping my toes into travel writing, going to Jamaica, Alaska, Costa Rica and, the trip that would change my life (and inspire what eventually became Green Global Travel), South Africa. It was then that I realized my passion for ecotourism and sustainable travel, and slowly began making moves towards focusing on that field of journalism.

LESSON LEARNED: Sometimes life experience is worth MUCH more than a big paycheck.

And then it all came crashing down. Due to interpersonal conflicts between publishers, the editorial network fell apart in 2001, and there wasn’t enough money to pay my salary. Three months before my daughter was born, I found myself forced to become a freelancer, working part-time for INsite for around $10,000 a year.

I panicked… but I also sent emails to every publicist I’d ever worked with, letting them know my situation and asking for leads. I landed local gigs freelancing for the Atlanta Journal-Constitution and AOL CityGuide, and then started pounding the pavement (via the Internet) for new clients.

Eventually I landed several major national publications, and by 2003 I was making more than I ever had at INsite (i.e. over $50,000 a year).

LESSON LEARNED: Never be afraid to ask for help when you really need it.

In the years since, my career has had its fair share of ups and downs. In 2005 a major men’s magazine went out of business, stiffing me on $3,500 in past due invoices (and, in conjunction with having my car totaled by an uninsured motorist, leaving me bankrupt).

In 2006, my man DeMarco Williams reinvigorated my freelance career by introducing me to his editor at AirTran’s GO Magazine, a relationship that has led to working with more than a dozen other major airline magazines all around the world.

In fact, as I look back on my 18-year writing career, most of my best gigs have come from friends who recommended me to someone, or from someone seeing my work in a magazine and contacting me directly.

LESSON LEARNED: Take care of, and be loyal to, those who have taken care of you.

Being a freelance writer isn’t easy: It takes drive, dedication, determination, dependability and, most of all, hard work. To quantify it (for those of you who like cold, hard facts), here is a list of publications I contributed to last month, and what I wrote for them.

For those keeping score, that makes 18 features, over a dozen reviews, and editing two publications, in addition to our work on Green Global Travel.

In total, that’s around 25,000 words of writing. Looking back on this long, detailed history of mine, I wouldn’t change it for the world, and even at the age of 43 I find myself as excited as a kid in a candy store to see what my career will bring to my crazy life next.

If you’ve read this far, if you’ve absorbed every detail of my story and you’re still thinking, “I WANT THAT!” then I have an offer for you.

One of my greatest accomplishments in my career is not my own writing, but the success of the other writers I’ve mentored along the way (Google DeMarco Williams, David Peisner, Donna Freydkin, Scott Steinberg, Russ Fischer and Matt Goldberg to see the work of a few full-time freelance writers who’ve worked for me in the past).

We’ll soon be offering a Writing Mentorship program to help aspiring professional writers refine their craft, polish their best pieces, and connect with paying editors looking for freelance pitches. If you’re interested in getting more info, please leave a comment below or email me at GreenGlobalTravel@gmail.com. And thanks for reading my story! –Bret Love

If you enjoyed reading Becoming A Professional Writer: How I Did It, & You Can Too, you might also like:

How We Quadrupled Our Blog Traffic In 6 Months

How To Work With Interns