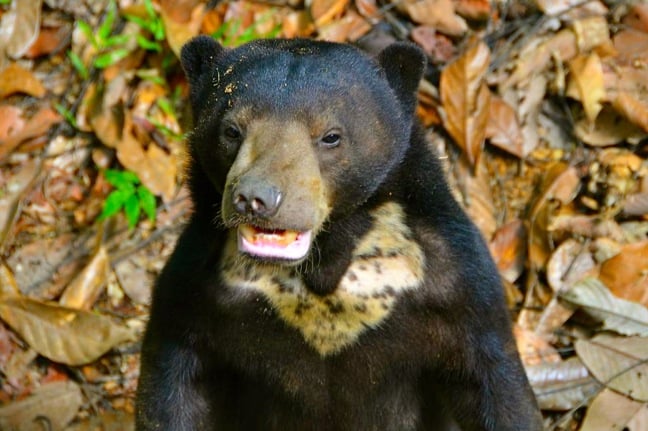 (The following is a guest post by Leyla Giray Alyanak, a former foreign correspondent who belonged to the WWF International management team, and now blogs about her travels at Women on the Road. If you’re a blogger interested in contributing a guest post, please contact Bret Love at GreenGlobalTravel@gmail.com.)

When the Borneo Sun Bear Conservation Centre opened its doors to the public, visitors were treated to a rare sight: 28 of the world’s smallest bears, as curious about us as we are about them.

I was fortunate to get a sneak peek behind the scenes at the BSBCC on a recent visit to the Malaysian state of Sabah. Everything is set: The visitor center and a second bear house is built, and half a dozen cubs are already clambering over tree trunks and branches, looking around with mischief in their eyes.

Guaranteeing the Sun Bear’s survival in Borneo is one of the main reasons behind the conservation centre, and protecting its rainforest habitat is part of the centre’s mission. Unfortunately, Helarctos malayanus has been under serious threat throughout the rest of its range. In some places, including Bangladesh, China, India, Myanmar and Vietnam, it has all but disappeared.

The Sun Bear is a diminutive creature– the smallest of the world’s eight bear species.  An adult male stands at about 1.5 meters (or five feet) in length, around the size of a large dog.

Known as a “honey bear” (for its appetite) or “dog bear” (for its size),  it is jet black, with a crescent-shaped patch across its chest. It also has a distinctive long, thin tongue, which it uses to delve into honeycombs, ant hills and termite mounds.

The Bornean Sun Bear, Helarctos malayanus euryspilus, is the smallest of the two sub-species.

Some scientists believe there may be only 10,000 Sun Bears left in the world. It’s hard to tell, though, as mistaken sightings and rare species surveys have made estimates unreliable.

According to the IUCN Red List of Threatened Species, the global Sun Bear population may have declined by up to 30% in the past 30 years, which is the equivalent of three bear generations.

Malaysian Sun Bears are protected and the IUCN classifies them as “vulnerable.” But that doesn’t mean they’re safe.

Sun Bears need the forest to survive, but much of Sabah’s rainforest has been cleared for palm plantations. Fly from Kota Kinabalu to Sandakan and you’ll notice orderly rows of commercial palm trees, like a polka dot pattern across the land.

Logging for hardwood trees has also helped destroy forests, leaving behind fragments too small to provide Sun Bears with a suitable habitat. Clearing continues, although the government has taken action to protect large tracts of land in a last-ditch effort to save one of Southeast Asia’s few remaining major tropical forests. Still, many conservation groups fear that isn’t enough, and the past destruction can’t be reversed.

“Given the Sun Bear’s dependence on forest,” says a 2008 assessment by IUCN, “it is clear that the large-scale deforestation that has occurred throughout Southeast Asia over the past three decades has dramatically reduced suitable habitat for this species.”

READ MORE: How to Avoid Products with Palm Oil

Sun Bears are often victims of poaching, especially for the illegal trade in wildlife body parts. Their meat is still eaten in some parts of Borneo (mostly in Indonesian Kalimantan, although this is increasingly rare), and the bile from their gallbladders is highly prized in traditional Chinese medicine.

As if all that weren’t enough, the little bear can face attack by other animals, like large cats, although this tends to occur more in Sumatra or on the Asian mainland. Snakes can occasionally be a threat. One female Sun Bear was swallowed whole by a reticulated python while she was asleep.

But one of the most pervasive threats to Sun Bears is the human desire to own them as pets. Many of the Borneo Sun Bear Conservation Centre’s animals have been confiscated from owners who didn’t even know they were breaking the law.

So there’s clearly a pressing need for public education. But, even when the laws are known, they are often ignored, despite strong sanctions that include fines of up to RMY 50,000 (about $15,000) and five years in prison.

Still, rangers keep finding pet cubs. “It’s a very bad situation,” said Malaysian wildlife scientist and bear expert Wong Siew Te, the founder of the BSBCC. “When held captive in small cages, some of them have gone crazy or exhbited odd behaviours. So setting up this centre was urgent.”

Help Is At Hand

Dr. Wong, a former co-chair of the Sun Bear Expert Team for the IUCN/SSC Bear Specialist Group, hatched the idea for BSBCC after witnessing the Sun Bears’ suffering first-hand while doing his Masters of Science research.

“I often visited places where they were held in captivity– in small cages, mini-zoos or private homes, often in disgusting conditions,” he recalls. “They all suffered badly. Some were cubs, others were adults, but all were desperate for space. It left me heartbroken, and that’s how I first got the idea for the BSBCC.”

Back in 2008, that dream started taking shape with the rescue of seven Sun Bears and a partnership with the Sabah Wildlife Department, the Sabah Forestry Department, and the NGO Land Empowerment Animals People (LEAP).

The sanctuary started from scratch with an old bear house, where rescued bears were held by the Forestry Service. An initial fundraising effort of $4000 was enough to build the first proper bear house, but fundraising for Sun Bears is not easy. Donations tend to go to the larger, more popular charismatic megafauna.

“Sun Bears aren’t very well known,” Dr. Wong explains, “so many NGOs have not wanted to work with them, preferring better-known species like orangutans, elephants, rhinos and so on. The Sun Bear is facing a dark era.”

Today, 28 orphaned bears share the BSBCC’s 2.5 hectares of natural forest environment. And soon everyone will be welcome to see them. The centre will house the bears in both forest enclosures and in a specific expanse of woods designed to teach them how to live in the forest after many years of captivity. Those who can’t be rehabilitated will at least be able to thrive in a decent environment.

In addition to protecting the bears and their habitat, the BSBCC also wants to raise awareness about this relatively unknown species. Not just locally, but also globally. “It’s a holistic approach to Sun Bear conservation,” Dr. Wong explains. “It involves animal welfare, rehabilitation, research and education. It’s the first facility of its kind in the world.”

The sanctuary has just 11 people on staff– far fewer than needed– but hundreds of local and international volunteers have proven willing to help out. The Centre also has a volunteer program for travelers who would like to work more closely with the Sun Bears, or students who wish to learn more about these adorable creatures.

Fortunately, the fact that the BSBCC is located next to the Sepilok Orangutan Rehabilitation Centre  and the new Rainforest Discovery Centre  means it can likely expect to receive a steady stream of visitors who are fascinated by wildlife. If you are among these visitors, just know that the Sun Bears will surprise you. And, judging by the looks they gave us during our visit, you’ll surprise them, too.  –by Leyla Giray Alyanak; photos by Anne Sterck

10 Things to do in Coron Palawan