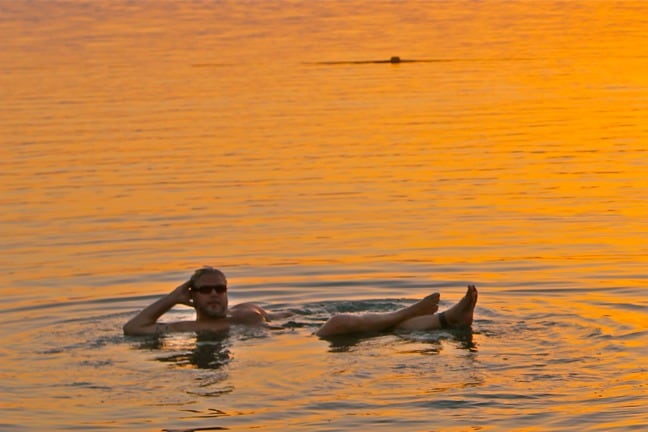 I’m lying on my side casually, as if I’m lounging on my comfy king-sized bed back home. But I’m actually floating effortlessly atop the water of Jordan’s Dead Sea, which is not actually a sea at all. At 997 feet, this is the deepest hyper-saline lake in the world.

The scenery this evening couldn’t possibly be more picturesque. There are surprisingly few people around, and the still water offers a perfect reflection of the gorgeous red-and-orange sunset over the coast of Israel in the background.

I’m posing gamely for Mary’s camera, but my smile doesn’t come easily. We’ve been warned not to stay in the water– which is approximately 9.6 times as salty as the ocean– for more than 15 minutes.

But after 15 seconds in the water my sensitive skin is already SCREAMING for me to get out. Blame it on the salt. Blame it on several days hiking through the Jordanian desert in the blistering hot sun.

Blame it on the boogie, for all I care. At this point, I’m much less interested in the cause of my agony than I am in the cure. I impatiently urge Mary to hurry, my flesh feeling as if a million different nerve endings are on fire. The intensity of the burn only seems to increase with each passing moment.

Less than five minutes later I’m sprinting (awkwardly, given the fact that I feel like I’m floating in space) towards the shore and into the shower, frantically rubbing the mineral-rich Dead Sea water from my body. I’ve never in my entire life been so happy to see a swimming pool nearby…

THE HISTORY OF THE DEAD SEA, JORDAN

Billed by the Jordan Tourism Board as “the world’s most amazing place,” the Dead Sea is one of those incredibly unique natural wonders that inevitably seem to wind up on every world traveler’s bucket list.

Photos of travel bloggers reading newspapers while floating on the Dead Sea once seemed like some sort of bizarre requirement for initiation into the community. I can picture their broad-grinning faces even now in my memory, shamelessly inducing my FOMO (fear of missing out) without even a subtle hint of the pain (the pain!) to come.

Located in Jordan’s picturesque Rift Valley, nearly 1,400 feet below sea level, this hypersaline lake has attracted travelers from throughout the Mediterranean for thousands of years. It was referred to in the Bible as the Sea of Salt, the Sea of the Arabah, and the Eastern Sea

According to the Hebrew Bible, people living in caves near the Dead Sea pre-dates the Israelites’ migration to Canaan. It’s believed that Sodom, Gomorra and the other “Cities of the Plain” described in the Book of Genesis may have been located on its shore. The area nearby later served as a sanctuary in which King David could hide from Saul.

The ancient Greeks and Romans referred to the Dead Sea as “Palus Asphaltites” (Asphalt Lake) due to the steady stream of pebbles and blocks of the black stuff that rise from seeps deep beneath its surface. Aristotle marveled over these immensely salty waters, and the ancient Egyptians used the asphalt for embalming during their mummification process.

Kind Herod built numerous palaces and forts on the Dead Sea’s western bank, the most of which is Masada (now one of Israel’s top tourist attractions). Machaerus, another historically important fort on the eastern shore, is thought to be the place where John the Baptist was imprisoned and, ultimately, executed.

In the Old Testament, God refers to the Jordan River Valley (which surrounds the Dead Sea) as the “Garden of the Lord,” also known as the Garden of Eden. There’s no historical data to put an exact date on when humans started using the Dead Sea for therapeutic purposes, but Herod the Great did establish one of the worst’s first health resorts there.

In modern times, the Dead Sea has become a major tourist attraction renowned for its magical healing properties. The dry climate, low allergen content, oxygen-rich air (which is good for asthmatics), reduced UV levels (due to distance from the sun), and high mineral content in the Dead Sea’s water and mud have been found to be beneficial in various ways.

People with psoriasis are given climatotherapy, sunbathing there for long periods without the usual skin cancer dangers. People with osteoarthritis have less pain in their joints after receiving Dead Sea mud therapy.

People with rhinosinusitis get better relief from Dead Sea saline nasal irrigation than typical saline sprays. And people with cystic fibrosis seem to breathe much in the area easier thanks to its higher atmospheric pressure.

And, of course, the Dead Sea is known all around the world for the use of its salt in therapeutic bath and beauty products, from facial cleansers and bath salts to masks and moisturizers. So our expectations were naturally heightened looming before we slathered on the healing mud by the water’s edge.

READ MORE: The Secret Trail in the City of Petra, Jordan

By the time we got to the Dead Sea in Jordan, we were both desperately in need of a little rest, relaxation, and relief ourselves.

Our previous three days in Jordan had started with a grueling 14-kilometer trek in the midday heat through the deserts of the Dana Biosphere Reserve. We followed that by climbing over 1,000 steps to see the Treasury and Monastery in Petra in one day. Then we spent a sleepless night partying with local Bedouins in the Wadi Rum desert.

We’d dealt with surly donkeys, faced down Deathstalker scorpions, and been chased by angry camels through the desert. We’d hiked so much, through such uneven terrain, that my favorite boots literally fell apart on my feet.

So by the time we arrived at the luxurious Kempinski Hotel Ishtar Dead Sea, we were utterly exhausted, emotionally spent, and eagerly anticipating a rejuvenating 5-star experience.

But, as the great Scottish poet Robert Burns once wrote, “The best-laid plans of mice and men often go awry.” Little did I suspect how different our experience would ultimately be from our expectations.

Our arrival at the 5-star Kempinski Hotel Ishtar Dead Sea certainly seemed promising. Our hosts were gracious and accommodating, practically rolling out the red carpet to welcome us. The lobby was so posh, we were self-conscious of the fact that we might reek of several days worth of sand, sweat, and camel.

Our luxurious room was spacious, well appointed, with stunning scenic views of the Dead Sea. The delightfully cool air-conditioning was a welcome (if not so eco-friendly) development after numerous days in the blistering hot desert.

We stripped off our dirty clothes the instant we walked in, breathing a huge sigh of relief as we entered our lair of luxury. Hot showers and several glasses of cold water went a long way towards curing what ailed us, and a brief nap made me feel somewhat human again.

It was nearly sunset by the time we finally headed out, past incredible infinity pools and lushly landscaped grounds, towards the Dead Sea.

The beach was surprisingly uncrowded as we found an attendant to apply the famous Dead Sea mud to our skin. The handsome young Jordanian clearly relished his job of smoothing the thick goop onto the ladies, gently massaging it into Mary’s skin as she grinned like the Cheshire Cat.

If only my Dead Sea experience had been limited to documenting her enjoyment, it would’ve been a very different day.

As I sat down for the application of these mythically powerful minerals, I felt a little like a Native American warrior getting ready for battle. But the more mud he spread on my body, the more I began to feel like a casualty of war.

READ MORE: Jordan, the Middle East & Our Culture of Fear

It began with an intense, radiating warmth, like a sunburn whose heat has no way to dissipate. Then there came an itch, like little ants crawling across your body, which have not yet begun to bite.

By the time Mary and I posed for the requisite covered-in-mud photo you see above, it had begun to sting, and I quickly moved down to the water hoping to soothe the pain.

Needless to say, the waters of the Dead Sea didn’t help matters whatsoever. It was quite literally like salt on an open wound.

By that time, not only was I incredibly uncomfortable, I was also completely bored.

Honestly, we had a lot more fun lounging around the pool, soaking in the sunset, and checking out the remarkably risqué (for the Middle East) clothing choices of the women at the dinner buffet than we did immersing ourselves in the Dead Sea.

Even Mary, who had none of the skin irritation issues I had, came away from the experience feeling more than a little underwhelmed.

In the end, visiting the Dead Sea in Jordan seemed more like something you do just to say that you’ve done it– an item to cross off your “Natural Wonders of the World” bucket list. Despite its history and purported health benefits, the Dead Sea was arguably our least favorite ecotourism attraction in Jordan. 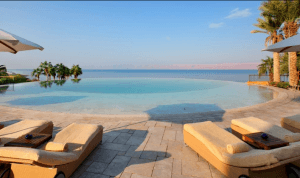 Kempinski Hotel Ishtar – We don’t often indulge in 5-star luxury resorts, but this one on the shores of the Dead Sea was the perfect place to wind down our exhilarating 10-day Jordan adventure. After floating in the salty sea, cool off in their gorgeous infinity pool or treat yourself to some pampering from their impressive day spa. Compare Rates or Read Reviews. 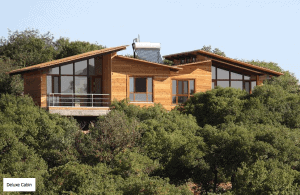 Ajloun Forest Reserve Cabins – Constructed in 2012 and set in the heart of a pristine nature reserve, these deluxe cabins boast terraces that offer stunning views of the north Jordanian mountains. If you listen closely at night, you might hear cackling Hyenas echoing through the hills. Jerash Roman city is 40 minutes away by car.  Compare Rates or Read Reviews. 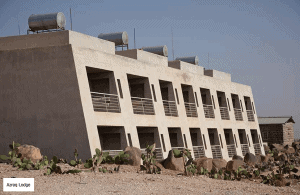 Azraq Lodge – If your Jordan travels take you to the Azraq Wetland Reserve, then you may want to check out this simple lodge (formerly a British military hospital). It has 1940s-style rooms with picturesque views of the Azraq Basin mud and sand flats. The kitchen gets rave reviews because it’s run by local women preparing traditional homemade recipes. Compare Rates or Read Reviews. 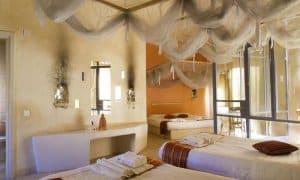 Feynan Ecolodge – Located inside the Dana Biosphere Reserve, this award-winning eco lodge is frequently ranked among the best in the world for its numerous sustainability initiatives. The restaurant is exceptional, and sleeping on the roof was a once-in-a-lifetime experience.  Read Reviews. 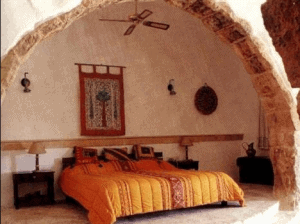 Hotel Taybet Zaman – Located near Petra, this charming hotel was once the bustling village of Taybeh. The mayor suggested turning it into a tourist hideaway, run in partnership with the local community. Its authentic Bedouin-style rooms combine traditional and modern, while the pool is sublime and the restaurant exquisite. Compare Rates or Read Reviews. 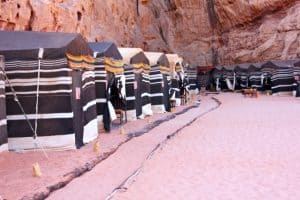