The stark beauty of the Dolomites Mountains is comprised of jagged peaks, Alpine meadows, and impossibly blue lakes.

So it comes as no surprise that the Dolomites are one of the most beloved travel destinations in the Italian Alps. Or that kayaking and hiking the Dolomites have become increasingly popular outdoor recreation activities among adventure-lovers in Europe and around the world.

Their name derives from dolomite, the type of rock that dominates the region. The rock’s carbonate has a unique pale color that becomes a shimmering pink at sunrise and sunset, thanks to their ability to reflect sunlight.

The Dolomites are located in northeastern Italy, close to the country’s border with Austria. They’re not a single mountain range: Instead, there are several distinct mountain groups that make up the Dolomites, with 18 peaks that rise to above 3,000 meters and cover 141,903 hectares.

The Dolomites are a year-round travel destination. In winter, they’re perfect for skiers, with a variety of impressive ski resorts to choose from (including the Olympic runs of Cortina d’Ampezzo). Ski season lasts well into spring. As soon as it’s over, hiking season begins.

Summer is the ideal time to go hiking in the Dolomites, as temperatures are warm and the snow that covers the high passes is usually melted (except on the highest glaciers). It’s also great to hike the Dolomites in the fall, when the leaves change color. There are fewer visitors during this shoulder season, and the snow hasn’t quite started yet.

Another popular pastime is kayaking in the Dolomites. The region is dotted with several sapphire-colored glacial lakes, some of which are just a few kilometers long. Lake Garda (Italy’s largest lake) is located near the Dolomites, and offers plenty of opportunities for exploration on a canoe, kayak, or even stand-up paddleboard!

There are literally hundreds of Dolomites hiking routes, and dozens of places to choose from to go kayaking. Here we’ve included five of our five favorites. If you’re planning a summertime trip to hike the Dolomites, make sure you include some of these places in your itinerary! 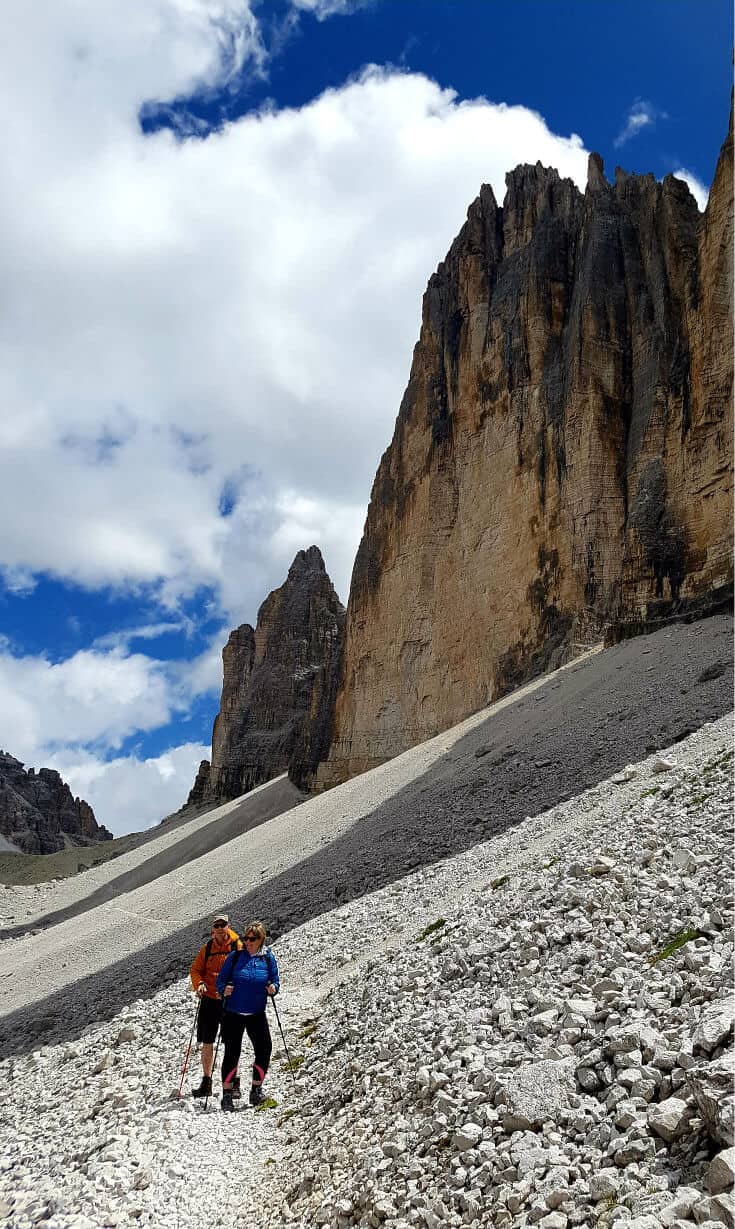 The Dolomites have been a popular vacation destination for well over 100 years. The area was among the favorite getaways of the Habsburg Monarchy rulers in the 19th century.

Much of World War I was fought along those mountains, which were once the border between Austria and Italy. Today it’s still possible to visit trenches, forts, and paths that were built by soldiers from the war’s opposing sides.

The Brenta Dolomites, which are located further west from the main Dolomites massifs, are one of the best places to experience via ferrata (Italian for “iron path”). These hair-raising protected climbing routes were originally created by WWI soldiers. They were used to carry supplies and to help the troops move across the mountains in difficult conditions.

One of the most scenic routes is the Bocchette Centrali, a day-long hiking path that takes you over ladders and steps traversing bare rock faces. The alien landscape looks almost like something you’d see in outer space. 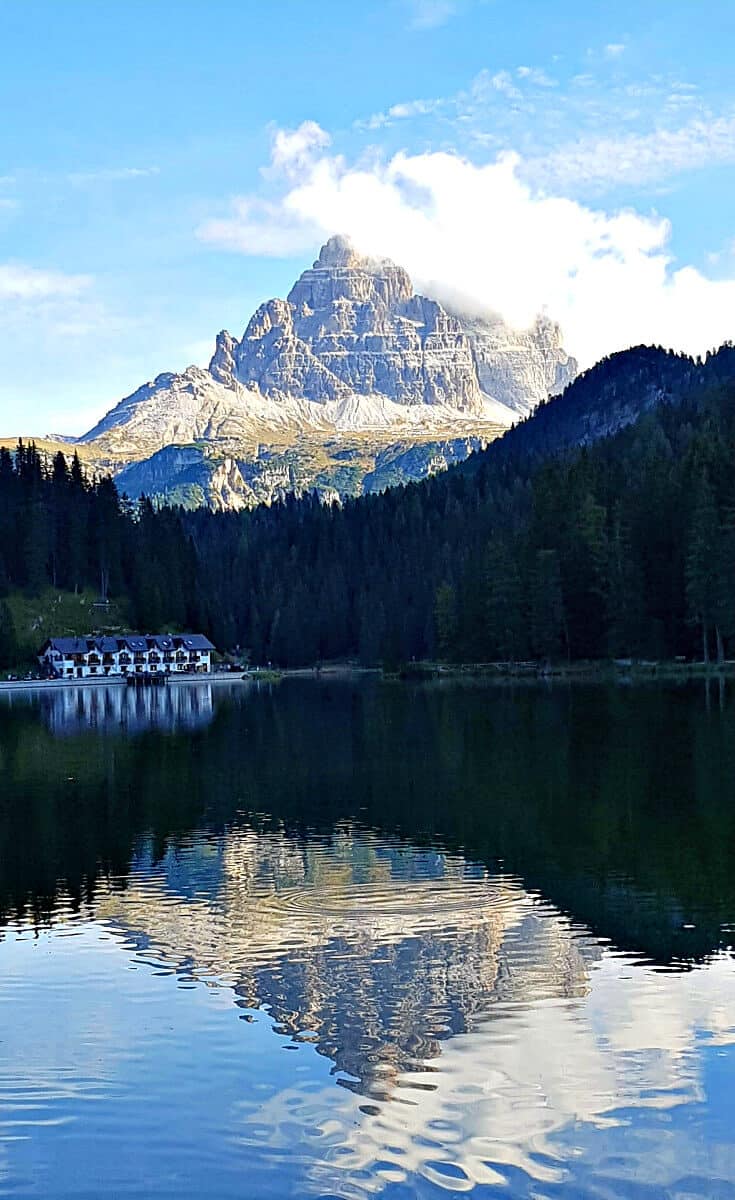 With three finger-like peaks soaring from a moraine surrounded by Alpine fields and lakes, the area is absolutely stunning at sunrise and sunset. Then, it’s possible to see the enrosadira– the traditional Dolomites phenomenon where the mountains take on a deep pink-apricot color.

The Tre Cime are so beautiful, they’re starting to fall victim to mass tourism. Scores of travelers visit the Dolomites every summer in order to snap a picture of these famous peaks. However, most visitors stop at Rifugio Auronzo, the only mountain hut with road access.

Hiking the Tre Cime is the ideal way to get far from the crowds and enjoy nature and silence, and there are many paths to choose from. One great option for day hikers is the Giro delle Tre Cime di Lavaredo, a 6-mile loop route that can be covered in just over three hours. It’s fairly flat and not too hard, with stunning views over the three peaks from several viewpoints.

More hardcore adventurers can also choose one of the many rock climbing or via ferrata routes available around the Tre Cime di Lavaredo. But make sure you take a mountain guide with you, unless you’re a climbing pro. 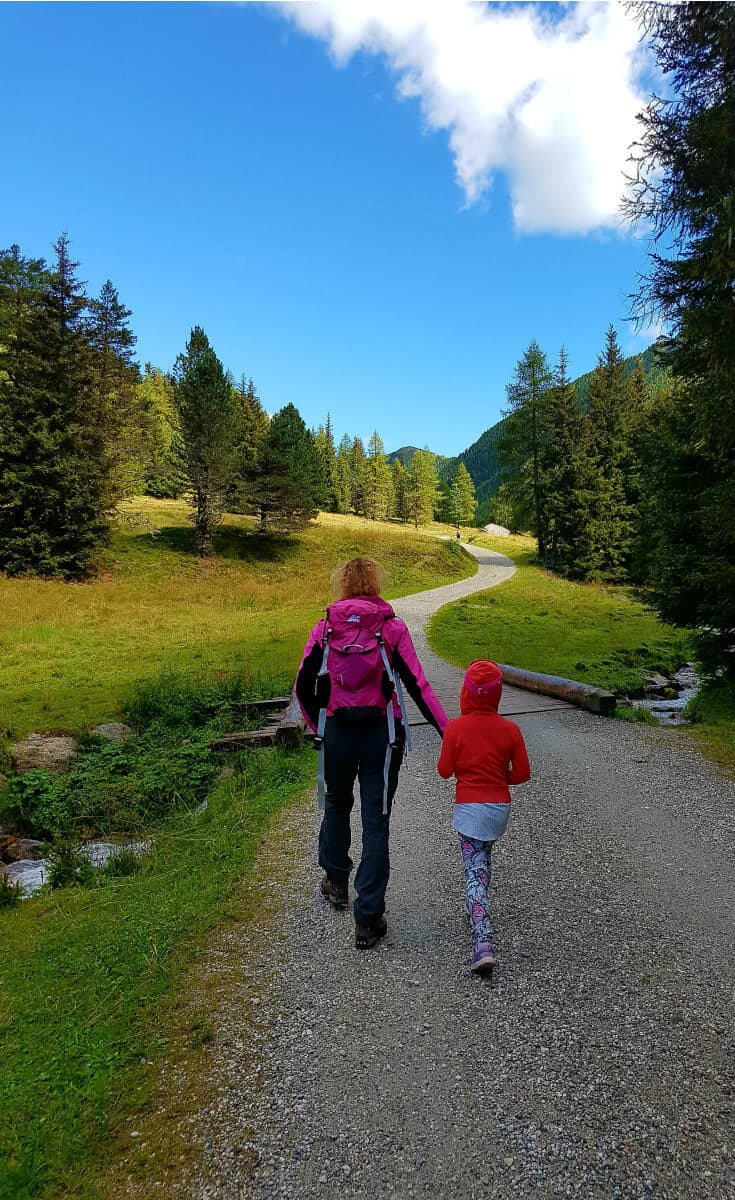 The Marmolada massif includes the highest peak in the Dolomites, Punta Penia, which stands at a towering altitude of 10967 feet above sea level.

One of the peculiarities of the Marmolada is that it’s made of two different types of rock– pale grey limestone (known as Marmolada limestone) on the peaks, and volcanic material at higher altitudes. This diversity was one of the reasons why the Dolomites were added to the UNESCO World Heritage list back in 2009.

The name Marmolada is believed to derive from the ancient Indo-European word marmar, meaning shine. This is in reference to the Marmolada glacier, which is the only one in the Dolomites that still survives today.

The Marmolada is a large massif that measures several kilometers across. As a result, there are hundreds of different hiking paths to go across or reach its peaks. The easiest way by far to reach the summit is taking the cable car: The top station is just below Punta Penia, which can easily be reached on foot from there.

If you want to hike “the Queen of the Dolomites,” there are two easy options. One is a 4-hour hike across picturesque Val Ombretta to the Falier Mountain hut. There’s also an even easier outing that’s ideal for families, going from the cable car’s bottom station across the Serrai di Sottoguda, a two-mile long natural canyon.

Those with an interest in history should definitely pay a visit to the Marmolada Great War Museum. It’s the highest in Europe at 3000 meters, and easy to access by cable car.

Kayaking Near the Dolomites 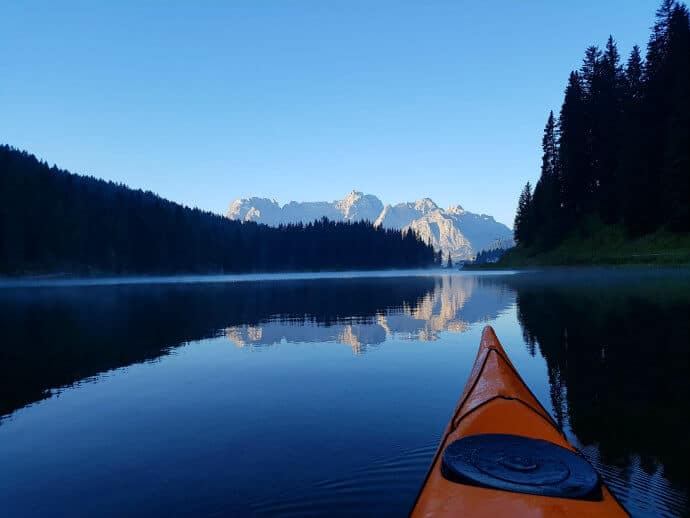 Measuring 35 acres, with 1.6 miles of shoreline, Lake Misurina is the largest lake in the Dolomites region. It’s located relatively close to the Tre Cime di Lavaredo, near Auronzo di Cadore in the Bellore province.

In winter, the lake usually freezes over completely. For this reason, it was chosen as the location for the speed skating competitions during the 1956 Olympics in Cortina. This marked the last time a speed skating event was ever held on natural ice.

In summer, with its graceful turquoise waters surrounded by the jagged Dolomite peaks, Lake Misurina is ideal for a kayaking adventure.

There’s an easy 1.4-mile loop that includes some of the most scenic spots on the lake, and it’s ideal even for novice kayakers. 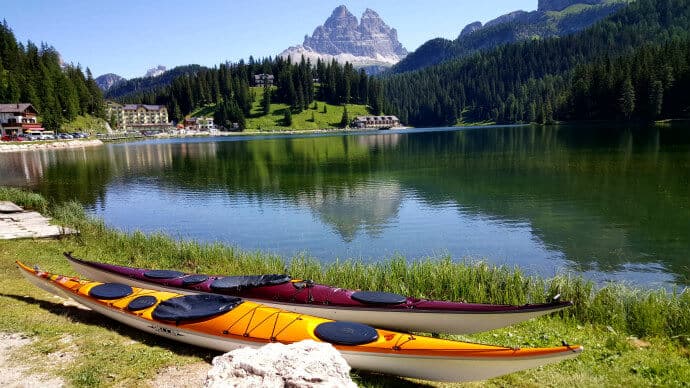 Those looking for some serious kayaking (or other water sports) should head to Lake Garda.  At 142.9 square miles, with 98.4 miles of shoreline and a max depth of 1,135 feet, it’s the largest lake in Northern Italy.

Its location– about halfway between Milan and Venice– makes the lake easy to access before or after hiking the Dolomites.

Lake Garda’s shores are shared between three different regions– Trentino, Lombardy, and Veneto. The Trentino shore is one of the best places for sailing, kitesurfing, and windsurfing, thanks to its regular winds.

For canoeing and kayaking, the Lombardia shore is a better bet. There’s far less wind there, and the lake waters are usually calm. You could opt to kayak near Salò and visit Isola del Garda (which is home to a beautiful palace) or Isola San Biagio (which is perfect if you’re looking for a more secluded getaway).

Another option is kayaking in Sirmione, a town located at the tip of the peninsula halfway across the southern Lombardia shore. The main attraction in Sirmione is the Scaliger Castle, which was built right on the water.

There’s no better way to see the 13th century beauty in all its glory than paddling all around it, then stopping at a secluded beach for a refreshing dip!  –Margherita Ragg; all photos provided by TravelinKayak

This post was sponsored in part by TravelinKayak, which offers numerous different kayaking and hiking trips in Italy & the Mediterranean. But our opinions are our own, and we will never compromise the integrity of our relationship with our readers.