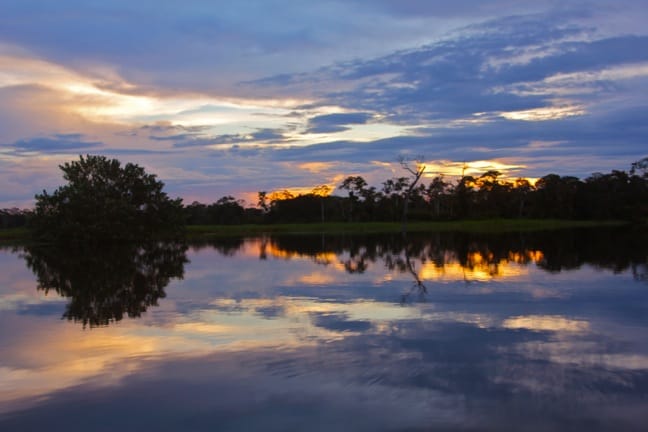 Every evening we were on International Expeditions’ Amazon River Cruise, our ship The Aquamarina would fire up the engines and move a few hours down the mighty river. Eventually she’d stop and we’d tie off right by the riverbank, which was great if you wanted to hear a majestic chorus of tree frogs, crickets and other assorted critters. The problem was that said frogs and crickets did not STAY on the riverbank, and let’s just say the lights by our rooms drew more than their fair share of insects. Still, we were very happy to see these guys by our window the next morning. The frog looks well-fed, does he not?

Back in December (before we knew we’d be traveling with IE), we wrote about our dream of going to the Amazon Rainforest and specifically mentioned how much we wanted to see the Pink Amazon River Dolphin. So, despite being sick as a dog the night before, there was not a snowball’s chance in Hades I was going to miss the show that they and the Grey River Dolphins were putting on. Unfortunately, while the greys loved to frolic and play, flipping and splashing all akimbo, the pinks were a little more shy. Though we saw quite a few over our time in Peru, it was always very brief and only a mere glimpse. Somehow, their elusive nature only made them seem more magical.

When I was growing up, getting sweet cereal was a rare treat, and Fruit Loops were always my favorite. To this day, whenever I see a toucan in the wild I immediately think of Toucan Sam… and get hungry for Fruit Loops. This handsome red-striped toucan was pretty high up in the trees, but we were able to close the distance a bit with our 400mm zoom lens. Still, it was my perfectionist’s dissatisfaction with wildlife photos like this that made me upgrade to a new 500mm zoom after we got back from the Amazon. Can’t wait to try it out in Panama!

For me, the Amazon has always seemed like this amazing ecotourism adventure– something every nature lover should do before they die. So, to actually be there, sitting in a little boat on the Amazon, eating breakfast and chatting away like everything was normal… well, it still blows my mind that it actually happened. Oh, and do you see the guy in the yellow shirt? That’s Charlie, the Aquamarina’s bar manager, and he’s grabbing some water for me. I may screw up and get heat stroke once, but I do learn from my mistakes. I must have drank at least 5-6 bottles of water that morning. Travel tip: Hydration is important in  the jungle, people!

This remarkably colorful fellow is the Northern Caiman Lizard, which is found in swamps and flooded areas throughout northern South America. They spend most of their time in or near the water, hunting snails and various shellfish or branches over water where they can make a hasty escape if needed. That’s precisely where we found this guy, and I loved his skin so much I must have taken several dozen photos. I like this close-up (which was almost too close for comfort) the best.

Truth be told, I’ve seen many of the Amazon wildlife species in other places. What made the area around the Pacaya-Samiria National Reserve so special was how frequently you’d spot animals, and how many there would be at one time. At one point this particular tree had 12 Scarlet Macaws in it, but I chose to focus tightly on this group of five that were all perched close together. For a closer view of two scarlet macaws in flight, check out our initial post on the Peruvian Amazon.

It was so weird to see the Saki Monkeys and Squirrel Monkeys side by side on day two of our Amazon River Cruise. The former looked like something freakish out of the movie Predator, while the latter may be the single most adorable primate I’ve ever seen. Most of them skittered about the trees in search of fruit like junkies after their next fix. But this little beauty too an interest in the sound of our clicking shutters, and stood still long enough for us to snap a few quick portraits.

We might not be quite as crazy for sloths as actress Kristen Bell, but they’ve always been one of my favorite creatures of the rainforest and are great fun to photograph. This one was especially cooperative: When we first spied it, it was so far up in the treetops that I couldn’t get a good angle. Fortunately, he moved down the tree until he was perfectly lit by the rising sun and we snapped this shot right us he presented us with his perfect profile.

Normally today’s itinerary would’ve included a brief hike through the Amazon Rainforest. But since it was high season, the rising waters had flooded the area, so it was difficult to find high ground on which to take a potty break. When we did find a spot, there was a Ribereños Family waiting there in small dugout canoes, hoping to trade with us. This adorable girl held up a freshly caught apple snail, but we eventually gave them some protein bars and our juice from breakfast in exchange for one of the most delicious fruits I’ve ever tasted.

Call me crazy here, but I’m gonna go ahead and wager that ice cream fruit is called that because it looks like vanilla ice cream. The taste, however, was more like a cross between the pulpy feel of a mango with the milky creaminess of a coconut. There was a little seed-like disc inside that kids would suck on until they’d gotten all the flavor out, and our guide called it Amazon candy. It was surprisingly sweet, and delicious!

After some great morning wildlife sightings, during our siesta the boat made its way to the Picaya-Samiria National Reserve Entrance, where we parked the boat for the night. The confluence in front of the entrance was an awesome hotbed of dolphin activity, and we spent quite a bit of time up on the Aquamarina’s top deck shooting video of their antics (coming soon). But soon it was time to head into the reserve in our skiffs, for our very first nighttime excursion.

We ventured deep into the tributaries of the main river, going back into areas so narrow and clogged with lilypads, it took our driver a few minutes to work his way through the vegetation. Along the way we got to see wildlife both big (squirrel monkeys, the distinctively unicorn-like bird aptly called the Horned Screamer) and small (tree frogs and tarantulas), but my favorite was this brilliant red dragonfly, who posed perfectly right next to the boat.

We’ve seen an awful lot of amazing sunsets during our travels, but few that could rival this stunning sunset on the Amazon River. The water was almost as still as glass, and the surrounding landscape made for a great silhouette against the richly-hued light. The colorful shading and the mirrored reflection were, for a moment, absolutely picture perfect, and we were grateful to get this shot just before the sun faded below the horizon.

We weren’t there when the other boat’s naturalist guide grabbed this baby caiman right out of the water, so I’m not sure how they spotted it in the pitch darkness of the river at night. They had huge spotlights to guide the way, but he was so small and off to the side, I don’t think we would have ever noticed him. Here, our guide Johnny tells us about the caiman while one of our fellow passengers feels his can. We were glad to see him, but also glad when they released him back into the water, so that he (and we) could get a restful night’s sleep after a long day…  –by Bret Love, photos by Bret Love & Mary Gabbett

Day 4 Photo Gallery:  Up Close & Personal with one of the Amazon’s Most Endangered Species

Day 6 Photo Gallery:   Out Of The Village & Into The Jungle