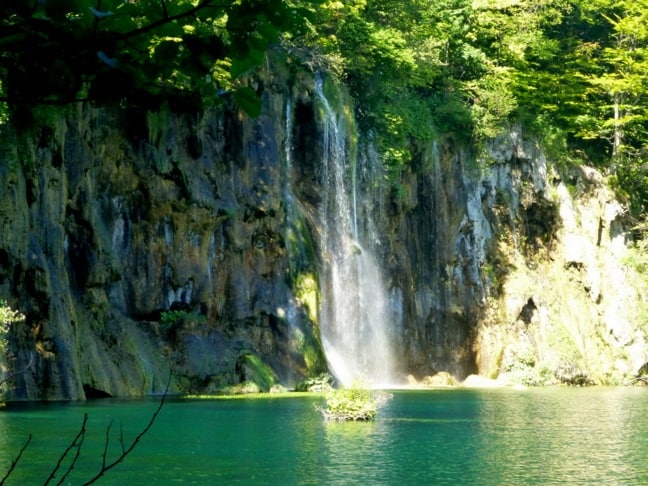 For our late summer vacation we planned a trip to Europe, with the Czech Republic and Croatia as two of the biggest highlights.

Croatia has always been on my World Travel Bucket List, but my knowledge and interest in the country was primarily limited to the gorgeous beaches and the beautiful city of Dubrovnik.

But, after a quick internet search on things to do in Croatia, I learned about what is undoubtedly the country’s most stunning place (and certainly its most visited), Plitvice Lakes National Park.

Located in the mountainous central part of Croatia, Plitvice Lakes National Park (the oldest of southeast Europe’s national parks) was founded in 1949 and covers an astonishing 73,350 acres.

With its extensive maze of lakes and waterfalls that gleam in brilliant shades of emerald green and sapphire blue, Plitvice can easily be described as the jewel of Croatia, attracting more than 1,000,000 visitors each year. 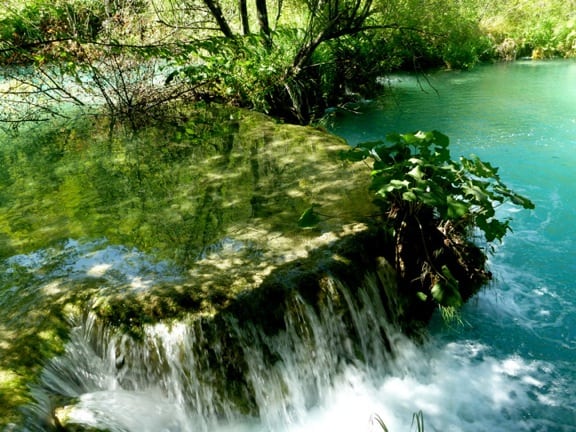 GETTING TO PLITVICE LAKES

We drove our rental car from the rocky coast of the Adriatic Sea and wound our way through the countryside, which quickly changed to mountains.

The two-lane highway made for a long road trip and, as we neared the park, the RV and car traffic increased exponentially, partially due to extensive road construction.

The Plitvice Lakes National Park visitor’s center lay just three miles beyond the standstill traffic, but it took us over an hour to get there.

Once we found a parking spot between two trees in the forest, we walked back to the visitor’s center, which was teeming with people.

We spoke to a helpful park employee, who gave us information about campgrounds and directed us to the ticket booth.

The cost of a one-day adult ticket is 110 Kuna, or about 19 USD, payable only in Kuna or by credit card. We purchased tickets for the following day and made our way to the campground. 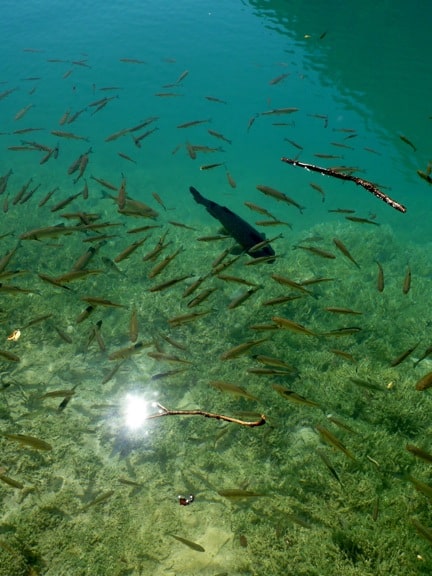 Each combines various sections of the park and vary according to length and required physical ability, with buses and electric boats supplementing the trails that crisscross the park.

We chose Route H, a 4- to 6-hour hike which hit most of the main waterfalls and lakes. We arrived shortly after the park’s 8am opening time and made our way to the bus stop to begin our adventures.

The bus stop was a mob scene: With buses running every 20 minutes or so, and with no discernable queue to be found, the park’s many visitors were all simply milling about in frustration.

When the buses did arrive, a crush of people pushed aboard, claimed all the seats, and then packed the aisles. It wasn’t until the buses were full that a park employee finally approached and loudly declared that standing in the aisles was not permitted.

Frustrated people suddenly became angry people as they filed back off the bus. We waited another 20 minutes, and were able to squeeze onto the next bus for the ten 10-minute ride up the hill.

Once we arrived, we let our fellow bus passengers immediately flood the trail, while we visited the small cafe at the trailhead for a coffee.

A few minutes later, we started down the trail, which consisted of dirt paths mixed with boardwalks. We soon walked over the first of many ponds and lakes filled with impossibly crystal clear water. The sight was so beautiful, it took my breath away.

Unfortunately, those breathtaking views were soon obliterated by overwhelming crowds of people lining the narrow pathways.

Given the fact that an amazing photo opportunity seemingly waited around every corner, the problem was compounded when those in front of us stopped in an effort to frame the perfect shot.

I was also surprised by the numbers of people working their way up the trail toward the trailhead, where the bus had dropped us off. Two-way traffic on the trail literally brought everything to a standstill.

Although we had to squeeze through the throngs of hundreds to find our way, the hike down the mountain, past a multitude of lakes and waterfalls, was gorgeous. Waterfowl dotted the crystalline surfaces, and the sun glinted brightly at every angle, highlighting the fish that lurked just beneath.

We shouldered our way through the crowds in anticipation of boarding one of the boats and exploring a different part of the park.

READ MORE: What Is Ecotourism? (The History & Principles of Responsible Travel) 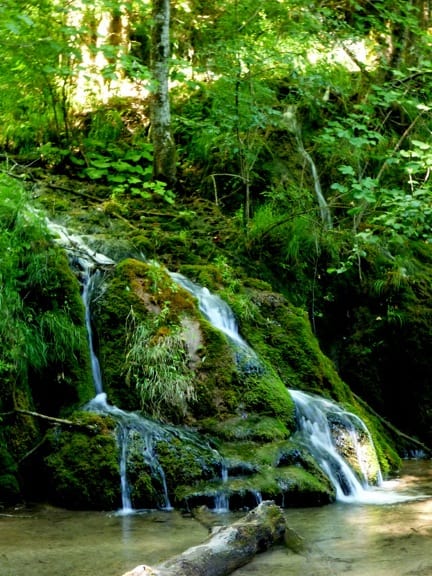 We made our way across the lake and disembarked with renewed spirits, as the crowds on the trails there initially didn’t seem quite so heavy. Unfortunately, you can’t judge a book by its cover.

This part of the park featured numerous rock outcroppings and overhangs, which further narrowed the trails as we hiked.

The views here were even more stunning, but that also meant that more and more people were stopping in the middle of the trail to take photos.

We ultimately decided to make our way back towards the park entrance, which meant that we once again boarded one of the Plitvice Lakes National Park boats to make the trip. But we clearly weren’t the only ones with that brilliant idea.

Even with a capacity of 100 passengers per vessel, there were so few boats making the run that we waited for over an hour to board, and the line behind us just kept growing.

Eventually we made it back to our car, but waited further in the inevitable traffic jam on the highway. 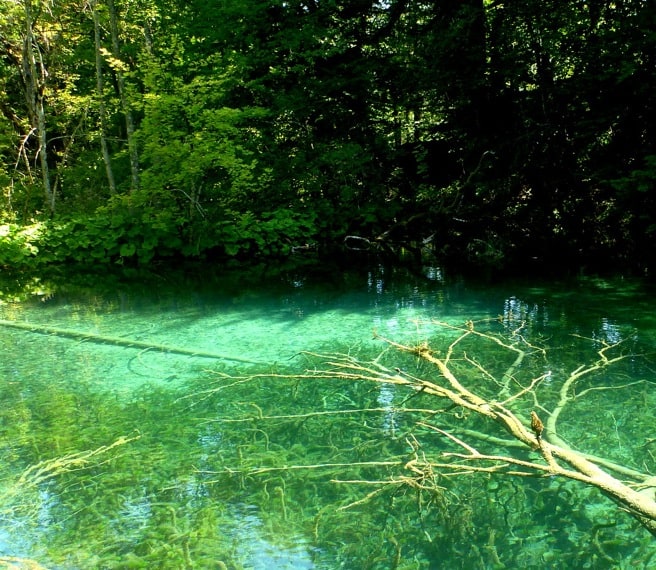 I’m no stranger to crowded national parks. I’ve been to Yellowstone National Park on holiday weekends, which is enough to test any traveler’s nerves.

Wherever these parks are in the world, they are made to be enjoyed by the masses. So I can’t fault the throngs of other people who were there to appreciate the same natural wonders that I do. Perhaps I was simply naive to think that the situation would be different in Croatia.

Regardless, the incredible scenery of Plitvice Lakes National Park is in no way overrated. It’s simply stunning in its beauty.

Just be prepared to catch that beauty while peering over the shoulders of the multitudes in front of you, and make sure you have a cold beer waiting at the end of the day. You’ll need it!  –text & photos by Cate Brubaker 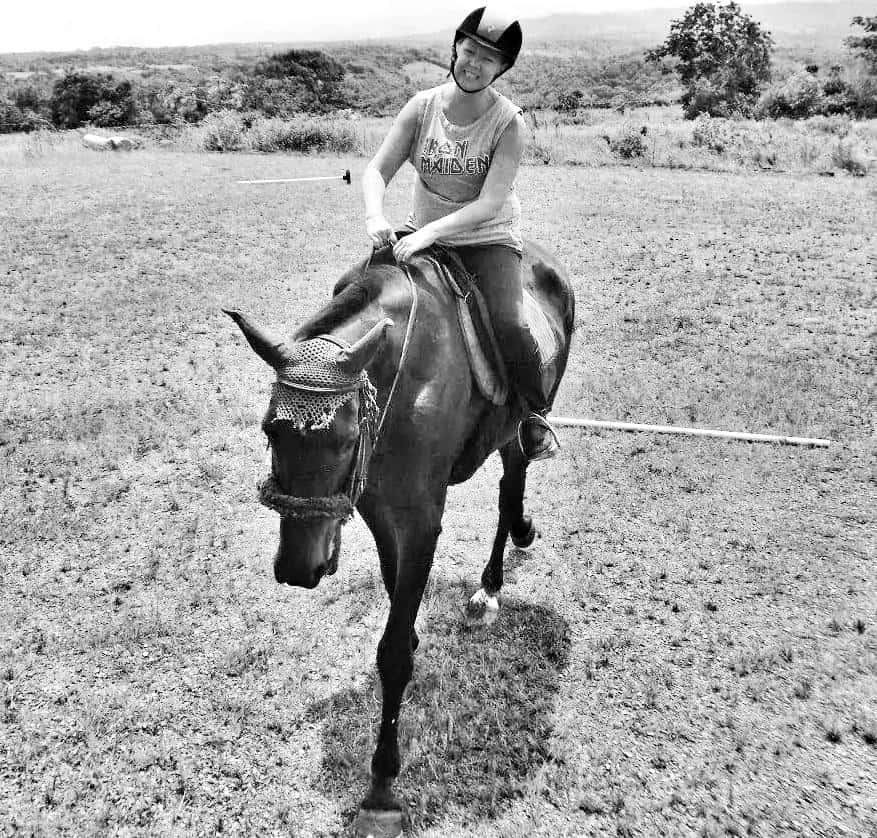 Cate Brubaker is the blogger behind  The Life Nomadic. Cate and her husband Will relocated to Abu Dhabi, UAE many years ago. But they ultimately traded in their long weekend getaways (and the occasional week-long vacation) to return to their nomadic lifestyle.