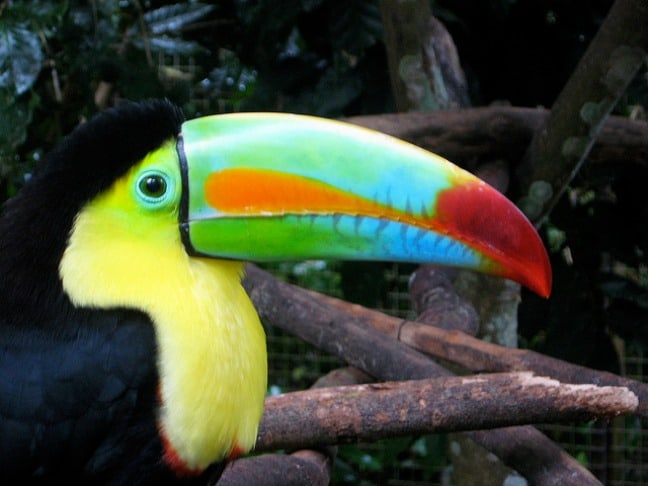 The Park Of Living Jewels

In the city of Copán, Honduras, there are secret places: ancient Mayan ruins that rise on hills and grassy valleys of red clay and earth, one of the most well-preserved archeological sites in the world. But Copan is famous for more than its treasures from the past. It is also one of few places in Central America which showcases a park of living jewels.

The jewels are not of the cut stone variety. They are, instead, birds. A dizzying array of extravagant splendor, more than 330 varieties of wild native birds live on the edge of the Mayan ruins, in a cross between sanctuary and tourist park called Macaw Mountain.

At this part nature reserve for endangered and rescued birds, and part eco-friendly coffee plantation, visitors can walk among trails of lush plantings of tropical flowers and coffee plants heavily laden with red coffee berries. Rising above and in between the foliage of this green oasis are birds of every color and size, so close that one doesn’t feel like a guest so much as a bird, too.

Inspired by the words of John Muir, “We only love what we know and we only preserve what we love,” Macaw Mountain was born out of both a need for a habitat for these birds and an education for the community.

As logging has increased and rainforest habitats are encroached upon, birds are forced more and more to share space with people. People often make wild birds into pets, and then cannot care for them adequately, either because of lack of knowledge or the fact that many birds outlive their owners (some species can live up to one hundred years or more in captivity).

Macaw Mountain is more than a home for these rescued birds. It is also a training center and an example of how an organization that works to help animals can also help people, by allowing them to bring unwanted birds to the sanctuary anytime and involving the community in education about their habitat.

And that’s not the only innovation in this bird reserve. Most of the birds are not kept in cages during the day. Instead they fly freely or are kept out in open, natural spaces.

It is a curious thing to walk amongst a rainforest of gargantuan leaves and old hardwood forest, seeing rainbow-plumed birds at eye level, spending the afternoon on their perches.

Many of the birds that arrive to the park need special care and diets, and have disorders such as feather plucking and picking. Caregivers are locals who are trained to take care of the birds, and spend their days nurturing them and giving them safe haven to be as wild as they can be.

Macaw Mountain is unusual in another way, too: they rehabilitate some birds and release them into protected environments in the wild.

One of the most successful programs they run is the Scarlet Macaw Project, which is partnered with Wild Parrot Trust and the Copán Association. Scarlet Macaws are the national bird of Honduras and, because of this and their plumage, they are highly prized, both as pets and as collector’s items.

Macaw Mountain has created a special area for these birds in an outdoor aviary almost two stories tall, and the size of small field. The macaws live here and recover in a controlled environment, and then are released into the Copán Archaeological site. There, they live out their days freely amongst the Maya– a timeless bond between a culture and bird that cannot be broken.

I arrived at Macaw Mountain on a morning that poured rain: warm jungle water that spilled over the pink ginger blooms that lined the walkways.

Despite the rain, it was inviting inside the park, with red coffee berries and birds awake in cacophony. The on-site Café Miramundo welcomed me with a view that looked out on greenery so dense I could not see the sky.

Walking through the park itself was thrilling, because I’d never been so near birds before.

But many of the birds kept their distance, like the Toucanets– small birds from the toucan family, with enormous bills and, according to their keepers, short tempers.

The Emerald Toucanet was stunning, its green feathers almost invisible against the backdrop of leaves.

The Scarlet Macaw aviary was huge, but did not look like a cage, instead blending in with the rainforest. Visitors are allowed inside.

When it was my turn, I was told to stay on the path and not get too near the birds, because Macaw Mountain respects their wildness.

I walked slowly as the Scarlet Macaws flew in red blurred streaks on either side of me. Listening to their screeches and arguments, I felt privy to a part of nature I would never get to see anywhere else.

The rest of the grounds were filled with outdoor cages and free environments, where birds that had been pets or were disabled welcomed me with curious expressions, heads cocked to one side.

Flirting with the visitors, craning their necks back and forth, running up and down their perches, they occasionally flew onto my head and shoulders.

The Collared Aracari, a tiny black bird with bits of saffron yellow and stripes of red, examined my face in minute detail, flying from his breakfast to a perch near my nose.

Parrots and toucans of all colors were everywhere in the park, often in pairs, alongside lovebirds and parakeets.

Some were shaded with feathers black, orange and blue, tipped with opal iridescence. Others were creamy green avocado, with yellow eyes and voices that chattered constantly.

The friendliest birds didn’t want me leave, and would call me back repeatedly with song and dance.

In the center of the park there were birds that were still shell-shocked from neglect or abuse. They stood trembling on perches and kept at a distance.

But one bird, a blue and yellow feathered Macaw, was different from the rest. As I approached him, he stood tall and proud, despite his white plastic collar to keep him from picking at himself. He wore that collar like the regal king he was, his remaining feathers of royal blue and gold.

Macaw Mountain is a highlight experience of any trip to Honduras, and the town of Copán is worthy of a trip in itself. But not just for the ruins: The real treasure of Copán are these living jewels. –text & photos by Amy Gigi Alexander

Macaw Mountain is located in Western Honduras, just outside the town of Copan. It is open every day between 9 am and 5 pm, no matter the weather. The cost of entrance is USD ten dollars, and that entrance fee is good for three days. Tickets are available at the park entrance also through tourist operators. The website is

Amy Gigi Alexander is a writer, traveler and explorer. She is passionate about empowering and educating people to be citizens of the world, to understand the diversity of the cultures with which they live, and to find the good when they travel.

She’s just finishing two books: one about living in Calcutta, India, and the other about her experiences with the Ngabe people of Panama. Her website is AmyGigiAlexander.com, and you can follow her on Facebook and Twitter.

GO GREEN TIP #93: How to Attract Hummingbirds To Your Garden