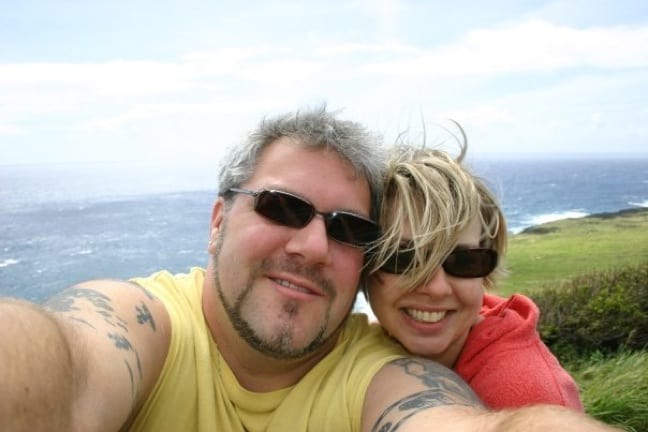 It was the week after Thanksgiving, I’d just broken up with a girl I was really into because she wasn’t ready for a commitment, and I was desperate for something, ANYTHING that would take my mind off my troubles.

My friend Stef suggested I go to a Christmas party her Unitarian Church’s 20s-30s social group  was having at her friend Mary’s house, even though Stef wouldn’t be there and I’d basically know no one.

I reached out to Mary on Facebook at Stef’s urging, and wound up getting invited to the party. Mary thought I was flirting with her in my initial message, but I was honestly too depressed to flirt with anyone. Still, I went to the party and Mary was both beautiful and  incredibly welcoming, making me feel right at home.

We played a fun party game in which she taped celebrity names to everyone’s back, and you had to go around asking people questions in an attempt to guess who you were. It was perfect for bringing me out of my shell.

Things got interesting when one woman, whom I vaguely knew from a previous get-together at Stef’s house, got extremely drunk and started flirting with me, dragging me around and introducing me to people as “my Facebook boyfriend.”

I noticed a look of hurt on Mary’s face when she heard this, and my curiosity was piqued when she replied, “But I thought you were MY Facebook boyfriend!” Clearly, there were worse positions for a guy to be in….

I soon found myself in one: The drunk girl led me around by the hand, asking me to critique the artwork in Mary’s house, and she eventually led me upstairs, to Mary’s bedroom.

Being sober, I was a perfect gentleman, but she was very flirtatious, folding herself in my arms in front of a mirror and asking, “Don’t we look GOOD together?” I was much more concerned with keeping her from falling and hurting herself.

Next thing I knew, I heard someone calling up from below: “Hellooo?!” I immediately thought, “Oh, crap!” knowing precisely what the perception of a stranger being upstairs alone with a drunk girl might be.

We went downstairs to find everyone had left, and Mary looked FURIOUS. I apologized profusely, offered to take the drunk woman home, but I knew there was nothing I could do to redeem myself in Mary’s eyes, so I didn’t even try.

The next day I sent Mary a Facebook message explaining what had happened, apologizing profusely once again, and offering to take her out to dinner to make it up to her.

She wrote back a scathing email, explaining that she’d recently started dating, two months after getting separated, and was looking for someone VERY different from me– someone with a stable professional career, without kids, without facial hair and tattoos, shorter… I laughed, and responded bluntly: “It’s just dinner. I’m not asking you to marry me!” She replied back almost immediately, “I guess dinner would be okay.”

Two weeks later, we were inseparable.

Our first date (which she insisted was NOT a date) went so well that she wound up pouring her heart out about her failed marriage, hopes and dreams for over two hours, our sushi dinner lasting so long that we had to cancel the planned trip to see Lake Lanier Islands’ Magical Nights of Lights.

Instead, we agreed to go there the next Tuesday, just a few days before Christmas. As we drove through my favorite holiday attraction, we crossed a bridge lined with lights just as the sun set over the lake, and it was there that Mary kissed me for the first time (yes, she made the first move).

Not long after, we were making out in front of the sweet baby Jesus at the live nativity, and that was pretty much that.

We were falling madly in love. We were together on Christmas night. We went to a ridiculously huge New Year’s Eve party in downtown Atlanta, talking into the wee hours of the morning and going to brunch, where Mary (a Psychology major who specialized in personality assessments for major corporations’ HR departments) gave me an astonishingly accurate breakdown of who I was as a human being and what made me tick.

She was going through a painful divorce, and I (having been through one of my own 5 years previous) was able to help her through it. In February, I threw her a big surprise birthday party, with friends coming from as far away as New York City to make her day extra special.

But I still think it was our trip to the Big Island of Hawaii, just 3 months after we’d met, that permanently sealed the deal. An avid world traveler in college, Mary had become much less adventurous during her marriage. Though I traveled a decent amount for work, I turned down numerous trips because I hated traveling alone.

So when we each realized how much the other person loved to travel, we immediately bonded over sharing stories from our trips. When a friend who worked in PR for the Big Island came to Atlanta and asked Mary and I to join her for dinner, we gladly accepted, and it was there that we were invited on our first press trip as a couple.

You learn an awful lot about a person when you travel together, spending every waking moment with each other.Mary and I took 3 flights (totaling over 13 hours) to get from Atlanta to Hawaii, and in a week we saw nearly every inch of that island.

We narrowly avoided hitting a wild boar with our rental car in Holualoa, conquered Mary’s fears of water by snorkeling in Kealakekua Bay, took a helicopter ride over Volcanoes National Park, took a nausea-inducing boat ride to see the lava meet the ocean, spent luxurious time in a private paradise called Shangri-La, and got lomilomi massages and swam with sea turtles at the Fairmont Orchid Hotel. Through it all, we never argued, we played like children, and we fell deeper and deeper and deeper…

For better, and for worse…

Though our early days were certainly romantic, this was no fairy tale romance.

My beloved grandmother passed away right around the time of our Hawaii trip, and I was heartbroken. Mary’s divorce was painful as hell. Soon after it was finalized, her mom had some health issues and spent time in the hospital.

A month or two after that, a massive tree fell on her house. During the cleanup, a man tried to sell the tree crew a GPS that it turned out he had stolen from their truck: when the police were called, he turned out to be a convicted rapist. Around Christmas, Mary’s company (which she’d been with for 10 years) was bought out and she was laid off.

In part to save money and in part to get her out of a neighborhood increasingly infested with crime, we moved in together in January 2010.

Though times were tough, we took solace in our travels, with Mary (who had been been an entrepreneur’s right-hand man for 10 years) helping to manage my busy freelance career. We got incredible opportunities to travel to Curacao, the Dominican Republic and Sanibel Island, and began to talk about my 10-year dream to start my own publication dedicated to ecotourism.

I remember the fateful conversation that gave birth to Green Global Travel like it was yesterday. We were sitting at the pool bar of the Mwamba Lodge in Tortuguero, Costa Rica, taking shelter from a torrential downpour and talking about what we wanted to do with our lives.

Mary had been unemployed for over 6 months and was bummed at the job prospects she’d been offered, all of which required lots of her time and effort for surprisingly little pay. I’d been self-employed for 15 years, and couldn’t imagine having to work for someone else.

Suddenly, in discussing different ways she could generate her own income, we stumbled onto the idea of launching our own travel and culture website, allowing us to pursue our primary passions in a way that would financially benefit us in the long-run.

Less than 3 weeks later, we’d assembled a team of writers, hired a graphic designer, launched our Facebook page, and began the long, arduous journey to create the ever-evolving site you know (and hopefully love) today.

Green Global Travel may not be perfect– not by a long shot– but I can assure you without a doubt that Mary is the perfect partner to help me run it. That trip we took to Hawaii more than 3 years ago showed us that, when we worked together as a team, we could conquer any obstacle or challenge we faced.

And now, as we pour every ounce of our passion and energy and love and dreams for our family into this site on a daily basis, I know that, in the grand scheme of things, we’re just getting started and ANYTHING is possible. Thanks for being a part of our amazing journey!  –Bret Love

Our Happy Place- A Celebration of Stay-cations