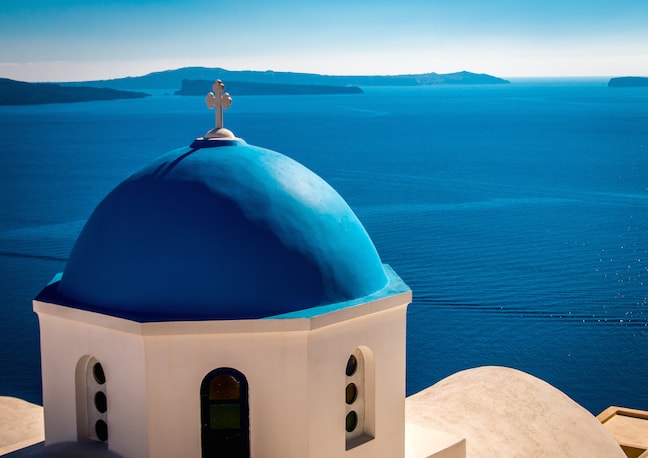 Don’t let the title fool you: Though you’ll get the 20 stunning Santorini photos you came for, this is really a tale of two cities.

It’s the story of how you can have the best of times and the worst of times in the same destination.

It’s a story about how what we experience when we travel has as much to do with our expectation and context as it does with destination research and vacation planning.

READ MORE: The Best Places to Visit in Greece (in 40 Fantastic Photos)

For 20 years Mary had harbored romantic fantasies of island-hopping the classic Greece you typically see in travel guidebooks, or on Rick Steves’ Europe.

The island of Santorini, with its stunning coastline and striking blue-and-white domed churches, was the epitome of her idyllic aspirations.

So when TBEX invited us to speak about Branding For Bloggers at their conference in Athens, I made it my mission to make Mary’s dream come true.

Lo and behold, through a series of fortuitous circumstances, we were actually able to visit Santorini twice during our 16 days in Greece.

READ MORE: The Most Beautiful Islands in the World (World Travel Bucket List)

Our first visit to Santorini began on wobbly footing (or should I say wobbly wheels).

The weather that day was incredibly gorgeous, with picture perfect blue skies, a cool breeze coming in off the shore, and nary a cloud in the sky.

Unfortunately the winds were scheduled to get rougher throughout the day, preventing our 40-passenger sailing vessel, The Galileo, from crossing the Mediterranean to Mykonos.

There, we had originally intended to catch a flight back to Athens for the start of TBEX the next day.

But due to the impending bad weather, we had to take our luggage with us as we explored the town of Fira, and then catch a flight out later that night.

We must have looked hilarious to passers-by, awkwardly rolling our carry-ons and laptop bags along the cobblestone streets of Santorini’s capitol city, Fira.

It was definitely a little embarrassing, as the persistent clickety-clacking of wheels marked our every step.

As we began to make our way through the town, a shepherd passed by, leading a long line of donkeys to start their day of work.

The animals voiced their displeasure with occasional braying and an expulsion of excrement that suddenly gave our movements through the city a Frogger-like need for nimbleness.

But eventually they made their way 1,312 feet down the winding path to the bottom of the volcanic caldera atop which the town of Fira is perched.

There, they would wait to transport passengers disembarking from the steady stream of massive cruise ships that visit Santorini.

Several of them hovered in the harbor below, like aquatic buzzards waiting for their turn to feast on a kill. Mary and I began to move faster, eager to avoid the tourist throngs.

Sensing their impending invasion, we hastily began making our way through Fira.

Unfortunately, we realized that our luggage (which was loaded for 16 days of travel) did not bode well for a casual stroll through a hilltop town spotted with stairs.

We quickly developed a routine: One of us stayed with the luggage while the other took the camera to snatch photos of the spectacular scenery all around us.

We passed by numerous examples of Santorini’s iconic domed churches, with their signature bells and arches.

We passed colorful cafes wafting aromatic scents that made our mouths water and our stomachs grumble.

There were impossibly picturesque ocean views nearly everywhere you turned.

After trying to drag our weighty luggage up a long flight of stairs, we gradually realized it just wasn’t worth it.

It wasn’t even noon yet on what promised to be a long day in Santorini, and we were already sweaty and exhausted from our exertion.

So instead we gradually rolled our way towards the cathedral where we were scheduled to meet the rest of our group, then found a quiet little cafe with incredible views of the coastline.

We ordered ourselves some delicious sandwiches and a huge glass of Greek wine, and simply sat and watched the world pass by.

Doing nothing felt both divine and gloriously self-indulgent.

A few hours later, a tour bus took our group across the island to the village of Oia, whose neoclassical white lime-painted buildings are the epitome of Cycladian Greek architecture.

Fortunately, this time we were able to leave our luggage on the bus. Unfortunately, we only had an hour to explore before catching a ride to the airport.

With such limited time, Mary and I tried to lower our expectations and improvised a plan: No shopping, no stopping, no scenic patio drinking.

Instead, we hastily wound our way through Oia’s narrow alleyways in search of  “The Shot”– that iconic view of Santorini’s coastline that you see on postcards and on posters in practically every Greek restaurant in the world.

We knew precisely what we were looking for, and we knew it had to be on the left-hand side of the main path (i.e. the coastal side), so it shouldn’t be that difficult to find, right?

READ MORE: Ancestors & Expectations at the Acropolis of Athens

WRONG. There were blue roofs practically everywhere we looked, but these were not the blue roofs we were looking for.

We walked the entire length of Oia, but every path we found leading down the hill seemed to lead to a closed gate or a dead end.

To make matters worse, the cruise ship passengers I mentioned were now starting to descend upon Oia in droves.

It seemed as if all of the alleyways cluttered with slow-moving tourists who seemed to have even less clue where they were going than we did.

READ MORE: What is Ecotourism? History & Principles of Responsible Travel

With less than 10 minutes left before we had to meet our driver, I could see Mary’s face crumpling with disappointment, her eyes welling up with tears.

“This was not my fantasy,” she confessed in frustration, and I felt uncharacteristically powerless to do anything about it.

We’d stopped to ask for directions several times, but nobody in Oia seemed to know the spot we were looking for.

Holding Mary tightly and trying to console her, I suggested that we call it a day.

As we stopped to take a few photos of the church pictured above, a young lady walked up the alleyway towards us with a huge smile on her face.

Sensing our confusion, she said, “You have got to check out the view down there– it’s INCREDIBLE!!”

I practically sprinted down the steps, past a false dead end, and around the corner to see one of the most impressive vistas I’ve ever been privileged to witness.

There was no time to savor the moment, so we hurriedly snapped a few photos and left, heaving a huge sigh of relief.

READ MORE: 20 Pictures of Sunsets Around the World

A week later, on our post-TBEX press trip to Santorini, we were determined not to make the same mistake. Especially since we were arriving just before the sun began its descent.

Before our bus arrived in Oia, I turned to our blogger friends (including Angie of Angie Away, Chris & Tawny of Captain & Clark, Kerwin of Cruisin Altitude, and Anton of Our Awesome Planet) and said, “Stick with us: We know the BEST place to see the sunset in Santorini!”

We were off like rockets the second the bus stopped, running up stairs, down alleyways, and around the corner to see the remarkable sight pictured above.

It couldn’t have been more different from our first Santorini experience.

We knew precisely where we were going, there were virtually no other tourists around, and the sun was perfectly poised above the horizon, bathing the entire town of Oia in its radiant orange glow.

The only thing brighter were the smiles on the faces of everyone in our little group.

Several of us had brought wine along for a toast at sunset, but of course nobody thought to bring a bottle opener.

Captain Christopher Staudinger drew cheers all around as he demonstrated how to open a wine bottle the old fashioned way. He put it inside his boot and repeatedly slamming the heel against a wall, each time creating a loud “THWACK” that reverberated throughout the tiny village.

The laughs continued as Hai and Jessica asked, with a hint of embarassment, if we’d be willing to record a brief video for their sponsor, PoleStar Sauce.

Apparently the Notes of Nomad duo goes all around the world recording videos of friends they meet along the way doing a strange little pose with their hands and hips as they say “Sauce ne!”

It was hilariously ridiculous, so of course we did it about 10 times in a row, everyone laughing as the wine took effect.

After the sun eventually set, we all made our way back to PitoGyros, a tiny little hole-in-the-wall restaurant that had some of the best gyros we sampled in Greece (which is saying a lot, because we ate A LOT).

We all sat together on their outdoor patio in a little group, wolfing them down greedily, talking about what an amazing evening we’d had as we licked the succulent juices from our fingers.

In the end, the reality of our Santorini experience was nothing like Mary’s fantasy. It wasn’t especially romantic or intimate, and we were surrounded by people we’d just met a few days before.

But those few hours we spent in Oia ultimately wound up being one of our favorite memories from our 16 days in Greece– not in spite of those people, but because of them.

The lesson we learned is that sometimes in travel it’s best to just let go of any expectations, open yourself up to the possibilities, and embrace the unpredictability of exploration.

Our trip was sponsored by Variety Cruises and Adventure Life. But we will never compromise our obligation to our readers. Our opinions remain our own.

ITALY: Singing for the Pope in the Vatican