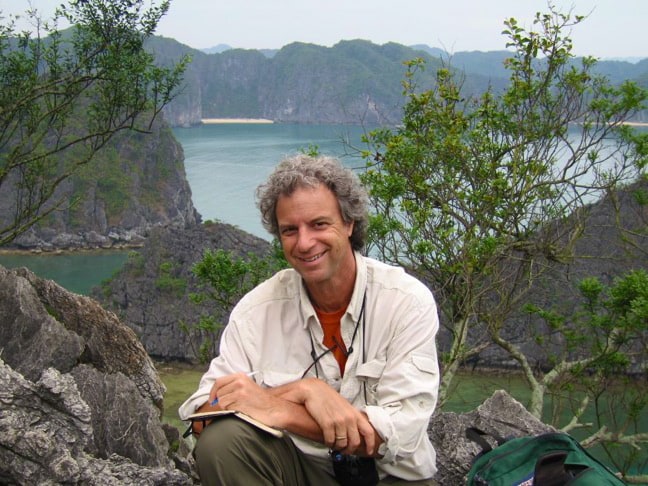 I first knew of Jeff Greenwald as the founder of Ethical Traveler, which annually publishes a list of the World’s Top 10 Ethical Travel Destinations. Ideologically, his organization and ours are perfectly aligned.

It wasn’t until fairly recently that we learned that Greenwald, a successful travel writer for outlets such as the San Francisco Chronicle and Wired magazine, also happened to be the world’s first travel blogger.

As documented in his 1996 book, The Size of the World, Greenwald was hired by Global Network Navigator to post travel stories to the World Wide Web during his 1993-1994 overland journey around the world. It was the first time the then-new Internet technology had been used for travel blogging.

Greenwald, who still blogs on occasion, has gone on to become a successful author (his sixth book, Snake Lake, was published in 2010) and performer, touring with his one-man show “Strange Travel Suggestions.” He was kind enough to spend more than an hour chatting with us about everything from that very first travel blog post in January of 1994 to his views on travel blogging today.

READ MORE: How to Start a Travel Blog (& Build a Successful Blogging Business)

How did you get into travel writing, and what attracted you to the field?

I never set out to be a travel writer. In 1979, I was working as a sculptor. I went to Europe to sculpt marble for 3 months. Instead I met a beautiful young woman in Greece who was going to a place I’d never heard of– Nepal. I ended up living there with her for a few months.

Then we went to Thailand, right when the Cambodian civil war started. We were hired as volunteers at the first refugee camp on the Thai-Cambodian border, called Khao-I-Dang.

When I got back to the States, I wrote a story about my experience at the camps. The Santa Barbara News published the story, and called me the following week to ask if I would be their Cultural Features Editor. That’s how my career as a writer started.

In 1983, the Rotary Foundation gave me a fellowship to return to Katmandu to work on a book, because I’d been so completely smitten with the country. I lived there over a year and wrote my first book, Mr. Raja’s Neighborhood. While I was there, I began doing stories for other magazines. Four of my six books are set in Nepal, and it continues to have an enormous artistic, literary, and spiritual impact on my life and career.

In 1993, you said that you didn’t feel like a real traveler. Can you explain?

I’d been to all of these exotic countries as a travel journalist, but there was this sense that I hadn’t really gone anywhere. I felt like I’d cheated. I’d arrive in a country like Morocco, Nepal or Peru, but why did I deserve to be there?

I’d simply set foot on an airplane, sat down and had cocktails for six hours, and there I was. I became disgusted with myself, acting like I was this great world explorer when all I’d really done was to sit on an airplane.

So, for my 40th birthday, I resolved to do something that seemed really crazy– going around the world without taking any airplanes. I pitched it as a book proposal, and I set off in late December of 1993. It took 9 months, through 27 countries, covering more than 30,000 miles.

It was a complete transformation in how I saw the world. If you don’t take an airplane from California to Tangiers, it takes weeks to get there. The characters, scenarios, and problems you encounter along the way, every one of them is a story.

How did you connect with Global Network Navigator, publisher of the world’s first travel blog?

GNN, which had one of the first websites ever posted on the Internet, approached me in 1993 and asked if I’d like to write stories from the road that would appear live on their “Travelers’ Center” site.

They had a map of the world, and every time I wrote a story they’d put a dot on the city where I wrote it: You could click on that dot and the story would come up. They contacted Hewlett Packard and got me a small portable computer called an Omni Book 300, taught me how to upload stories through modems I’d find at various places, and sent me on my way.

Over the next nine months, I sent back 19 dispatches ranging from 150 to 2,000 words. I posted stories from Tibet, Morocco, Istanbul, the middle of the Atlantic Ocean…  I didn’t know at the time that no one had ever done this before. I wasn’t trying to pioneer anything, or break any records. I was just writing stories and sending them back, with a tremendous amount of energy and time spent waiting for the stories to upload.

READ MORE: Andrew McCarthy on Travel Writing, Fear & the Journey of the Soul

Was there any difference in the way you approached those early blogs as a writer from the work you’d done for books and magazines?

Yes, they were much closer to conversational journal entries than they were to formal articles. Really, they were a conversation between me and my best friend– my Omni Book, which became my therapist and my companion. I had it with me everywhere. It weighed only 2.9 lbs, and every day I would write for an hour or two. Those dispatches were my most personal, unguarded thoughts about the experiences I was having.

Did you ever imagine that Travel Blogging would get as big as it has today?

No, it never occurred to me that people would take so much time off from the experience of being in the moment in their travels unless they had to. I did it because I was working on a book, because I had a contract, because writing was what I’d done my whole life.

It still mystifies me when I go to a place like Cusco in Peru, or Katmandu, or Fez, and see people sitting in Internet cafes checking their email and Facebook Pages. They’re engaging online when they could be out engaging with the people, sights, and byways of the cities they’re visiting.

READ MORE: The Wilderness Society’s Alan Rowsome On The Economics Of Conservation

Do you think that, in trying to document every moment of our travels, we’re losing something?

I don’t want to judge anyone else’s behavior. But when I travel, I prefer being disengaged  from everything except my present circumstances. Nowadays it’s not just travelers who are behind their computers and smart phones, but people in the country you’re visiting.

When I last trekked to Nepal in 2008, the Sherpas and porters were on their iPhones and iPads. It was nothing like the experience I had many years ago, when I was having conversations with these people about their lives, sports ,and culture. It is really a polarizing technology: It gives the illusion of creating community but, in fact, it limits us. To me, it is the antithesis of what travel is all about.

What inspired you to start Ethical Traveler?

There’s a certain point in people’s careers where they get a sense that they’ve taken a great deal from the world and have an urge to start giving back. The seed of Ethical Traveler came from an announcement made by Aung San Suu Kyi around 10 years ago, when she was still under house arrest. She asked travelers not to visit Burma until there was regime change, because the money was supporting a murderous junta.

Her words turned on a light bulb for me. I thought, “Wow, travelers really are a huge untapped political action group! What if there was some way to combine their voices in order to promote human rights and social change?” A lot of countries rely on tourism dollars. especially in the developing world. We can and should exert pressure on those countries to do the right thing with the environment, social welfare, and how they use the resources we, as travelers, are bringing in.

READ MORE: What is Ecotourism? (History & Principles of Responsible Travel)

Can you talk about the future of sustainable travel, and how you’d like to see travel bloggers contributing to it?

I think there are some interesting points of connection– not just through bloggers, but through all travelers. As Arthur C. Clarke once told me, it’s much easier to predict the future 500 years from now than 10 years from now. With technology advancing so quickly, and the advent of wearable devices like Google Glass, it’s hard to know how we will document our experiences in the future.

I can envision a dystopian future, where everyone is wearing their Google Glass, and it’s this tremendous festival of narcissism with everyone documenting their own life instead of really living it. But I can also see a future in which bloggers and other travelers– anyone with a smart device– can be part of the conversation about what’s working and what’s not in the developing world. Where is the school that was supposed to be built, which is just a pile of bricks because local officials have taken the money?

Let’s document that via a social network. Let’s be the eyes and the ears of the world, to keep things honest and make sure that the money travelers bring to countries is actually used to improve the lives of the people we’re visiting. I think that would be an immensely valuable direction for bloggers to take.

While I think vacations are wonderful, nobody deserves a vacation from the realities of the world. If you’re going to travel to a place, you should always have an awareness of the problems people in those communities face, so– at the very least– you’re not making things worse.

READ MORE: What is an Eco Lodge? A Guide to “Green” Accommodations

Can you talk about your ambitions for 2014, recreating your first travel blogging trip?

At 60 years old, I don’t feel like I can carry a 60-lb backpack around the world for 9 months. What I hope to do is a two-faceted journey.

First, I’d recreate the trip virtually, using social media to reconnect with some of the extraordinary people I wrote about in my book, The Size Of The World.

Secondly, I’d physically go back to three or four places I went on that trip and meet some of those people, to see how their lives have changed during the past 20 years of evolution, both globally and technologically. I think it could be a really interesting project. –Bret Love; all photos provided by Jeff Greenwald