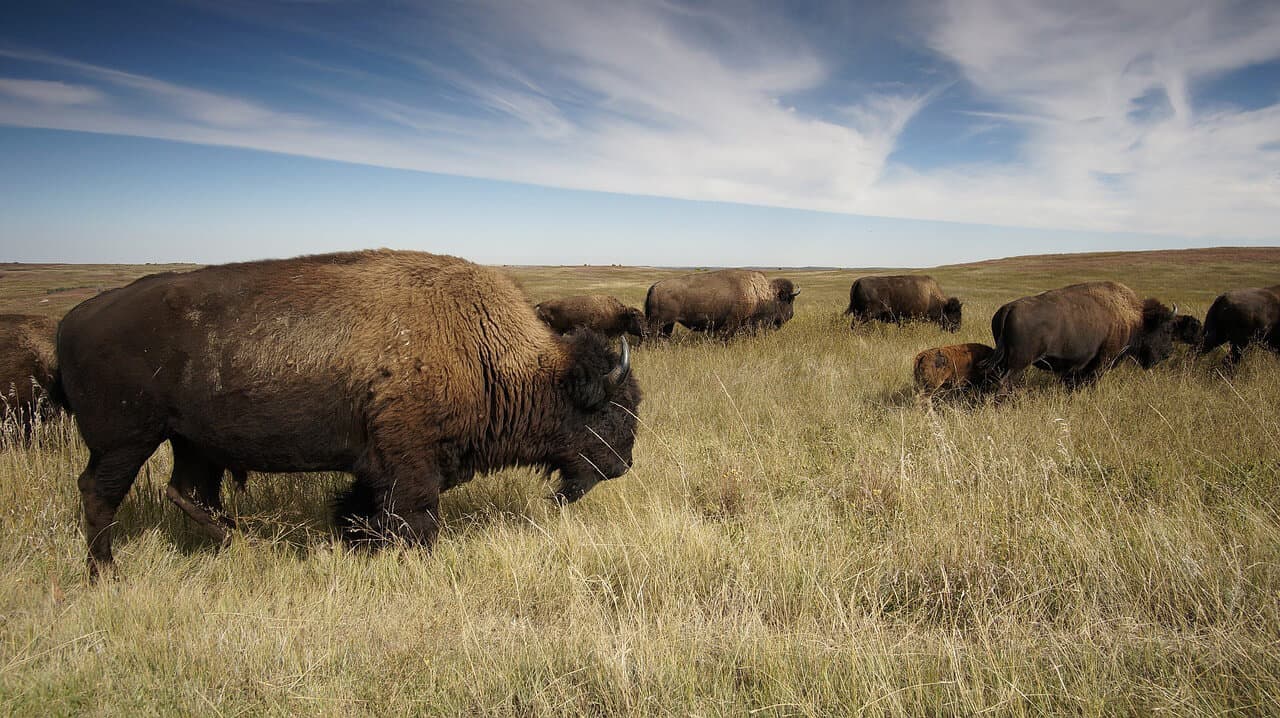 The 59 U.S. National Parks invite the public to enjoy nature, recharge their spirits, and pass on wonderful travel memories to future generations.

Ever since the National Park Service was created on August 25, 1916, the organization has been protecting and preserving our sacred public lands and the wildlife that call these areas home.

The best National Parks in the USA rival any you’ll see while traveling abroad. From the “American Serengeti” of Yellowstone National Park to California’s Channel Islands National Park, (a.k.a “the Galapagos of North America”), each park offers plenty of awe-inspiring opportunities to witness wildlife in its natural habitats.

Some of the species you’ll see there have been on the brink of extinction, but are thriving now thanks to NPS conservation efforts.

Here, we’ve gathered our picks for the 10 Best National Parks in the USA for wildlife watching. My dream is to rent an RV and visit each of them in one big trip!

READ MORE: Complete List of US National Parks by State 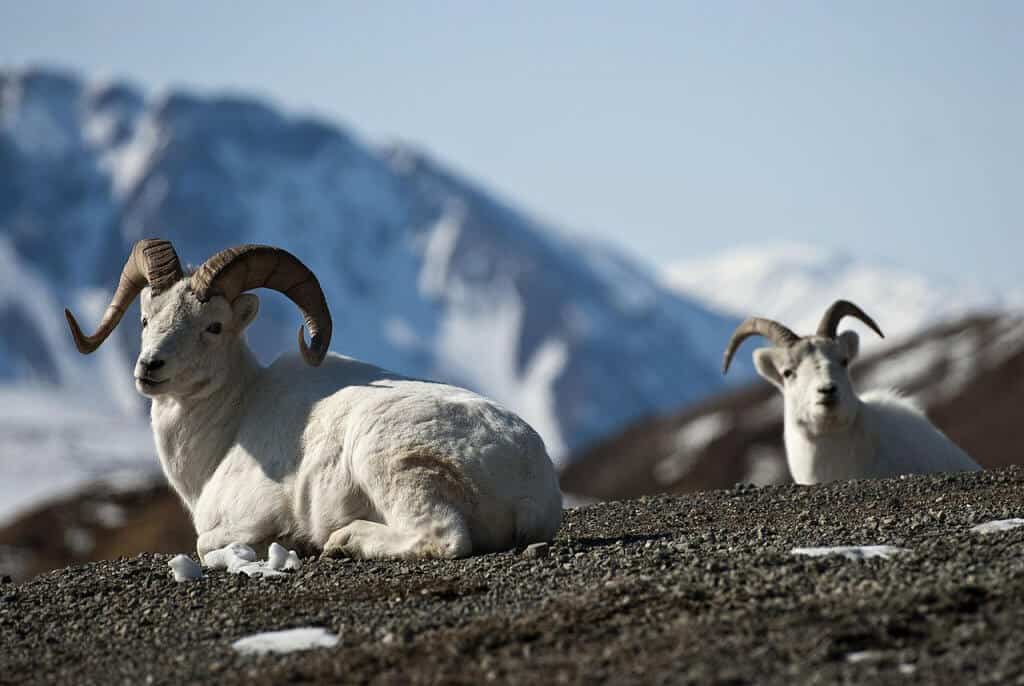 Alaska– the vast wilderness that is home to eight stunning National Parks– is where you can find America’s “Big 5” animals: Caribou, Moose, Dall Sheep, Wolves, and Grizzly Bears.

Denali, which is located in the heart of the state and spans six million acres, was created in 1917 to protect the wildlife living in the slopes and valleys of the Alaskan range.

In addition to the Big 5, the park is also home to Lynx, Wolverines, Coyotes, Marmots, and Red Foxes. Both Bald and Golden Eagles soar in the skies over mountains that seem to stretch forever.

Denali National Park also contains the nation’s highest peak. At a towering 20,310 feet, Denali (formerly known as Mount McKinley) is hard to miss when riding in park buses along the only road that leads to this majestic landscape.

The road stretches for 92 miles and offers opportunities for savoring the native fauna. Primrose Ridge is an open, high alpine area that’s ideal for hiking and sighting Dall Sheep. Birdwatchers will find plenty of opportunities for sightings along the park’s many lakes and streams. 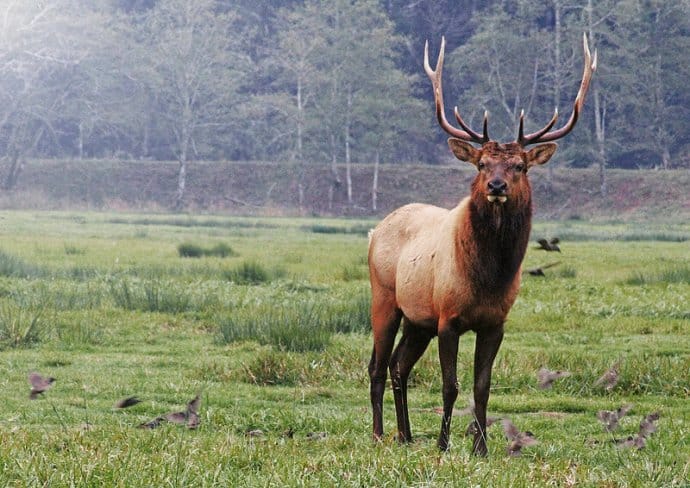 Situated in the northwest corner of Washington, Olympic National Park offers a diverse range of ecosystems, including glacier-topped mountains, temperate rainforests, and sandy beaches along the rugged Pacific coast.

In the lowland rainforests, majestic Roosevelt Elk can be spotted grazing before a backdrop of picturesque views.

The park is home to the biggest unmanaged herd of Roosevelt Elk in the Pacific Northwest. These animals are the largest of their kind in North America, with males sporting enormous antlers.

These beauties were named after President Theodore Roosevelt, who created Mt. Olympus National Monument in 1909 to protect the Elk living in the Olympic Peninsula. The area officially became a National Park in 1938.

The best location to see Elk is in Hoh Rain Forest on the park’s western side, where herds of about 20 remain throughout the year.

Near the shore, Seals, Sea Otters, and Sea Lions can be spotted. In the Spring, migrating Gray Whales are a delight. Most visitors come in the summer, but December/January is the quietest time to have the pristine wilderness almost to yourself.

Known as the “Galapagos of North America,” this archipelago of five isolated islands off the southern coast of California is home to vast colonies of Elephant Seals.

The Elephant Seal gets its name from the long, trunk-like protrusion on the face of the males.  It’s used for making loud, roaring sounds during mating rituals. Elephant Seals were hunted to near-extinction by the end of 19th Century, but their populations have since recovered.

More than 50,000 of these massive mammals breed along the coasts of the Channel Islands. Their glistening bodies can be seen on many beaches on Santa Rosa and San Miguel Islands.

If you’re up for a challenge, take the 15-mile round-trip hike to Point Bennett, on the western tip of San Miguel. They’re you’ll see thousands of honking Elephant Seals sprawled all over the beach.

Channel Islands National Park is also where you can find the adorable Island Fox, which is about the size of a house cat, with a grey coat and reddish-brown ears. This small, endemic Fox was also formerly on the verge of extinction, but was removed from the threatened list in 2016.

The Channel Islands are only accessible by park concessionaire boats (through Island Packers) and planes from Oxnard.

If you’ve ever wanted to see a Grizzly Bear in the wild, your chances are good in Glacier, which boasts North America’s healthiest Grizzly populations.

Located on Montana’s northern border with Canada, the park is a rugged expanse of snow-covered peaks and pristine alpine meadows.

In the spring and summer, Grizzlies spend their time in the valleys, lowland meadows, and aspen groves. They return to high country in the winter to hibernate. Grizzly Bears are common on the trail near Garden Wall, and it’s smart to keep a safe distance when you encounter one on the road.

There are also Lynx, Mountain Lions, White-tailed Deer, Mountain Goats, and Moose roaming the park’s million acres. In fact, the Mountain Goat– a massive all-white animal with horns and a beard– is the official symbol of the park.

They can often be seen navigating the rocky terrain high up in the mountains, thanks to hooves that are embedded with excellent traction pads and sharp dewclaws.

Summer and early fall are the two best seasons to find Mountain Goats along the aptly-named Goat Lick Overlook, along U.S. Highway 2 and Logan Pass.

Saguaro National Park is in the heart of the Sonoran Desert and separated by the city of Tucson.

Named after the towering cacti that dot the landscape, this 91,400-acre park is home to a wide range of birds and mammals.

The most prominent include Coyotes, Foxes, Jackrabbits, Kangaroo Rats, Roadrunners, and Hummingbirds. Most of these animals rest during the sweltering mid-day, so the best times to see them is in the early evening and at night.

The desert is home to a wide range of reptiles, such as Horned Lizards, Desert Tortoises, Iguanas, Sonoran Mountain King Snakes, and six species of Rattlesnakes.

When hiking or camping, always keep an ear out for the buzzing of the Rattlesnake’s tail. Other creatures to avoid include Gila Monsters (which have orange and black markings), one of two poisonous lizards in the world.

The park is busiest during the winter months, and summer here is extremely hot. So spring and fall are excellent times to visit this southwestern paradise. Spring and early summer is also the time when the desert is vibrant with wildflowers, including flowering cacti!

READ MORE: What is Glamping? An Intro to Glamorous Camping 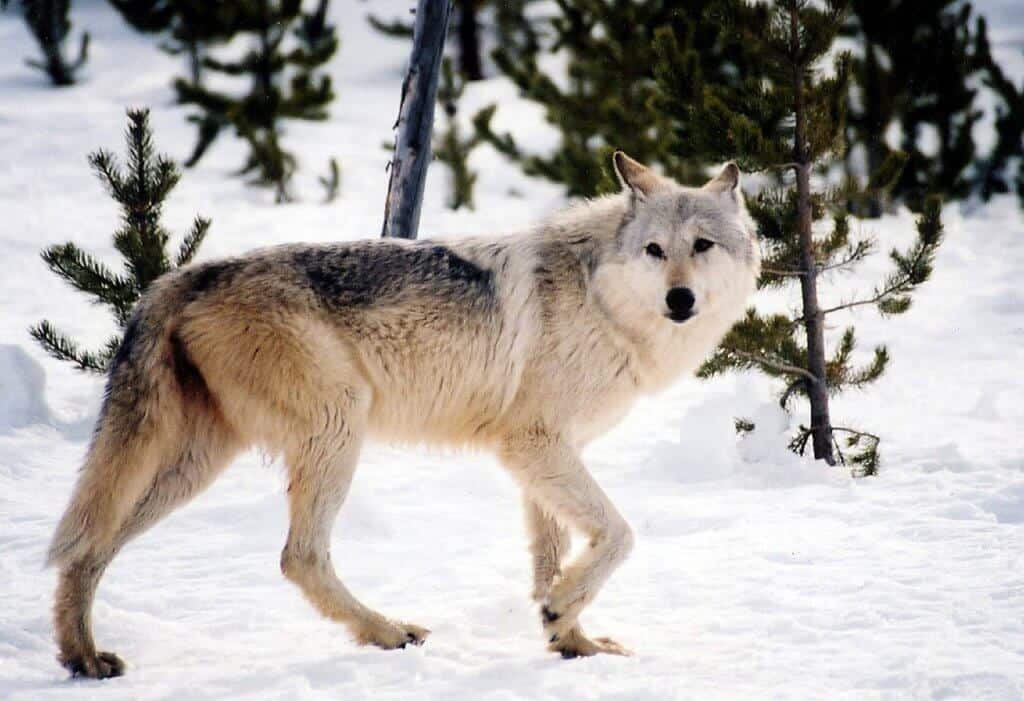 Spanning Wyoming, Montana, and Idaho, the first and arguably best National Park in the US is a sprawling 2.2-million acre wilderness.

When Yellowstone National Park was created in 1872, Gray Wolves were not protected, so predator controls led to sharp population decline. The wolves were reintroduced into the park in 1995, after a 70-year absence. As of 2015, the resident Wolf population had grown to 99 animals in 10 packs inside the park, and about 450 in the Greater Yellowstone ecosystem.

While Hayden Valley is the ideal place to see Bison, Elk, and Grizzly Bears, the Lamar Valley is the best place for spotting Wolves, especially the Druid Peak pack. Patience is key when trying to sight Wolves from the road. They’re most often observed at dusk and dawn.

Unfortunately, the park is increasingly falling victim to overtourism. Visit in late spring, early autumn, or (best of all) winter if you want to avoid the crowds.

You wouldn’t want to get too close to the biggest mammal in North America. But it’s hard to miss the American Bison roaming in Theodore Roosevelt National Park.

Weighing in at nearly a ton, these massive beasts are often found grazing with their young on the visually stunning badlands.

It’s not uncommon for park visitors to encounter a North Dakota “traffic jam” of Bison walking alongside vehicles, or holding their ground stridently. If you visit, keep your windows rolled up and respect their space by giving them a wide berth.

Make the 70-mile drive to the North Unit for a more rustic experience. But be advised that this is serious Bison territory, and not for the faint of heart. Your hike will almost definitely include silent showdowns of unafraid Bison who will do whatever it takes to protect their calves.

The Park is also home to Prairie Dogs and Wild Horses. Do the 36-mile scenic loop through the South Unit in the quirky town of Medora for scenic vistas and hiking trails. Paddling up the Little Missouri River is also an option for adventurers seeking water-based activities. 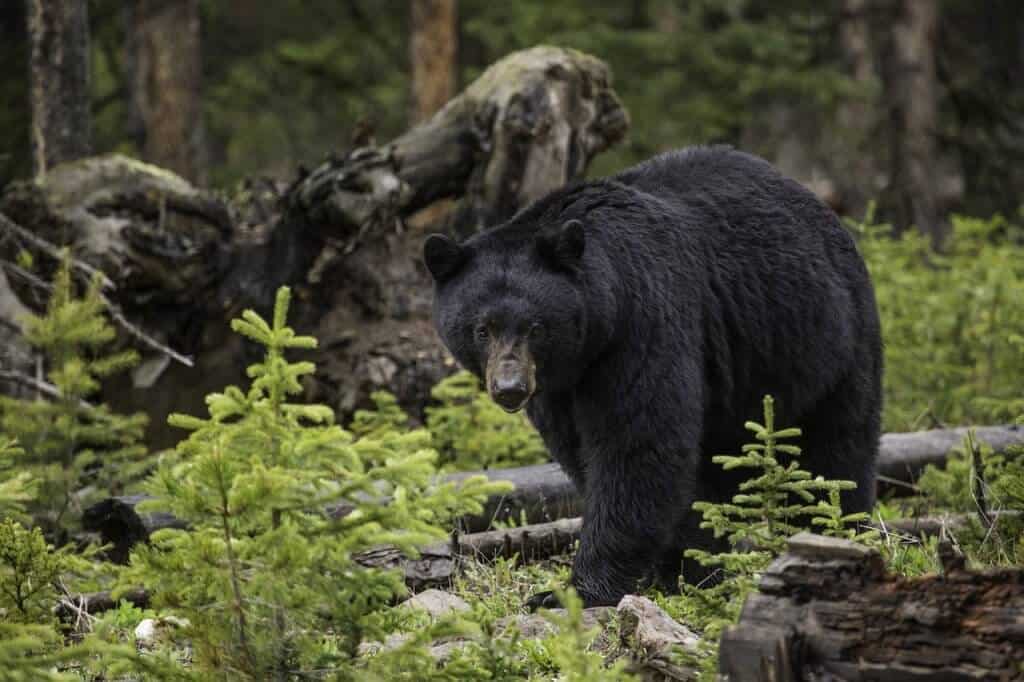 The most frequently visited national park in the U.S. Great Smoky Mountains National Park lies on the border between Tennessee and North Carolina.

The park is home to one of the world’s largest Black Bear populations, with around 1,500 living in the 522,400 acre park’s misty mountains and forests.

Though Black Bears are the smaller, less aggressive cousins to the Grizzlies of the west, always stay alert when hiking and keep your food items locked up when camping. It’s best to keep a distance of at least 150 feet if and when you encounter one.

The Bears are most active in the early mornings and late evenings in the spring and summer. They are often seen around the Cades Cove area, which is easily accessible from the 11-mile loop road.

The park is also home to one of the largest White-tailed Deer populations east of the Mississippi River. From May to June near the Elkmont campground, the Fireflies (which synchronize their flashing patterns during mating season) put on a dazzling show that illuminates the darkness. 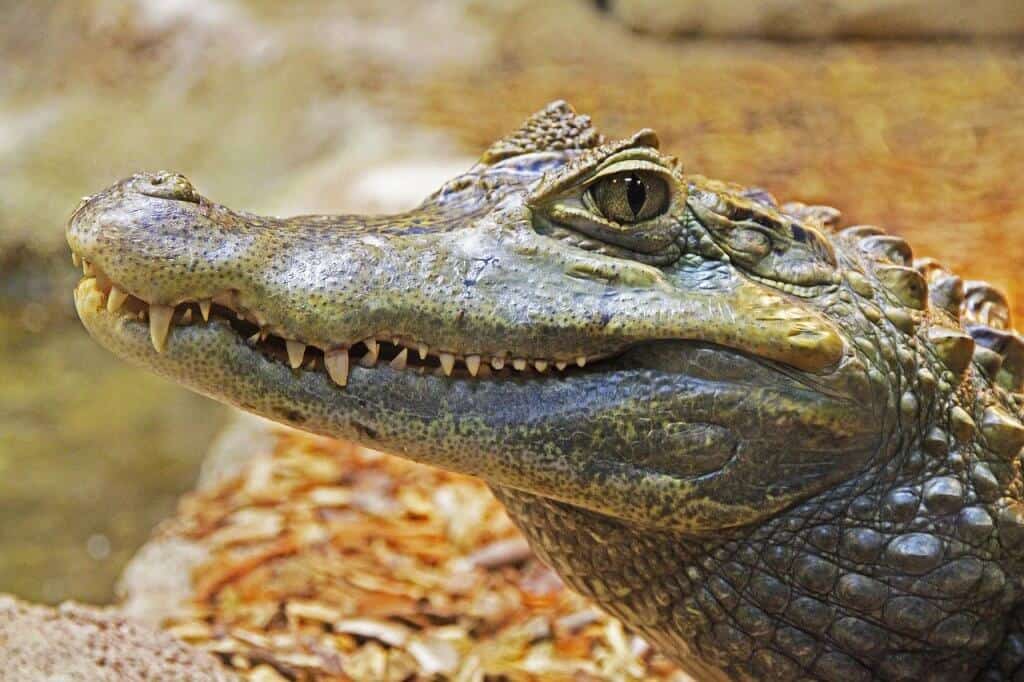 At the southern tip of Florida lies 1.5 million acres of subtropical wilderness where freshwater, seawater and terrestrial environments collide. This is a rare place where the Alligator and Crocodile live together in harmony.

There’s an easy way to identify them: The Alligator has a broad snout, while the Croc has a narrow one. The best spots to view sunning Alligators are along the Anhinga Trail in the Royal Palm section, and along the Shark Valley loop off the Tamiami Trail. Crocodiles often hang out near Florida Bay at the southern tip of the park.

The Everglades is also the premiere place in North America to see Flamingos. The population of these pretty pink birds endured a steep decline at the end of the 18th Century due to hunting for feathers and eggs. But they have resurfaced in recent years.

Birdwatchers will find plenty of other fowl to photograph, including Egrets, Ibises, Herons, and Wood Storks. Bobcats forage in the mangrove forests.

Manatees, which were recently removed from the endangered species list, can be found swimming the park’s waters. The best way to explore the park is by a boat, canoe, or kayak, although boardwalks are also available.

Virgin Islands National Park encompasses 60% of the island of  St. John, and over 5,500 acres of the adjacent ocean.

Visitors can hike its lush forests and snorkel its crystalline waters alongside vast schools of fish (and the occasional Sea Turtle) that weave in and out of the coral reefs and seagrass.

The park has the world’s first underwater sign-marked snorkeling trails, and the areas are fairly shallow and perfect for beginners. A good place to start is the self-guided trail in Trunk Bay, on the northwest shore of St. John. The entire trail lies in waters 15 feet deep or less.

On land, the only mammal native to the island is the Bat, of which there are six species. Wild Donkeys, Goats, and Sheep roam on the side of the roads. Virgin Islands National Park is a year-round destination, and adventures on both land and sea await.  –Lavanya Sankara