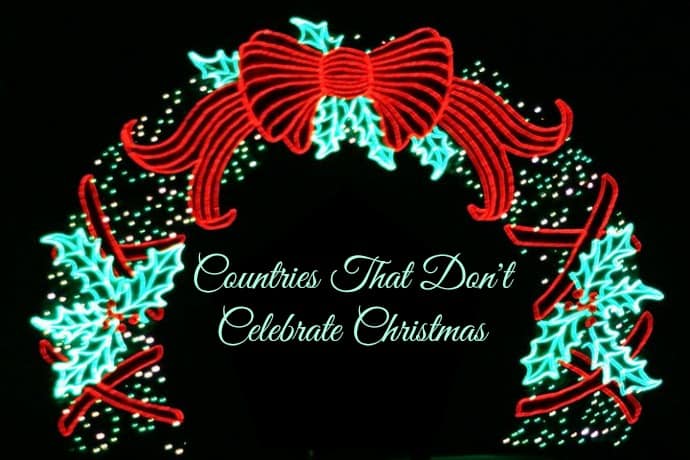 Christmas is a time of year when people around the world come together in the spirit of giving, love and hope for mankind, but there are many countries that don’t celebrate Christmas.

For Christians, Christmas is one of the most important periods on the calendar. This religious and cultural celebration is observed by billions of people annually on December 25.

Christian countries re-enact nativity scenes, which depict the birth of Jesus Christ. They also partake in religious observances such as midnight Mass.

Christmas traditions vary considerably from country to country. The people of many different nations install and light Christmas trees, hang advent wreaths, and put out their Christmas stockings for Santa Claus to fill with treats.

(Check out our fascinating story on the history and other names for Santa Claus around the World!)

But while it has its roots in religious traditions and symbols dating back thousands of years, there are many countries that do not celebrate Christmas.

According to the Pew Research Center, “As of 2010, Christianity was by far the world’s largest religion, with an estimated 2.2 billion adherents, nearly a third (31%) of all 6.9 billion people on Earth.”

However the rest of the world (approximately 69%) follow a variety of different religions that may or may not celebrate Christmas.

The following are just a few of the dozens of different places around the world where December 25 is just another day.

If you’re a traveler looking to escape the hustle and bustle of Christmastime in the western world, these countries may just be the perfect place!

Most of the people who live in Afghanistan are Islamic, so they don’t celebrate Christmas at all. Instead, they celebrate holidays such as Nowruz, a.k.a. Persian New Year.

This year Nowruz will be celebrated March 21-22, as it actually marks the first day of Spring for the northern hemisphere. This annual cultural festival symbolizes new beginnings and the rebirth of nature.

More than 300 million people around the world celebrate Nowruz, including much of Afghanistan.

There, the celebration will last about two weeks and consists of hosting parties, cooking traditional food, and special events like the Red Flower Festival, where attendees will see red tulips blooming.

Because Christians make up less than 1% of the country’s total population, Bhutan does not celebrate Christmas. Much of the country practices Buddhism, which has been around for over 2,000 years now.

There are several other holidays that are celebrated during the season, including the winter solstice, lunar new year, and Bodhi Day (a.k.a. the Day of Awakening).

Bodhi Day is the day in which they celebrate Gautama Buddha’s enlightenment, and his reaching of nirvana. The date is based on the lunar calendar, so it usually falls sometime in December or January.

Interestingly, those who celebrate this holiday decorate a ficus tree in a similar way that Christmas trees are decorated.

This tradition comes from the Buddha meditating under a tree for 49 days. On the morning of the 8th day of the 12th moon of the year, he awoke from his meditation as an enlightened man.

Buddhists celebrate Bodhi Day by meditating, performing kind acts for others, studying their texts, and cooking a special meal of tea and cakes.

READ MORE: 10 Reasons Why Bhutan is the Happiest Country in the World 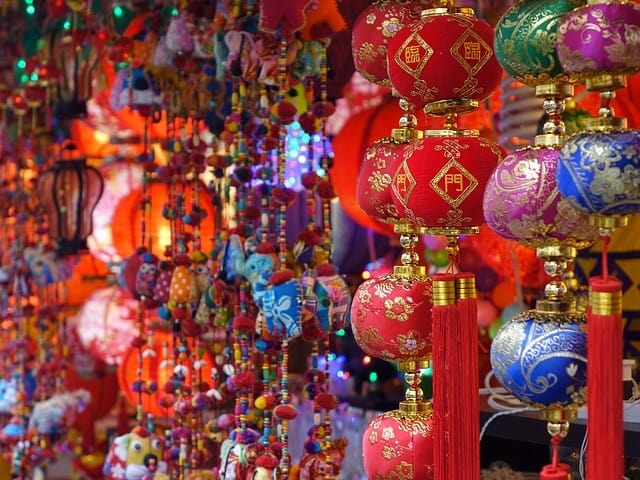 Christmas in China is just another workday. Schools, offices, and shops all remain open. But while December 25 is not celebrated as a festival or afforded a public holiday, the Chinese have picked up a few Western traditions over the years.

China is officially a non-religious state, so Christmas was once completely banned, along with Christianity.

But while the government still places restrictions against observing a Western-style holiday, the country does share in the commercial season of buying.

The commercial version of Christmas in China is only celebrated in large cities (where more people can afford it), and it’s treated more like Valentine’s Day.

It’s usually a day spent with friends, not family, and generally celebrated by heading out to the movies, shopping, or spending a romantic day with your partner.

A fun Christmas Eve tradition in China is to spend the day shopping, in fact it is the biggest shopping day of the year.

Outside of the large cities, Christmas isn’t even a commercial thing. With only 1% of Chinese people officially Christian, there is not much of a Christian cultural influence. So those in rural areas don’t celebrate the holiday at all.

Christmas is observed as a public holiday in Macau, Taiwan, and Hong Kong however, and these destinations celebrate the familiar western-style holiday.

READ MORE: The Best Ways (& Places) to Celebrate Christmas in the Philippines 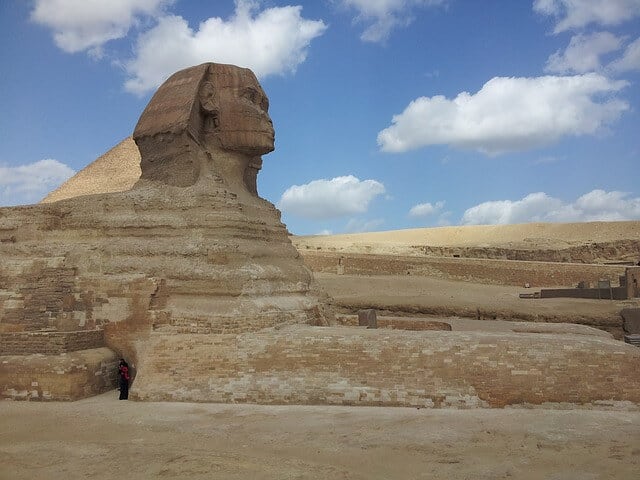 Christmas in Egypt is celebrated by the 15% of the population who are Christians (called Copts).

But as with Orthodox Christians in countries like Russia and Serbia, even faithful Christians in Egypt do not celebrate Christmas in December.

From November 25 to January 6 (a.k.a. the 43 days of Advent), Copts fast, sticking to a Vegan diet for the “Holy Nativity Fast.”

On Christmas Eve (January 6) they take mass around 10 pm, and most services finish shortly after midnight (though some continue until 4 am).

Travelers to Egypt have a unique choice: Visit during December in order to escape the holiday madness at Christmastime or visit at the beginning of January and have an opportunity to celebrate Christmas twice!

Who does not celebrate Christmas? Mongolians. Which is ironic, since Mongolia in December looks like a picture-perfect winter wonderland, complete with wild reindeer!

Mongolia is a country where travelers can witness first-hand countless traditions and cultural practices of the ancient past. But Christmas is not one of them.

Because Mongolia is officially a Buddhist country, December 25 there feels just like any other day. People go to work, children go to school, and no holiday carols play in the shops.

You may find one or two Christmas decorations strung up around main cities like Ulaanbaatar, but Christmas here is really a foreign affair.

As with Qatar, Christmas celebrations in Mongolia are largely left to the expat community.

But people in the Mongolian culture do celebrate the Lunar New Year. There are fireworks, street parties and a televised speech at midnight by the Mongolian President.

The Lunar New Year is also celebrated with a “New Year’s Tree,” which bears an uncanny resemblance to a Christmas tree! 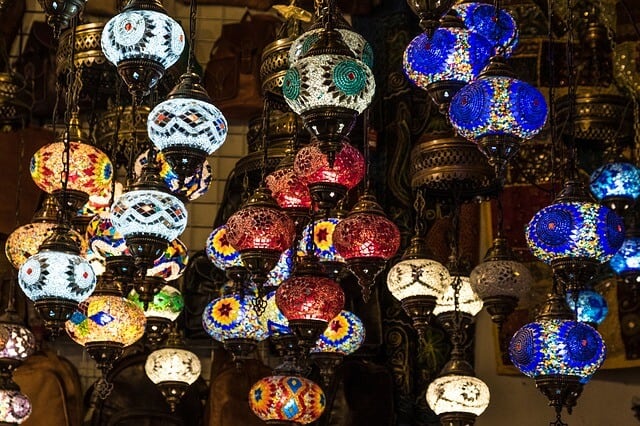 Travelers head to Morocco for many things– hiking North Africa’s Atlas Mountains, camel treks, shopping, sleeping in a famous riad– but celebrating Christmas isn’t one of them.

The Moroccan people are primarily Muslim, so it’s no surprise that Christmas in Morocco is not a big deal.

Instead of hearing the music of jingle bells and people singing carols, you’ll instead hear the beautiful sound of the adhan (the Muslim call to prayer).

So you may not be celebrating Christmas in Morocco if you visit. But you can pair mint tea with spiced lamb and lose yourself wandering the country’s many medinas and side streets.

If you do visit Morocco, be sure to head to the bustling Djemaa el-Fna (in Marrakech’s main square) to pick up some souvenir trinkets to take home as holiday gifts!

The official religion of Pakistan is Islam, so December 25th is a holiday reserved for remembering Muhammad Ali Jinnah, the founder of the country.

He was born on December 25, and most people call this day Barra Din and Wadda Din, meaning “the big day.”

Preparations for the holiday often start the first week of December, with families buying new furniture or painting their homes. Many wedding ceremonies and engagement parties are planned to fall in December.

On the night of December 24th, families anxiously watch the clock and wait for it to strike midnight so that they can greet each other joyously. Many of the elders give blessings to their children for peace, life, and love.

Fireworks are set off in the street, and many people will go to late night religious services.

40 Fascinating Facts about the Markhor (National Animal of Pakistan)

You won’t be able to tell it’s Christmas in Qatar, a non-Christian country. Any celebrations which are organized are usually arranged by the growing expat community.

The availability of festive decorations in shops has increased over the years (Doha is, after all, a modern city with extravagant malls). But these are still relatively slim pickings.

In a country which is known for its heritage souks, Islamic Art and boarding one of the biggest deserts in the world, perhaps it’s not too surprising that there’s a noticeable shortage of Christmas trees here.

Real Christmas trees in Qatar are very expensive and very rare. But for travelers craving the smell of a real Christmas tree, head to the Ritz-Carlton or a similar internationally known 5-star hotel.

These hotels annually serve Christmas Eve buffets, with holiday feasts including gingerbread and other traditional goodies.

READ MORE: The 7 Safest Countries in the Middle East for Americans to Visit

With the majority of the country being Buddhist, Thailand does not recognize Christmas as a national holiday.

But the country is very tolerant of other religions, so some Thai people do decorate their homes and host festive holiday celebrations.

Thailand tourism actually peaks during the holidays, so many resorts and hotels offer holiday dinners and Christmas events. The Thai people love a good celebration, so you may see them dressed in Santa hats or decorating their businesses.

There’s the regular New Year that we recognize, the Chinese New Year in late January or early February, and Songkran (the traditional Thai New Year) in April.

READ MORE: The 13 Most Beautiful National Parks in Thailand 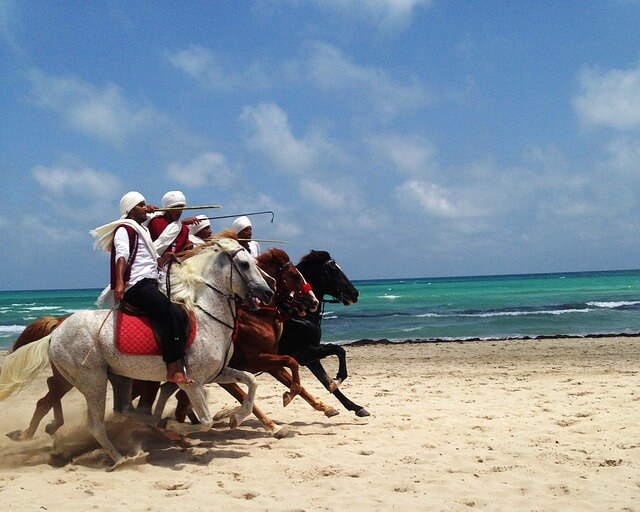 There are plenty of opportunities to celebrate Christmas in the North African nation of Tunisia, for those who want to.

Flower sellers will haggle over the price of a tree, vendors sell Christmas decorations and accessories, and you’ll never have any issue finding a unique gift in the huge variety of souks there.

Numerous local churches offer mass on Christmas Eve and Christmas Day. But, to the locals, Christmas doesn’t mean anything beyond an economic opportunity for their shops.

Head to Tunisia for an incredible warm climate and beautiful African beaches. But don’t go there expecting to catch the Christmas spirit: The holiday tends to pass without much fuss!

READ MORE: The 20 Safest Countries in Africa to Visit

What Countries do not Celebrate Christmas?

There are 34 countries that do not celebrate Christmas in the western way.

Countries that do not celebrate Christmas include:

–by Megan Jerrard with additional reporting by Samantha Dickens 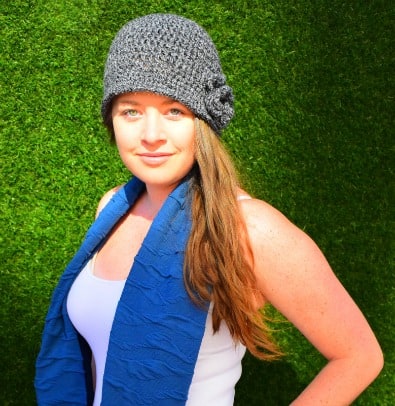 Megan Jerrard is an Australian Journalist, and the

founder and Senior Editor of Mapping Megan, an award-winning travel blog bringing you the latest in adventure travel from all over the globe. With a mission to inspire others to embark on their own adventure, Megan and husband Mike believe that travel has the potential to inspire change in people, and in turn inspire change in the world. They embraced travel as a lifestyle in 2007, and are dedicated to documenting their journey and observations through entertaining, candid articles and brilliant photography. You can follow their journey on Facebook, Twitter, Google+, YouTube, Pinterest and Instagram.